B. Fernandes tops the Custom Stats xFPL table for gameweek nine with a point score of 12.4. No player created more chances (six) than the Portuguese star and he also took four shots. Only Firmino (four) was afforded more ‘big chances’ than Wood (three). The Kiwi landed three shots on target (SoT) and also attempted two assists, notching an xFPL score of 10.6. Trezeguet (seven) took the highest number of shots but did not test the opposition keeper once, registering an xFPL score of 7.2. Mané leads the way for SoT (four), the Senegalese took five shots in the box (SiB) , notching an xFPL score of 5.5.

2. The case for Jota

Jota scored his fourth goal of the season as Liverpool trounced Leicester 3-0 and as the Stats Sandbox shows, over the last four gameweeks, no midfielder has landed more SoT than the Portugal international's six. Only Trezeguet (13) and Grealish (11) have taken more SiB than his eight and he is joint-first with Salah for ‘big chances’ (four) over that period. He trails only the Egyptian (2.48 vs 2.09) for expected goals (xG) and is second only to Fernandes (26.94) for xFPL (26.94). Meanwhile, only Ziyech (29), Ward-Prowse (31) and Fernandes (33) have registered more FPL points than his 28 amongst midfielders over the aforementioned period. It is also worth noting, he has accomplished all of the above in just 282 minutes out of a possible 360. Although his game-time may be managed by Klopp going forward, at a price of just 6.6 he looks too good to pass up.

Son and Kane registered attacking returns against Man. City in gameweek nine and their numbers are compared to popular transfer targets B. Fernandes, De Bruyne and Vardy over the last three gameweeks using the Fix Comparison Matrix. The Portugal international leads the way for FPL points (30) by some distance and is also top for xFPL (24) which indicates his returns have not been lucky. His 11 shots is only behind De Bruyne (13) and he is joint-first with the Belgian for attempted assists (eight). Vardy leads the way for SoT (six) and ‘big chances’ (five). Both Kane and Son have landed just two SoT each over the last three matches and managers are faced with a difficult decision whether to back the pair given their poor underlying numbers over the upcoming difficult fixtures. 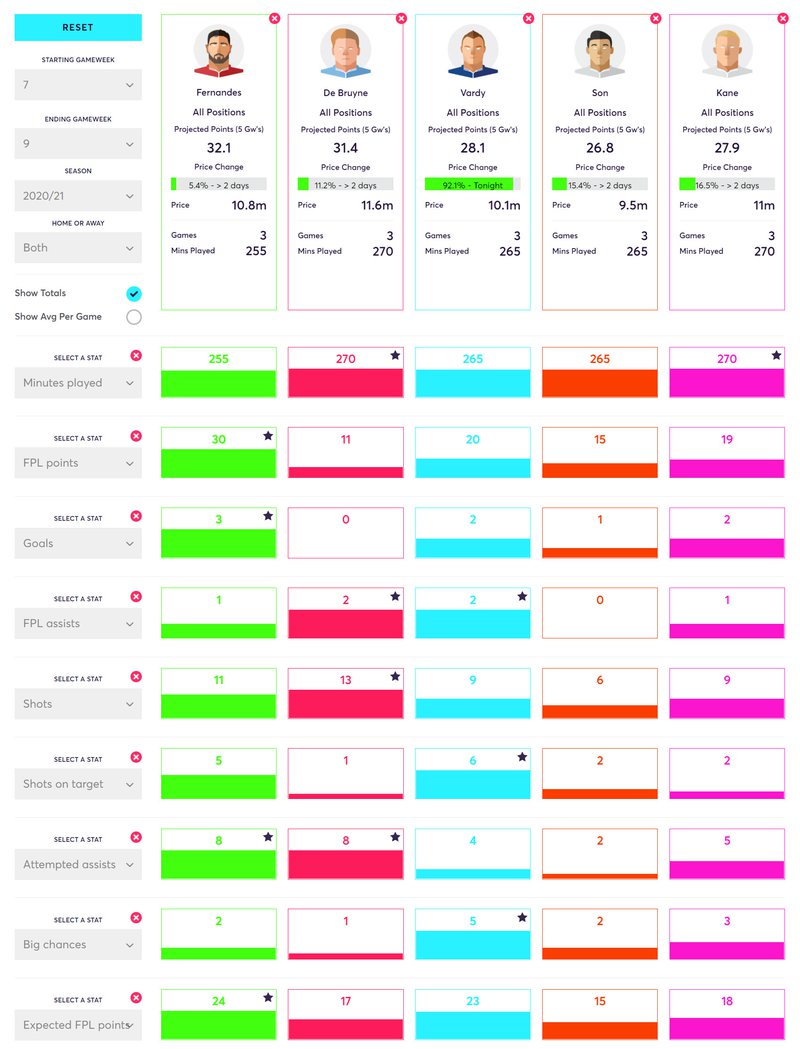