With attacking full-backs like Chilwell and Targett registering returns, it is perhaps time to focus on transfers in defence. The options are compared over the last four gameweeks using the Fix Stats Sandbox feature. Cancelo comes out top for xFPL (25.87). The Portuguese has attempted a league-high 11 assists over that period and has also taken two shots. No defender has landed more SoT than Chilwell’s four over the aforementioned period. The left-back also attempted eight assists, second only to Cancelo. Cresswell continues to impress, the Englishman has attempted seven assists compared to just one for Masuaku and three for Coufal. Maguire leads the way for shots (nine) and comes in fourth for xFPL (22.34). Van Aanholt has taken five shots and attempted two assists in just 198 minutes compared to 360 for the rest and could be a great differential.

It was a good weekend for budget strikers with the likes of Bamford and Watkins getting on the scoresheet and the most popular options are compared using the Fix Comparison Matrix over the last four gameweeks. Adams leads the way for FPL points (31) and only Bamford (four) has scored more than his three goals, the Saints man also tops the assists stat alongside Mitrovic (with two). Bamford’s underlying numbers are impressive, 18 shots is significantly ahead of second placed Mitrovic’s (13) and he also leads the way for ‘big chances’ (seven) and SoT (eight). Watkins has the lowest shot-volume (eight) looking across the players, but is second for ‘big chances’ (four). Maupay's numbers are disappointing and while Mitrovic has taken 13 shots, he has landed just two on target. 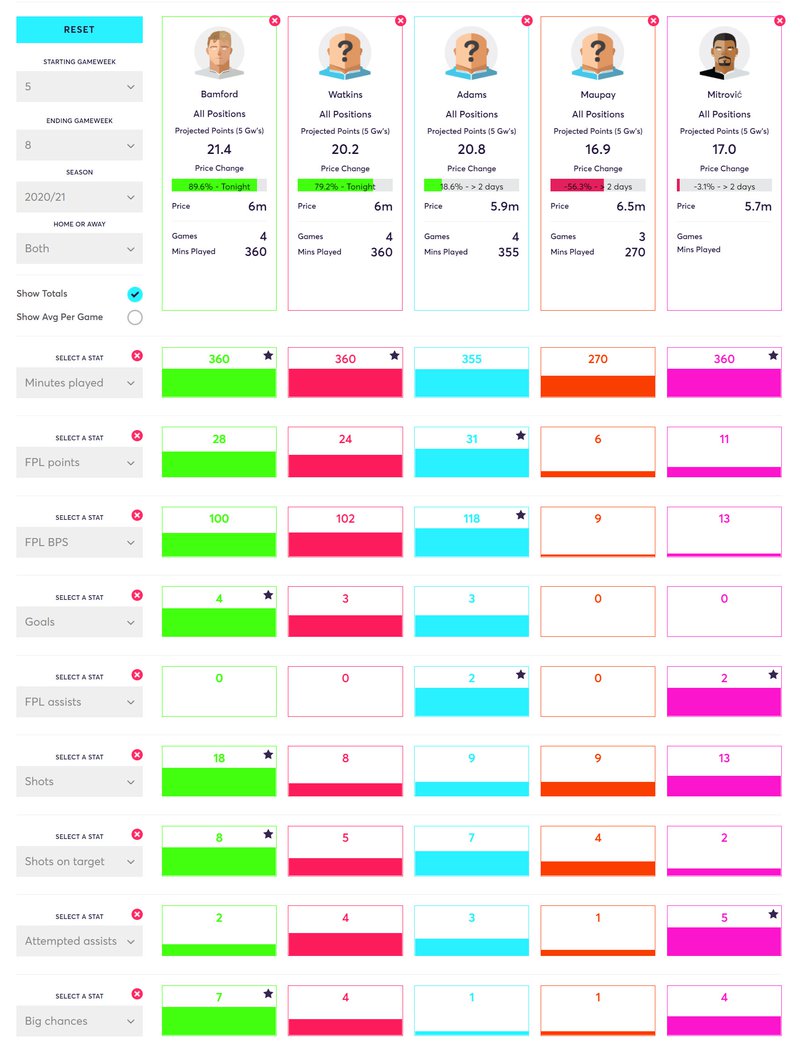