De Bruyne was unfortunate not to return against Leicester in gameweek three, attempting three assists, one of which resulted in a ‘big chance’ for Fernandinho (0.29 expected assists -xA). He was prolific home and away last season but played a direct hand in 14 goals across 18 appearances on the road (four goals, 10 assists). As the Stats Sandbox shows, only Ings (104) and Sterling (121) amassed more than his 103 Fantasy Premier League (FPL) points in away matches at an average of 5.7 points per game (PPG) for the Belgian. Man. City have scored five goals over their two matches, creating five ‘big chances’ and attempting 30 shots. They have landed 14 shots on target (SoT)  in total at an average of seven a game. Only six teams have landed more despite playing three games to Man. City’s two. Leeds have conceded seven goals so far, only Fulham (10) and West Brom (11) have been more porous. West Brom (11) are the only team to have allowed opponents more ‘big chances’ than their eight. Our Fix Algorithm currently projects a point score of 7.4 for the Belgian.

No FPL midfielder has earned more points than Salah this season (28), with the Egyptian king averaging a score of 9.3 PPG as per our Fix Heatmaps feature. The 28-year-old has produced league-leading figures of 17 total shots, 13 shots inside the box (SiB), 11 attempted assists and 35 touches in the opposition’s box. Only Mané (six) and Barnes (seven) have landed more than his five SoT amongst midfielders. The Champions have scored nine goals over their first three matches and only Leicester (12) have scored more. The Reds are also top for shots (61) and ‘big chances’ (10). Their opponents Villa have yet to concede a goal this season and have allowed opponents just three SoT. They have played a game fewer than Liverpool and have faced Sheff. Utd and Fulham, with the visit of the Champions likely to prove a far sterner test. Our Fix Algorithm currently projects a point score of 6.9 for Salah. 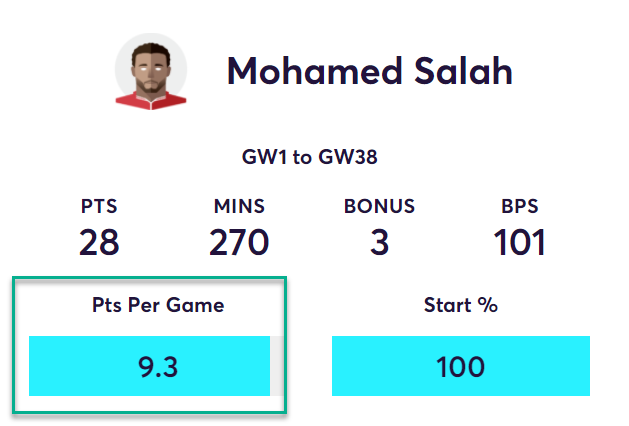 With 5.7 PPG so far this season, Rodríguez has helped revolutionise the Everton midfield with his creativity. Only Salah (11) can better the Colombian’s 10 attempted assists, while no FPL midfielder has created more than his three ‘big chances’. The 29-year-old also leads the way with a 1.41 xA figure; Harry Kane (2.32) is the only player able to better that number across all positions. He is the fifth most transferred in player this week as per our Transfer Stats feature. Everton have scored eight goals this season, only Liverpool (nine) and Leicester have been more prolific. Liverpool (39) are the only team to have taken more SiB than the Toffees’ 30 and only the Reds and Spurs have created more ‘big chances’ (10) than their nine. Brighton have conceded six goals this season and only Leeds, Wolves (both seven), Fulham (10) and West Brom (11) have shipped more. West Ham, Burnley (both seven) and Villa (three) are the teams to have allowed opponents fewer SoT than their Brighton's eight - conceding six goals from eight SoT does not bode well. Our Fix Algorithm currently projects a point score of 5.9 for James Rodriguez. 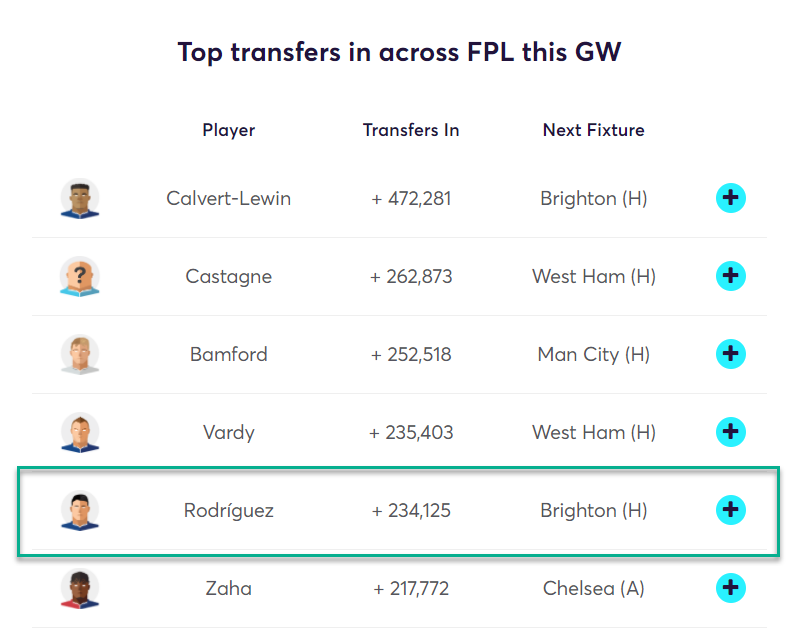 Ings has been quick off the mark this season, scoring three goals in three gameweeks and earning an average of 7.3 PPG. Amongst FPL forwards, only Mitrović (six), Kane and Calvert-Lewin (each seven) have landed more than his five SoT so far. He has been afforded three ‘big chances' just behind Maupay (four), Vardy, Calvert-Lewin and Lacazette (all five). The Saints are second for Attack Difficulty on our Fixture Analyser which makes Ings a great long term buy. Southampton have scored just three goals this season and only Burnley (two) and Sheff. Utd (zero) have scored fewer. However, only six teams have created more ‘big chances’ than their six which indicates they have been let down by poor finishing. Their opponents’ defensive numbers offer plenty of hope to improve on those numbers. No team has conceded more goals (11), SoT (24) or ‘big chances' (11) than the Baggies this season. Our Fix Algorithm currently projects a point score of 7.7 for Ings.

Robertson has returned in each of the opening three gameweeks, averaging 6.7 PPG. The Scottish left-back has continued his post-restart form from the end of last season (gameweek 30+ to 38+), where he supplied five assists in eight appearances and no FPL defender managed more. His totals of 17 attempted assists and five ‘big chances’ created also ranked first amongst players in his position. Liverpool have conceded four goals this season, only Everton, Palace (both three) and Villa (zero) have conceded fewer. They have restricted opponents to just 10 SiB, the fewest in the league. Villa have scored four goals so far and only six teams have scored fewer. Newcastle, Leeds, Fulham (all three), Burnley (two) and West Brom (one) are the only teams to have created fewer ‘big chances’ than Villa's four. Our Fix Algorithm currently projects a 50% chance of a Liverpool clean sheet and a point score of 5.2 for Robertson.