Man. Utd’s new signing Fernandes tops the Custom Stats xFPL table this week, the Portugal man created four chances and took two shots in the box (SiB) including his penalty, notching an xFPL score of 11.7. It was a great week for attacking fullbacks as Alexander-Arnold, Robertson and Van Aanholt led the creativity statistics with six chances created apiece registering xFPL scores of 11.2, 11.1 and 5.8 respectively. Ayew led the way for shots on target (SoT) (five) but none of these was a ‘big chance’ which explains his low xFPL score of 4.2. No player was afforded more ‘big chances’ than Vydra (four), the Czech took four SiB and landed three SoT leading to an xFPL score of 7.6. Jiménez (five) took more SiB than Jota (four) but the latter was afforded three 'big chances' compared to just one for the Mexican, which explains why he beats him for xFPL score (10.4 vs 6.9).

Man. Utd’s new man has got off to a flier with a goal and two assists in his first three league matches. This has coincided with an upturn in form for the Red Devils which has seen them win their last two league games and his numbers are compared to another popular Man. Utd midfielder Martial using the Fix Heatmaps for the last three weeks to see where Fantasy Premier League (FPL) managers should be investing their money. The average attacking radar indicates that the Portuguese offers more routes to points than the Frenchman. He has taken 10 shots vs. Martial’s six but it is worth mentioning that the latter beats him for SiB, with five to two. His expected goals (xG) (1.08) is higher than Martial’s (0.56) due to the penalty he took, the Portuguese has scored 21 of 23 penalties he has taken in his career and spot kick duties are another feather in his cap. In terms of creativity, it is a non contest, Fernandes has created seven chances to Martial’s two and beats him for xA (expected assists) 0.66 to 0.12. Despite Man. Utd’s upcoming tough fixtures, the Portuguese looks an excellent buy.

With popular midfielders like Fleck and Grealish not having a fixture in gameweek 28, the budget midfielders for the last four weeks are compared using the Fix Comparison Matrix to determine suitable replacements. The most creative of the lot is McNeil, who has attempted 10 assists and also appears to be the most secure in terms of minutes having played 359 over the last four matches. A fixture against Newcastle next week looks good for returns as well. H.Barnes leads the way for SiB (six) and goals (two). The Englishman was benched this week but that was likely tactical given the quality of their opponents. Rodgers is unlikely to go with a back three against Norwich and Villa and the Foxes’ winger has played the second most minutes (307) of the players under consideration. He beats his teammate Perez for SiB (six to four), chances created (five to three) and ‘big chances’ (two to one). Mount’s underlying numbers are not very impressive but he was praised by his manager for his performance against Spurs and should be nailed for Chelsea’s upcoming run of kind fixtures. Traore’s 210 minutes across four matches is worrying. Given Europa League rotation, its probably best to avoid the Wolves man for now. 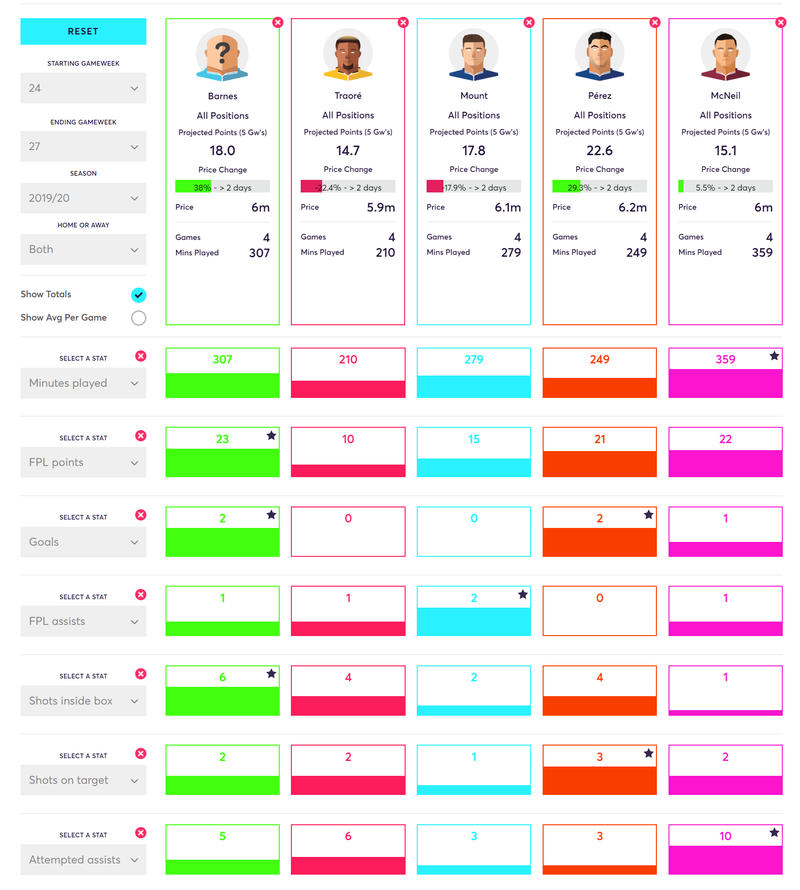