Mahrez tops the Custom Stats xFPL table for gameweek 10 with a score of 11.7. The Algerian took five shots in the box (SiB) and also attempted six assists. No player created more chances in a single match this season than Pereira’s nine against Sheff. Utd. However, only one of these was a ‘big chance’ which explains his low xFPL score of 5.8. Watkins owners can consider themselves unlucky to get zero FPL points, the forward took four SiB and also created a ‘big chance’, notching an xFPL score of 8.9. Salah’s numbers were unimpressive against Brighton, the Egyptian took just one SiB and attempted one assist, registering an xFPL score of 3.1.

It was a good week for budget midfielders with the likes of Raphinha, Ward-Prowse and Podence getting on the scoresheet and their numbers are compared for the last two weeks using the Fix Comparison Matrix. Despite playing just 110 minutes, Neto leads the way for FPL points (19), goals (two), shots on target (SoT) (four) and ‘big chances’ (two). Podence has taken more shots than Neto but was not afforded a single ‘big chance’, indicating the latter is getting into better scoring positions. Ward-Prowse seems reliant on set pieces for his FPL returns with just one SoT but given the quality of his delivery he is an excellent option. Raphinha could be an enticing option for Leeds upcoming run of favourable fixtures, the Brazilian leads the comparison for shots (eight) and trails only Bowen (five to three) for chances created. 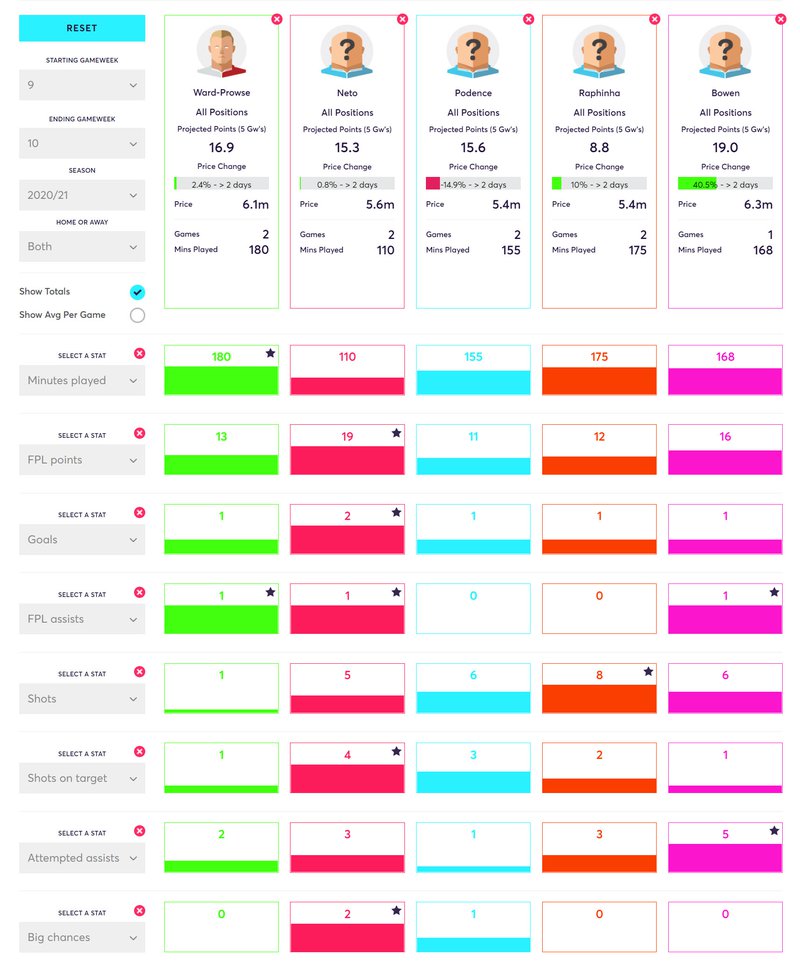 Defences seem more settled across the league after the early season deluge of goals and using the Stats Sandbox for the last two weeks, the standout picks are put under the microscope. Chelsea fullbacks Chilwell (13.66) and R. James (13.35) occupy the first and third slot for xFPL score highlighting the potential they offer at both ends of the pitch. In terms of creativity, Dallas, Targett and Robertson have all attempted four assists apiece, trailing only the injured Digne (five). Dallas also leads the way for shots (four). Dias is joint-top for SoT (two) with Konsa and Bartley which makes him an attractive asset given his consistent minutes in Guardiola’s side.