Werner took two penalties in Chelsea’s midweek Champions League game while Jorginho was on the pitch and was confirmed as the Blues’ first choice penalty taker by Lampard in his post-match interview. Only Watkins, C. Wilson (both four) and Kane (five) have scored more goals than his three over the last four gameweeks. As the Stats Sandbox shows, his total of five SoT is bettered only by Calvert-Lewin, Watkins, Kane (all seven) and Bamford (nine). Chelsea have scored 10 goals over the last four gameweeks, only Southampton, Villa (both 11) and Spurs (12) have been more prolific. Their total of 34 shots in the box (SiB) is bettered only by Villa (39), Man. City (40), Liverpool (41) and Leeds (50). Sheff. Utd have conceded six goals over the last four gameweeks, keeping no clean sheets. Only Villa (26) have conceded more SoT than the Blades’ 24 and no team has conceded more ‘big chances’ (10). Our Fix Algorithm currently projects a point score of 4.8 for the German.

Aubameyang got back on the scoresheet with a goal against Man. Utd in gameweek seven and will be looking to add to his tally as Arsenal host Villa at the Emirates. Over the last four gameweeks, the Gabonese has taken six shots, landed three SoT and created four chances. Arsenal have scored just three goals over the aforementioned period but it is worth mentioning they have played Sheff. Utd, Man. City, Leicester and Man. Utd over that run, so Arteta is likely to setup in a more attacking shape for Villa’s visit. At under 15% ownership, the Gabonese is an explosive differential and the impact on your rank can be ascertained using the Rank Prediction Machine. The Gunners have taken 36 shots and landed 14 SoT over those four matches. Villa have conceded nine goals over the last four gameweeks, keeping just one clean sheet. Only Liverpool (11) have been more porous. Only Newcastle (66) and Palace (68) have allowed opponents more shots than their 61 and no team has conceded more SoT (26). Our Fix Algorithm currently projects a point score of 5.7 for Aubameyang. 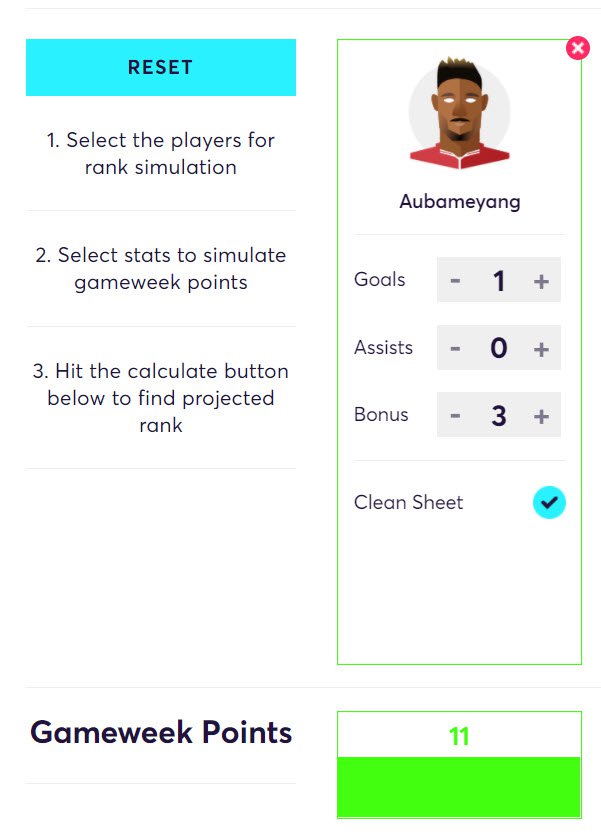