Aubameyang continued his scoring streak with his seventh goal in as many matches and only Agüero (59) and De Bruyne (63) have registered more Fantasy Premier League (FPL) points than the Gabonese’s 53. Only Pukki (15) and Abraham (12) have landed more shots on target (SoT) than his 10 and he is also ranked fourth for ‘big chances’ amongst forwards with seven. Arsenal have scored 12 goals so far, the seventh-highest in the league and only Liverpool (41), Chelsea (43) and Man. City (58) have landed more SoT than the Gunners’ 37. They are also sixth for ‘big chances’ with 15. Their opponents Bournemouth are yet to keep a clean sheet this season and and only Chelsea (13), Newcastle (13), Norwich (16) and Watford (20) have conceded more goals than their 12. Aston Villa (121), Norwich (122) and Arsenal (126) are the only teams to have allowed opponents more shots than Bournemouth’s 118 and only West Ham and Watford (both 23) have allowed more ‘big chances’ than their 20. Our Fix Algorithm backs the Gabonese to get on the scoresheet again with a point score of 6.8.

Salah blanked for only the second time this season as Liverpool struggled to a 1-0 win against Sheff. United. However, at home the Egyptian is still one of the most reliable performers around. As the Stats Sandox graph shows below, no midfielder has scored more goals on home turf than the Egyptian’s four and only Richarlison (11) has taken more shots in the box (SiB) than his nine. He is also top for ‘big chances’ (five) and expected goals (xG) (2.22). Only Man. City (14) have scored more goals at home than Liverpool’s 10 and only Chelsea (22), Arsenal (23) and Man. City (27) have landed more SoT. They are also third for ‘big chances’ with 12, trailing only Chelsea (16) and Man. City (18). Although Leicester have conceded the fewest goals (five) in the league, they are yet to keep a clean sheet on their travels. They have allowed opponents 12 SoT, an average of four a match and our Fix Algorithm backs the Egyptian to get attacking returns with a point score of 6.5. 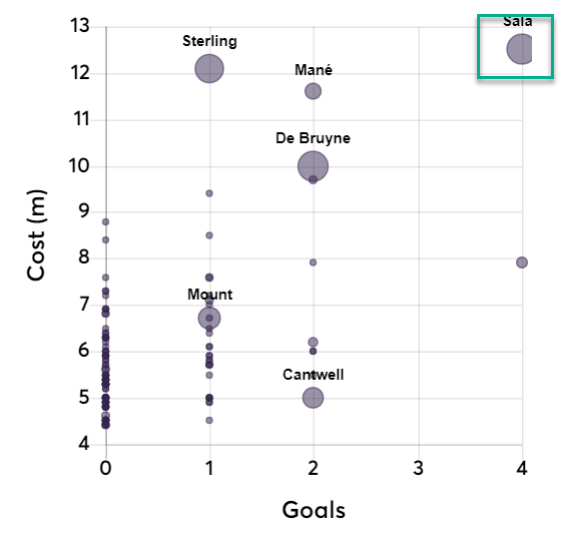 Only De Bruyne (26) has scored more than Mahrez’s 25 FPL points over the last two gameweeks and it is a surprise to see the Algerian still sitting in only 3.5% of teams at the time of writing. As the Stats Sandbox shows below, no midfielder landed more SoT than his seven over the aforementioned period and only De Bruyne (10) attempted more assists than his nine. He is also second for ‘big chances’ created (three) only to De Bruyne (four). Man. City top the attacking statistics for goals (27), shots (150), SiB (108), SoT (58) and ‘big chances’ 35. Wolves have to travel to Turkey for their Europa League contest on Thursday and although they finally got their first league win in gameweek seven, they are likely to struggle against the defending Champions. They have conceded 12 goals this season and only Chelsea (13), Newcastle (13), Norwich (16) and Watford (20) have conceded more. They have allowed 28 SoT in their seven matches at an average of four a game and are likely to be in for a long afternoon at the Etihad. Our Fix Algorithm projects a point score of 3.8 for Mahrez.