Sterling was unable to find an attacking return during the defeat to Norwich but his underlying numbers remain promising. He fired a total of six shots in gameweek five, including one against the woodwork and produced four attempted assists, two of which led to ‘big chances’. The Englishman has matched Agüero with eight shots on target (SoT) and 17 shots inside the box (SiB) this season and his total of seven ‘big chances’ ranks joint-second with Salah. No player has more than Sterling’s 4.3 expected Fantasy Premier League (FPL) involvements, while only Rashford (3.7 to 3.2) has a higher expected goals (xG) figure. As the new Stats Sandbox feature (looking at Team stats) shows below, Man. City are top across all the attacking statistics, including goals (16), shots (102), SiB (74), SoT (38) and ‘big chances’ (22). The Hornets are sure to be in for a busy afternoon, they have conceded 10 goals so far, only Chelsea (11) and Norwich (12) have fared worse. They have allowed opponents 24 SoT with only six teams allowing more. Our Fix Algorithm predicts a point score of 7.8 for the Englishman.

A goal against Norwich saw Agüero continue his run of scoring in every gameweek so far this season, with the Argentine offering an average of 9.2 points per game. The 31-year-old ranks joint-first with Abraham for goals scored (seven) and joint-top with Pukki for total goal involvements (eight) this season. No player has been afforded more than his eight ‘big chances’ or fired as many as his 19 goal attempts, while only Pukki (12 to eight) has found the target more often. As the FPL Statistics feature shows, the Argentine is owned by 62.8% of teams in the Top-1000 with his ownership rising as per our Transfer Stats feature. Man. City scored a total of 57 goals at home last season, more than any other team in the league, at an average of three a game. They created a chance every 4.6 minutes and landed 146 SoT, an average of almost four a game. Watford’s defence was also a problem last campaign, and they have retained most of the same defensive personnel. The Hornets conceded 31 away goals last season, only seven teams fared worse. They managed only three away clean sheets and allowed opponents 54 ‘big chances’ and only three teams were more obliging. Our Fix Algorithm predicts a point score of 7.5 for the Argentine. 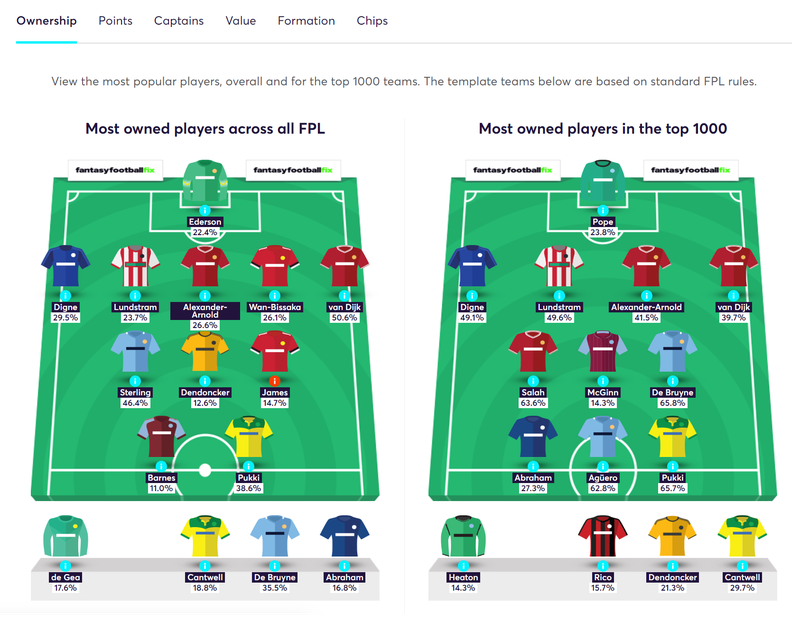 Norwich earned a stunning 3-2 win over Man. City last weekend, where Pukki netted his sixth goal of the season after unselfishly setting up Cantwell for the first goal. The Finnish international has averaged an outstanding 9.8 points per game and only Agüero has matched his total of eight goal involvements. His total of 12 SoT is four more than any other player has managed, while only Sterling and Agüero (each 17) have fired more than his 16 SiB. Norwich have scored nine goals already this campaign, with only Chelsea, Spurs (both 11), Liverpool (15) and Man. City (16) scoring more. You can access more stats on the Finn and other players using the Player Performance Report feature in the Dugout. The Canaries are currently ranked sixth for SoT, managing 24, which indicates they have merited their goals. Their opponents Burnley have only kept one clean sheet this season and only Arsenal (30), Spurs (31) and Norwich (34) have allowed opponents more SoT than the Clarets’ 34. This fixture promises to be a goalfest and our Fix Algorithm backs Pukki to get attacking returns with a projected point score of 5.0. 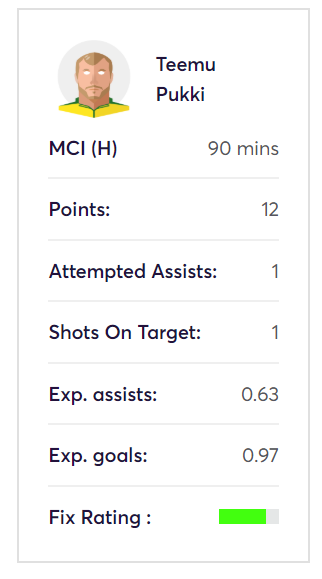 Richarlison created two ‘big chances’ during the defeat to Bournemouth last weekend and was rewarded with his third attacking return of the season. As the new Stats Sandbox feature shows when focusing on players, in the last two gameweeks, the Brazilian ranks third amongst midfielders with a total of seven shots, only bettered by Pepé (eight) and Cleverley (10). No midfielder has been afforded more than his two ‘big chances’ in that time, while only Mané (three) has recorded more than his two goals scored. Everton are ranked eighth for shots with 63 and sixth for SiB with 41, so it is clearly their finishing that has been letting them down with just 16 of these SoT, the sixth-lowest in the league. Their opponents should offer plenty of opportunities to improve that number, only nine teams have allowed opponents more SoT than the Blades’ 21 and only five teams have allowed more ‘‘big chances’’ than their 11. Our Fix Algorithm projects a point score of 4.8 for the Brazilian.

Digne has averaged a very respectable 4.6 points per game this season, keeping two clean sheets and providing two assists in the opening five gameweeks. Only Alexander-Arnold has produced more than his 12 attempted assists or his 10 successful crosses, amongst defenders. The Frenchman also leads the way for goal attempts amongst defenders, with eight, narrowly ahead of Robertson, Alexander-Arnold and Otamendi (each seven). Only Man. City (31) have allowed opponents fewer shots than Everton (42) and the Toffees are also ranked fourth for SiB conceded with 28. Sheff. United have taken only 55 shots, the sixth-lowest in the league and no team has landed fewer SoT than their 12. Everton have the second-best defensive fixture this week as per our Fixture Analyser and our Fix Algorithm projects a 50% chance of an Everton clean sheet as well as a point score of 4.8 for Digne.