Chelsea’s Jorginho tops the Custom Stats xFPL table this week, the midfielder attempted two assists in addition to his two penalties, notching an xFPL score of 13.4. Villa’s new signing Watkins put in an impressive shift against the Champions. The 24-year old took five shots in the box (SiB), the most of any player this week and was also top for ‘big chances’ (four). No player landed more shots on target (SoT) than his four, taking him to an impressive xFPL score of 12.1. Kane continues to impress, no player took more shots than the Englishman’s seven and he attempted three assists as well, registering an xFPL score of 11.7. Grealish, Son, Sterling and De Bruyne all attempted five assists each this week, registering xFPL scores of 10.9, 9.5, 7.9 and 3.8 respectively.

With Watkins, Wilson, Maupay and Antonio all getting on the scoresheet this week, managers are spoilt for choice in terms of budget forward options. The four along with the highly-owned Bamford are compared using the Fix Comparison Matrix. Antonio (two) has scored the fewest goals amongst the players under consideration, but he is top for shots (15) and SoT (eight). This is even more impressive considering they have played Arsenal, Wolves and Leicester in their last three matches. C. Wilson leads the way for ‘big chances’ but it is worth mentioning that three of his goals have been penalties. He has landed the fewest SoT (four) and only Bamford (two) has attempted fewer assists (four). Maupay comes in second for shots (12), the Frenchman has played every minute of the Seagulls’ campaign so far and only C. Wilson (six) has been afforded more ‘big chances’ than his five. He is also second only to Antonio (eight) for SoT (six). Watkins’ numbers are impressive considering he has played a game fewer than the rest but the numbers are a tad inflated by his performance against Liverpool in which Villa exploited the Champions’ high defensive line. 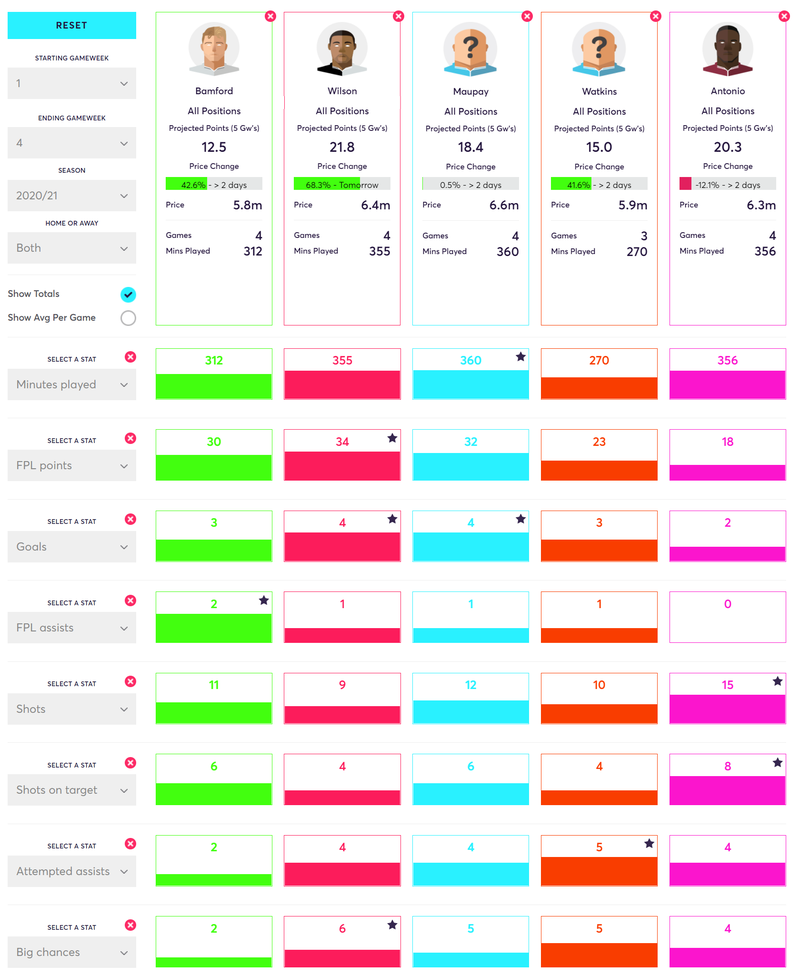 With the goals flying in everywhere and clean sheets scarce, it is more important than ever to own defenders with potential at both ends of the pitch. Using the Stats Sandbox feature, the underlying numbers for defenders are compared with Robertson (21.56) coming out on top for xFPL. Only Alexander-Arnold, R. James, Digne (all eight), Fredericks (nine) and Cresswell (ten) have attempted more assists than the Scot’s five and no defender has taken more SiB than his four. He is also joint-top with Dallas for ‘big chances’ (two) and expected goals (xG) (0.84). West Ham’s defenders Masuaku (1.18) and Cresswell (0.96) lead the way for xA (expected assists). Ayling’s numbers are impressive as well, the right-back is top for ‘big chances’ created (two) and has also landed two SoT. Castagne and Lamptey lead the way for assists (three) but it is worth mentioning that the Belgian has created just four chances in total so some regression might be expected there.