Caveat: The gameweeks added to Fantasy Premier League (FPL) for the re-launch are listed as GW36+, GW37+ and are referred to as GW45, GW46 respectively throughout the Fix website.

Salah will be looking to get back on the scoresheet after blanking in his last two fixtures. Over the last six gameweeks, no midfielder has taken more shots (28) or shots in the box (SiB) (23) than the Egyptian and he is also top for shots on target (SoT) (15). Only Antonio (nine) has been afforded more ‘big chances’ than his eight. Liverpool have scored 11 goals over the last six gameweeks and only Arsenal (12), Man. Utd. (16) and Man. City (17) have been more prolific. The newly crowned Champions also lead the way for SoT (39) over that period. Chelsea have conceded nine goals since the restart, only Brighton (11), Bournemouth, Palace, Norwich (all 13) and Newcastle (14) have allowed opponents more goals. In fact, Chelsea have kept just one clean sheet on their travels all season and only Villa have managed fewer (zero). Meanwhile, Bournemouth (34), Everton (35), Villa (35) and Newcastle (37) are the only teams to have shipped more goals on their travels than the Blues’ 33. Our Fix Algorithm currently projects a point score of 7.5 for the Egyptian.

B. Fernandes has been in sensational form since the restart with four goals over the last six gameweeks. Only Martial, Antonio (both five) and Sterling (six) have scored more amongst midfielders over that period. His total of six SoT is only bettered by Martial, Sterling (both seven), Willian (10), Antonio (13) and Salah (15). As the FPL Statistics feature shows, the Portuguese is the most owned player in the top 1000 managers squads, with 90.3% ownership. Man. Utd. have scored 16 goals over the last six gameweeks and only Man. City (17) have scored more. Their total of 16 ‘big chances’ is only bettered by Man. City (21) and Chelsea (22). West Ham have conceded seven goals over the last six gameweeks and only eight teams have fared worse. The Hammers have allowed opponents 20 SoT across those five matches. Our Fix Algorithm currently projects a point score of 6.4 for B. Fernandes. 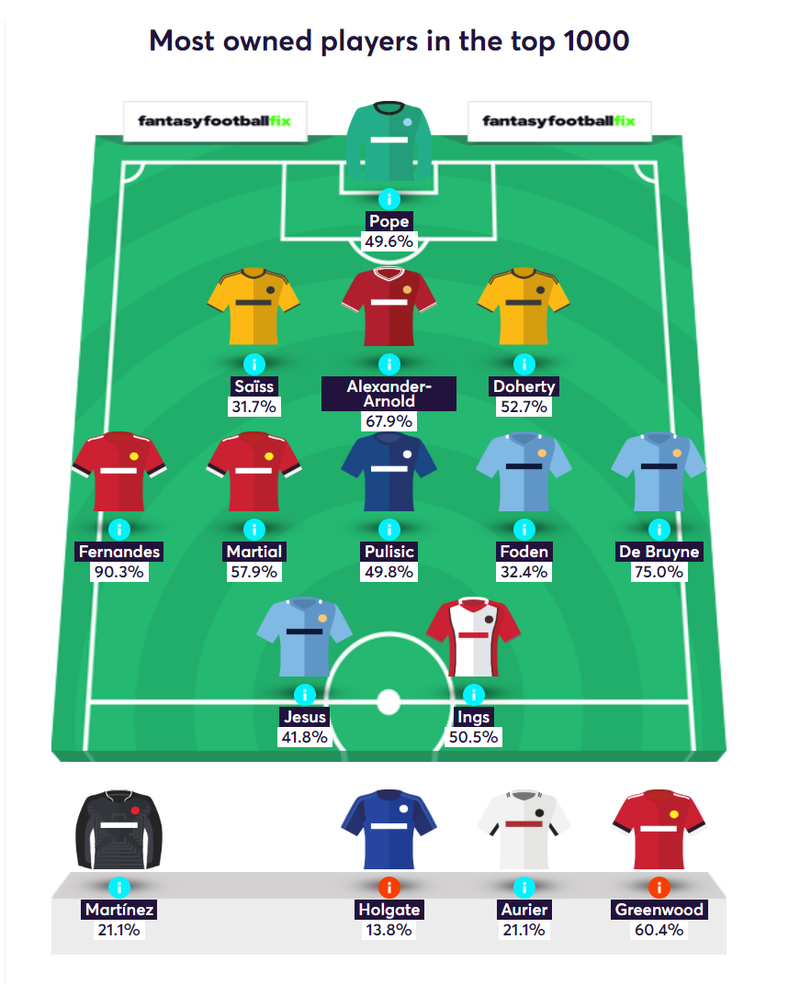 Wood took his total to 12 goals for the season with a late penalty against Wolves in gameweek 36+. As the Stats Sandbox shows, the New Zealand international is Burnley’s top scorer this season and only Jesus (31), Abraham (31) and Vardy (33) have been afforded more ‘big chances’ than his 29. 20 of his 51 SiB were headers. Burnley have scored six goals over the last six gameweeks and only eight teams have created more ‘big chances’ than their 10. Their opponents Norwich have conceded 13 goals over the last six gameweeks and only Newcastle (14) have conceded more. No team has conceded more headed chances (25) or ‘big chances’ (16) over that period. The Kiwi could be an explosive differential this week for a late surge up the ranks. Our Fix Algorithm currently projects a point score of 3.1 for Wood.