Kane was unlucky not to notch against Leeds in gameweek 35 and the Englishman is still the front-runner in the Golden Boot race with 21 goals. No forward has taken more shots (125) or landed more shots on target (SoT) (45) this season while he also leads the creativity numbers with 45 chances created and 14 ‘big chances’ created. Spurs have scored 61 goals this season, only Leicester (65), Man. Utd (68) and Man. City (72) have been more prolific. Their total of 79 ‘big chances’ is only bettered by Leicester (82), Chelsea (84), Man. Utd (87), Liverpool (94) and Man. City (99). Wolves have conceded 47 goals this season, keeping just 10 clean sheets. The Midlands side are ranked ninth for shots conceded (395) and 11th for ‘big chances’ conceded (63). Our Fix Algorithm currently projects a point score of 6.1 for Kane.

Salah is hot on Kane’s tail in the Golden Boot race with 20 goals, no midfielder has landed more SoT (46) or been afforded more ‘big chances’ (29) this season. Liverpool have scored 57 goals this campaign, only Spurs (61), Leicester (65), Man. Utd (68) and Man. City (72) have scored more. The Merseyside outfit have fashioned 94 ‘big chances’, only Man. City (99) have managed more. They are ranked second on our Fixture Analyser for the rest of the season, so it is a great time to bring in their assets. West Brom have conceded 68 goals this season, the worst defensive record in the league. The Baggies are also bottom for SoT conceded (216) while only Sheff. Utd (92) have allowed more ‘big chances’ than their 85. Our Fix Algorithm currently projects a point score of 6.1 for Salah.

Bale has scored four goals in the last four gameweeks, no midfielder has been more prolific. Greenwood (nine) is the only player to have landed more SoT than his seven over that period while only Mané, Salah, Jota (all three) and Havertz (four) have been afforded more ‘big chances’ than his two. He is owned by just 1.4% of the Top-10k as per our FPL Statistics feature making him a great differential pick. Spurs have scored nine goals over the last four gameweeks and only Leicester (10) have found the back of the net more often. The North London club are ranked ninth for SoT (19) and eighth for ‘big chances’ (eight) over the aforementioned period. Wolves have conceded six goals over the last four gameweeks, keeping just one clean sheet. The Midlands outfit are ranked eighth for SoT conceded (15) and fifth for ‘big chances’ conceded (six). Our Fix Algorithm currently projects a point score of 3.5 for the Welshman. 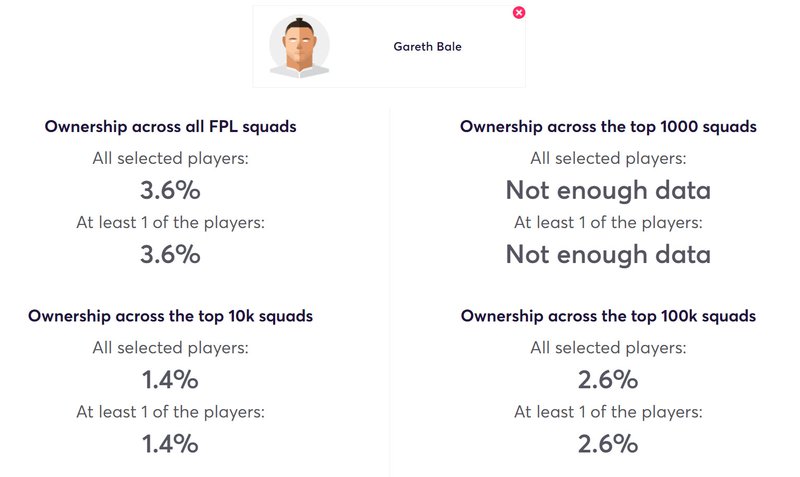