Caveat: The gameweeks added to Fantasy Premier League (FPL) for the re-launch are listed as GW35+, GW36+ and are referred to as GW44, GW45 respectively throughout the Fix website.

Since the restart, only Antonio (50), B. Fernandes (56) and Sterling (60) have picked up more points than De Bruyne (48) amongst Fantasy Premier League midfielders. The Belgian has produced league-high totals of 23 attempted assists and six 'big chances' created in that time, while no player has recorded more than his three assists. Only Willian (119) and D. Silva (129) have completed more than his 111 final third passes. Man. City have scored 23 goals since the restart with second placed Man. Utd. some way behind on 15. The Cityzens are top for all the attacking metrics – shots (139), shots on target (SoT) (49) and ‘big chances’ (29). They have the best final three fixtures in the league as per our Fixture Analyzer so investing in their attack seems wise. Bournemouth have conceded 13 goals over the same period, only Norwich (15) have been more porous. Meanwhile, only seven teams have allowed opponents more SoT than the Cherries’ 26. Our Fix Algorithm currently projects a point score of 8.8 for the Belgian.

After enjoying a 14-point haul away at Brighton, his biggest return of the season, Jesus now has two goals and three assists in the last six gameweeks. No Fantasy Premier League (FPL) forward has fired more than his 22 shots in total during that period or as many as his 20 efforts from inside the box. Only Kane can match the Brazilian’s six 'big chances' and he leads the way for expected goals (xG) with a figure of 4.08. He is a popular transfer target this week with over 40,000 bringing him in as per our Transfer Stats feature. Man. City have scored 50 goals in their 17 home matches this season at an average of nearly three a game. No team has taken more shots (357) or created more ‘big chances’ (63) on home turf. Bournemouth have conceded 32 goals in their 17 away matches so far this season, keeping just two clean sheets. Only Chelsea (33), Everton, Villa (both 35) and Newcastle (37) have shipped more goals on their travels. They have allowed opponents 41 ‘big chances’ and only Palace (42), Newcastle (48), Villa (49) and West Ham (52) have fared worse. Our Fix Algorithm currently projects a point score of 6.4 for the striker. 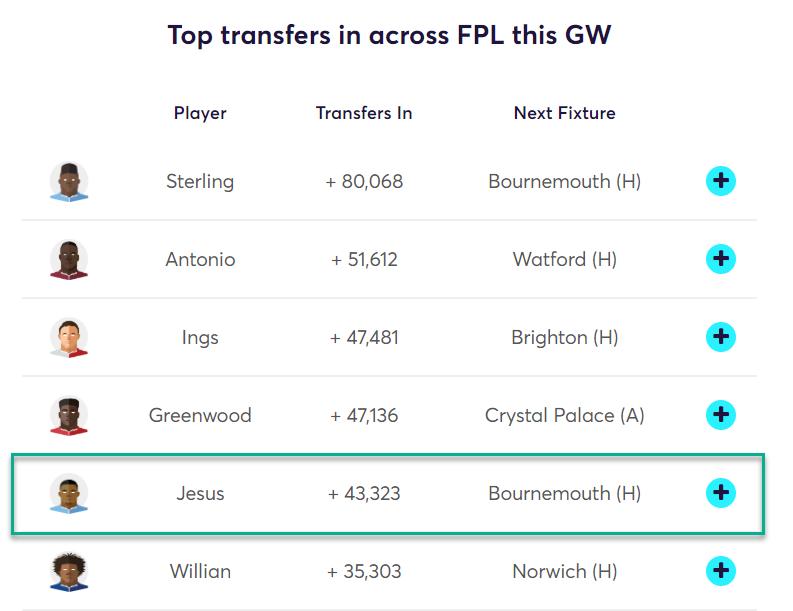 Ings has amassed four goals and one assist in five gameweeks since the restart and no FPL forward has picked up as many as his 37 points, an average of 7.4 points per game (PPG), as per our Fix Heatmaps feature. During that period (gameweek 30+ to gameweek 34+), only Jesus and Aubameyang have taken as many as his 13 shots in the box (SiB), while only Jesus (2.46) and Rashford (2.59) could better his 2.40 expected goals (xG) figure. No FPL forward has racked up as many as his 11 attempted assists or his 33 touches in the opposition’s box. Southampton have scored eight goals since the restart and only seven teams have scored more. They are also ranked seventh for SoT (26). Brighton have conceded 12 goals over the same period and only Bournemouth, Palace (both 13) and Norwich (15) have shipped in more. Their total of 67 SiB conceded is the worst in the division. Our Fix Algorithm currently projects a point score of 5.9 for Ings. 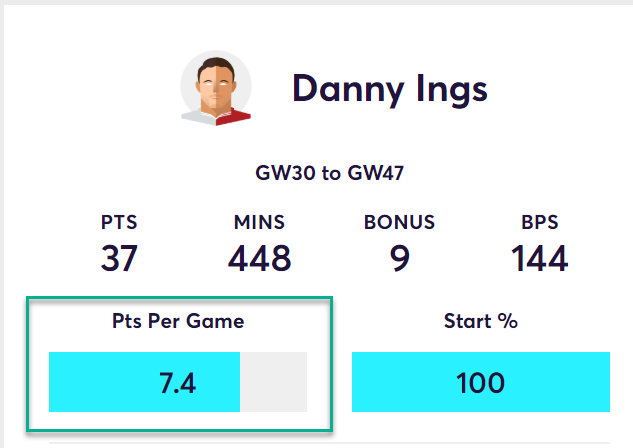 With three goals and three assists in the last six gameweeks, Pulisic has averaged 6.5 PPG since the restart. The American winger ranks joint-fifth amongst midfielders with a total of 16 shots falling just behind De Bruyne, Sterling (each 17), Salah (24) and Antonio (26). As the Stats Sandbox shows, only Antonio (48) and Salah (50) can better his 37 touches in the opposition’s box. Chelsea have scored 12 goals since the restart and only Man. Utd.(15) and Man. City (23) have found the back of the net with more regularity. Their total of 19 ‘big chances’ and 37 SoT is only bettered by Man. City (29 and 49 respectively). Norwich are already relegated following their loss to West Ham in gameweek 35+ and no team has shipped more goals (15) than the Canaries since the restart. Only Arsenal (37) have allowed opponents more SoT than the Canaries’ 34. Our Fix Algorithm currently projects a point score of 5.8 for the winger.

No FPL defender has been awarded more assists than Azpilicueta (three) in the last six gameweeks, where he has averaged 4.7 PPG. The Spaniard has attempted nine assists in that time, with only Digne (11) faring better amongst players in his position. Amongst Chelsea teammates, only Willian (2.00) can better his 0.86 expected assists (xA) figure. Chelsea have conceded 10 goals since the restart and only Newcastle (11), Brighton (12), Bournemouth, Palace (both 13) and Norwich (15) have conceded more. However, they have conceded just 21 SoT with only seven teams conceding fewer. Norwich have scored just a solitary goal since the restart and are bottom for both SoT (10) and ‘big chances’ (three). Our Fix Algorithm currently projects a 60% chance of a Chelsea clean sheet and a point score of 5.3 for the Spaniard.