Caveat: The gameweeks added to Fantasy Premier League (FPL) for the re-launch are listed as GW33+, GW34+ and are referred to as GW42, GW43 respectively throughout the Fix website.

After being benched for the defeat at St Mary’s on Sunday, De Bruyne is well-placed for a return to the starting lineup to face Newcastle in gameweek 34+. The Belgian has amassed three goals and three assists in his last six gameweeks at the Etihad, where he has averaged 7.8 points per game (PPG). No Fantasy Premier League (FPL) midfielder has attempted more assists than his 22 during home matches this calendar year, while only Salah (seven) has created more than his six “big chances”. He is the most owned player in the top 1000 as per our FPL Statistics feature. Man. City have scored 13 goals over the last six gameweeks, and only Chelsea and Man. United (both 15) have been more prolific. Their total of 97 shots can only be bettered by Chelsea (112) and the Cityzens are also top for ‘big chances’ (19). Newcastle have conceded just four goals over the same period, no team have conceded fewer. The magpies have allowed opponents just 15 shots on target (SoT) and only Wolves (13) are able to better that number. However the Tyneside club are likely to face a backlash following Man. City’s defeat to Southampton, and our Fix Algorithm currently projects the Belgian to get attacking returns with a point score of 7.5. 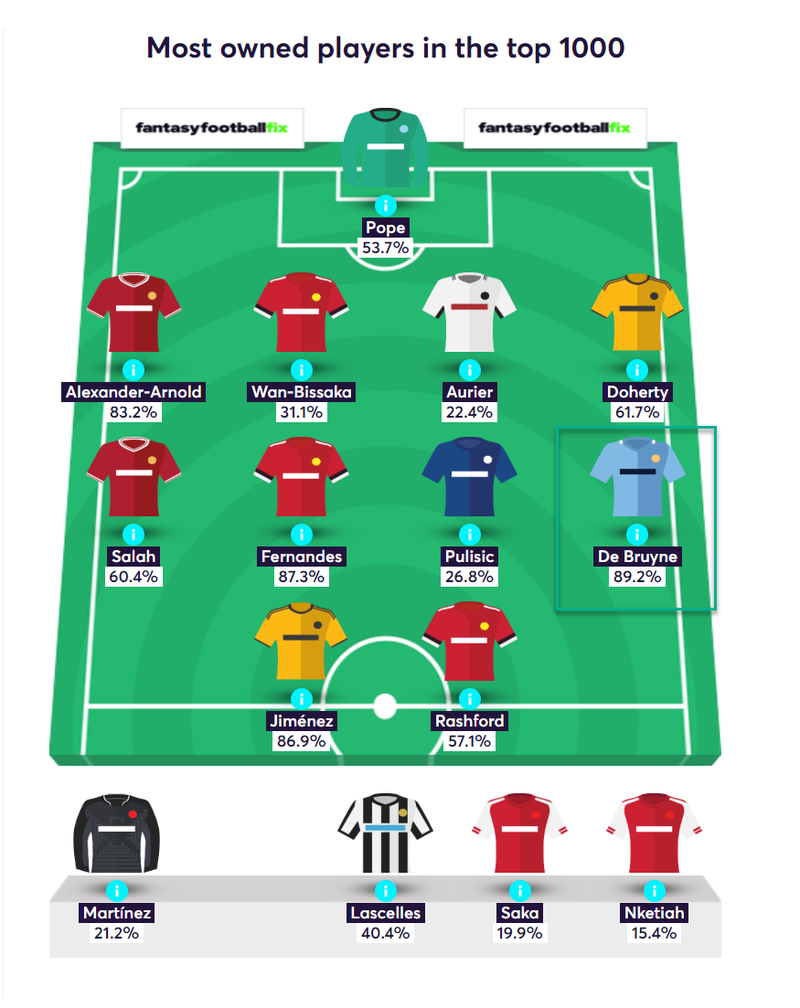 With four goals and two assists in the last four gameweeks, Martial has averaged 10.0 PPG. No FPL midfielder has had as many “big chances” as the Frenchman (four) during that period, while only Sterling (26), Pulisic and Salah (each 30) have taken more than his 24 touches in the opposition’s box. Amongst teammates, only Greenwood can match his tally of seven shots in the box (SiB), while only B. Fernandes (eight) has struck more SoT than his five. He is the fourth most transferred in player this week as per our Transfer Stats Feature. Man. Utd’s attack has been in form over the last six gameweeks, scoring a league-high of 15 goals. Only Chelsea (44) have landed more SoT than the Red Devils’ 39 over this period. Solskjaer's men have created 15 ‘big chances’ with only Newcastle, Chelsea (both 17) and Man. City (19) creating more. Villa have conceded 10 goals over the last six gameweeks and only Bournemouth (16) have been more porous. The midlands club have conceded 22 SoT over those six matches, an average of nearly four a game. Our Fix Algorithm currently projects a point score of 5.4 for Martial. 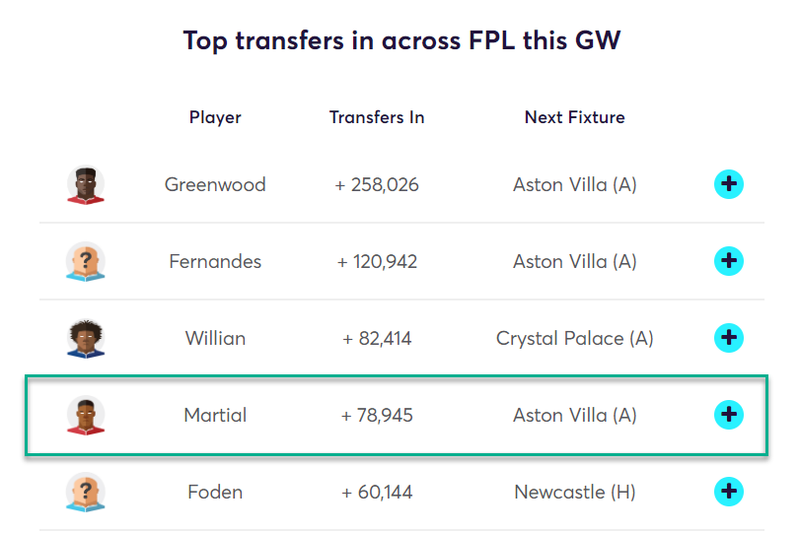 Having recovered from injury during the break, Kane has scored twice in three games since the restart. As the Stats Sandbox shows, no FPL forward can better his four “big chances” or his 2.18 expected goals figure (xG) since play resumed, while only Giroud (11), Jesus (13) and Aubameyang (17) have fired more than his 10 shots. The 26-year-old ranks top amongst teammates with totals of five SIB and four SoT. Spurs have scored seven goals over the last six gameweeks and only nine teams scored more. The North London club have created nine ‘big chances’ and landed 16 SoT over those five matches. Bournemouth have the worst defensive record in the league over the last six gameweeks, conceding 16 goals and keeping no clean sheets. No team have allowed opponents more SoT than the Cherries’ 33. Our Fix Algorithm currently projects a point score of 5.6 for Kane.

Deeney is yet to add to his total of eight goal involvements (six goals, two assists) this season since the restart, but has found the majority of his returns at Vicarage Road. As the Fix Heatmaps feature shows, the Watford captain has amassed four goals and two assists over 11 home appearances, to average 4.0 PPG. His total of eight 'big chances' at home ranks top amongst teammates, while no FPL forward has created more than his six 'big chances', matched only by Firmino. Watford have scored 18 goals in their 16 home matches this season and the underlying numbers indicate that it is their finishing, not their quality of chances that has let them down. Only six teams have created more ‘big chances’ on home turf than the Hornets’ 36. Norwich look destined for the drop and have conceded 10 goals over the last six gameweeks, only Bournemouth (16) have fared worse. The Cherries (33) are the only team to have allowed opponents more SoT than the Canaries’ 30. Our Fix Algorithm currently projects a point score of 4.5 for the striker. 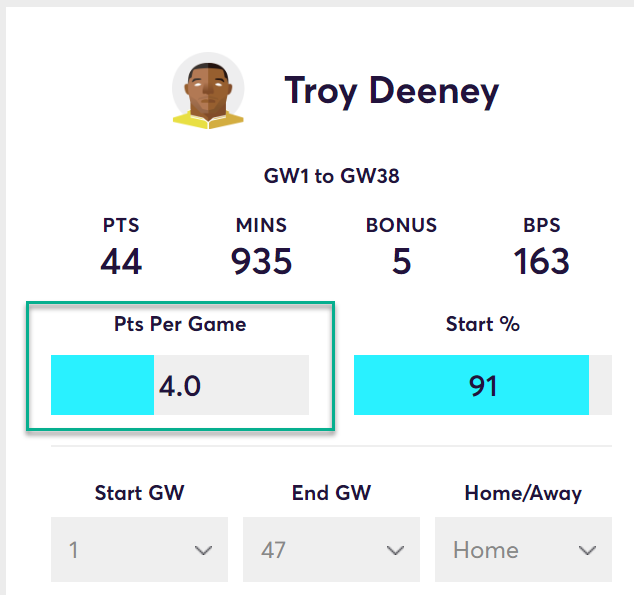 Since the restart, only Azpilicueta (three) has picked up more assists than Wan-Bissaka (two) amongst FPL defenders. Just five defenders have attempted more assists than the Man. Utd. right-back (four), while only Alexander-Arnold (56), Shaw (67) and Azpilicueta (72) have completed more final third passes than his 54. Chilwell (18), Alonso (20), Azpilicueta (22), Baldock (23) and Alexander-Arnold (34) are the only defenders to have attempted more crosses than his 17. Meanwhile no team has conceded fewer goals than Man. United’s four over the last six gameweeks and only Wolves (four) have kept more clean sheets than their three. Meanwhile, Everton (31), Wolves (31) and Leicester (30) are the only teams to have allowed opponents fewer shots in the box (SiB) than their 32. Villa have scored just two goals over the last six gameweeks, while Norwich (one) are the only team to have fared worse. Villa have created just eight ‘big chances’ with only Everton, Sheff. Utd (both seven), Southampton (six), Brighton (five) and Norwich (four) creating fewer. Our Fix Algorithm currently projects a 40% chance of a Man. Utd clean sheet and a point score of 4.4 for the right-back.