Having notched two goals and an assist against Leeds in the reverse fixture, B. Fernandes will be fancying his chances of getting on the scoresheet again. The Portuguese has taken 14 shots over the last six gameweeks, only Armstrong, Jota (each 15), Greenwood (17) and Salah (20) have attempted more amongst midfielders. His total of four ‘big chances’ can be bettered only by Havertz, Mane and Lingard (all five). Only Havertz and Lingard (each nine) have landed more shots on target (SoT) than his eight while only De Bruyne (12) and McNeil (13) have created more chances than his 11. Man. Utd have scored 11 goals over the last six gameweeks, only West Ham, Man. City (each 13) and Spurs have been more prolific. No team has fashioned more ‘big chances’ (18) than the Red Devils over that period. Leeds have conceded just six goals in as many gameweeks but the underlying numbers show that B. Fernandes should still find plenty of opportunities. No team has conceded more shots (99) or SoT (34) than Leeds over the aforementioned period. Our Fix Algorithm currently projects a point score of 7.4 for B. Fernandes.

Salah should be nailed to start against Newcastle after his rest in gameweek 32 and has scored in two of his last three appearances in the league. No midfielder has taken more shots (20) over the last six gameweeks and the Egyptian is also top for shots in the box (SiB) (15). Only Mane, Havertz and Lingard (all five) have been afforded more ‘big chances’ than his four. The Egyptian is owned by 75% of the top 1000 as per our FPL Statistics feature and will be a popular captaincy option this week. Only Man. City (101) have attempted more shots than Liverpool (84) over the last six gameweeks and the Reds’ total of 31 SoT is bettered only by Man. Utd (32), Southampton (34), Man. City and Chelsea (each 37). Newcastle have conceded nine goals over the last six gameweeks, keeping just one clean sheet. The Magpies are ranked 16th for both SiB conceded (55) and SoT conceded (29). Our Fix Algorithm currently projects a point score of 6.7 for Salah. 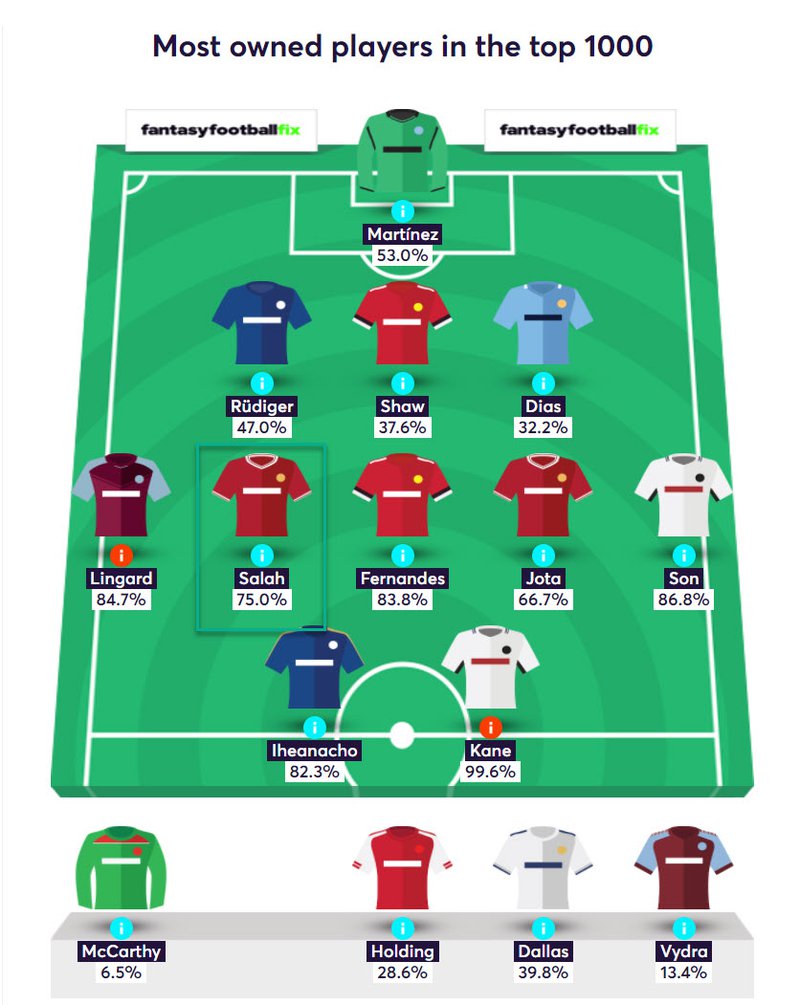 Iheanacho has scored six league goals in as many gameweeks and the Nigerian continued his strong run of form by finding the back of the net against Southampton in the FA Cup Semifinal. Only Kane (seven) has scored more amongst forwards over that period while only Bamford (six) and Kane (seven) have been afforded more ‘big chances’ than his five. As the Stats Sandbox shows, his total of eight SoT can only be bettered by Wood (nine) and Kane (11). Leicester have scored nine goals over the last six gameweeks, only Arsenal (10), Man. Utd, Man. City, West Ham (each 13) and Spurs (14) have found the back of the net more often. They are ranked 12th for ‘big chances’ (11) over this period, despite playing just four matches. Palace have conceded nine goals over the aforementioned period, keeping just one clean sheet. Only Southampton (17), Burnley and Sheff. Utd (each 18) have allowed opponents more ‘big chances’ than the Eagles’ 16. Our Fix Algorithm currently projects a point score of 3.9 for Iheanacho.