Salah was surprisingly left out of the starting XI against Leeds, having scored in each of his previous two Premier League outings. In the last four gameweeks, no midfielder has fired as many as his 14 shots, while only Greenwood and Jota can equal his 11 shots from inside the box (SiB). Only Kane (six) has racked up more than his four ‘big chances’ across all positions. He is the third-most transferred in player this week as per our Transfer Stats feature. Liverpool have scored seven goals over the last six gameweeks and only Man. City (88) have attempted more shots than their 84. The Reds’ total of 31 shots on target (SoT) is only bettered by Man. Utd (32), Man. City (34) and Chelsea (37). Newcastle have conceded nine goals over the last six gameweeks, keeping just one clean sheet. The Magpies are ranked 17th for both SiB conceded (55) and SoT conceded (29). Our Fix Algorithm currently projects a point score of 6.6 for Salah. 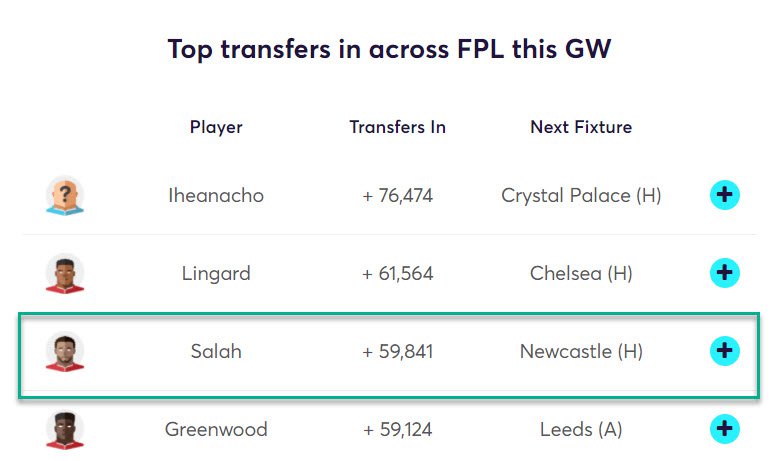 Vardy has failed to register a goal since his strike against Liverpool in gameweek 24 but has provided four assists in his last seven gameweeks. During that period (gameweeks 25 to 31), no forward has fashioned as many as his four ‘big chances’, while only M. Pereira (five), Raphinha and Son (each six) have created more across all positions. Totals of nine SiB and three ‘big chances’ rank second only to Iheanacho (14 and seven), amongst teammates. As our FPL Statistics feature shows, he is owned by less than 10% of the Top-10k managers making him a great differential. Leicester have scored nine goals over the last six gamweeks, only Arsenal (10), Man. Utd, Man. City (each 11), Spurs (12) and West Ham (13) have been more prolific. The Foxes are ranked 11th for ‘big chances’ (11) over this period, despite playing just four matches. Palace have conceded nine goals over the last six gameweeks, keeping just one clean sheet. Only Burnley and Sheff. Utd (each 18) have allowed opponents more ‘big chances’ than the Eagles’ 16. Our Fix Algorithm currently projects a point score of 6.3 for Vardy. 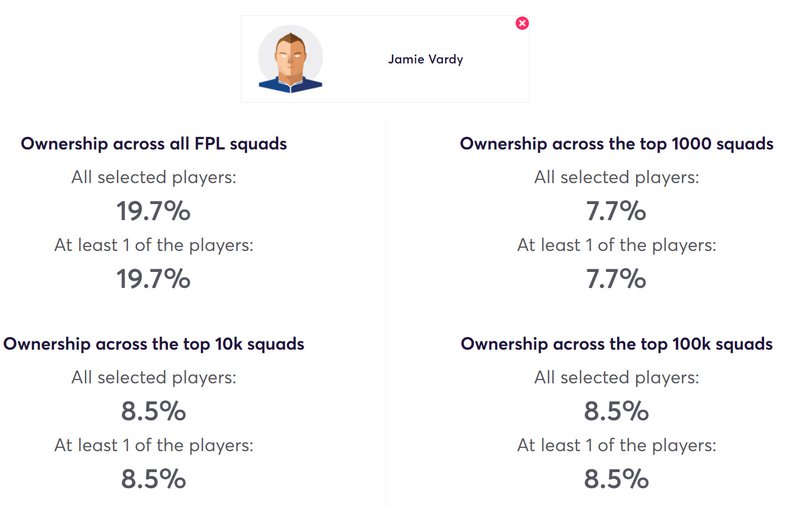 Watkins has bagged two goals and an assist in his last four gameweeks, averaging 5.5 points per game as per our Fix Heatmaps feature. Amongst forwards, priced under 8.5, only Welbeck, Antonio, Bamford and Maupay (each six) have provided more than his five attempted assists in that time (gameweeks 28 to 31). No teammate has recorded a higher expected goals (xG) figure (1.01), while only Trézéguet (eight) can better his five SiB. Villa have scored five goals over the last six gameweeks and are ranked 16th for shots (55) and 17th for SoT (17). West Brom have conceded just three goals over the same period and are ranked fifth for SiB conceded (47) and sixth for SoT conceded (20). Our Fix Algorithm currently projects a point score of 4.3 for Watkins. 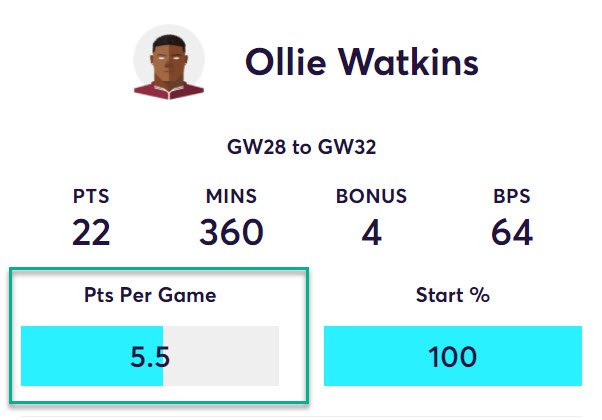 With attacking returns in each of the last three gameweeks (one goal, two assists), A. Traoré has averaged 6.7 points per game (PPG). As the Stats Sandbox feature shows, no teammate can better his 0.81 xG figure and his seven shots, five attempted assists and 12 touches in the opposition’s box are also team-leading tallies. Only W. José (five) can better his four SiB. Wolves have scored four goals over the last six gameweeks and are ranked 10th for SiB (42) and 12th for ‘big chances’ (10). Burnley’s defensive numbers offer plenty of reason for optimism, the Clarets have conceded 10 goals over the aforementioned period, only West Ham (11), Southampton (12) and Sheff. Utd (13) have been more porous. No team has allowed opponents more ‘big chances’ (18) than Burnley over that period. Our Fix Algorithm currently projects a point score of 4.3 for the winger.

Alexander-Arnold has amassed a goal, two assists and 12 bonus points in the last five gameweeks to average a score of 10.0 PPG. Across all positions, no player has provided as many as his 12 attempted assists in that time, while only Vardy can equal his four ‘big chances’ created. No defender has completed as many as his eight successful crosses. Liverpool have conceded just three goals over the last six gameweeks, the best defensive record in the league over that period. Only Chelsea (40), Man. City (29) and Leicester (23) have restricted opponents to fewer shots than Liverpool’s 44. Newcastle have scored eight goals over the last six gameweeks and are ranked sixth for shots conceded (72) and seventh for SoT conceded (25). Our Fix Algorithm currently projects a 50% chance of a Liverpool clean sheet and a point score of 5.7 for the right-back.