“ ... is getting better, training and tomorrow he will improve. He feels better. We will see (for Sunday).”

De Bruyne has been directly involved in five goals over his last six matches (one goal, four assists), where he has aaveraged 6.2 points per game (PPG), however, has emerged as a doubt ahead of gameweek 29 due to a shoulder injury. As the Stats Sandbox shows, during that period (gameweek 22-27), no player has attempted more assists than his 23 and only Salah (six) has created more big chances than his five. Amongst midfielders, only Martial (17), Armstrong (20), Son (22) and Salah (29) have fired more than his 16 goal attempts. Man. City have scored six goals in as many gameweeks and only Chelsea (102) and Liverpool (107) have taken more shots than their 100 over this period. Only Man. Utd (32), Everton (34) and Liverpool (39) have landed more shots on target (SoT) than their 30. Their first opponents Man. Utd have conceded just five goals over the last six gameweeks. Sheff. Utd, Man. City (both four) and Burnley (two) are the only teams to have conceded fewer. But, just nine teams have allowed more shots than their 76 and they have also conceded 10 ‘big chances’. Their second opponents Arsenal have also conceded five goals over the last six gameweeks and only ten teams have allowed more shots than their 73. Spurs (17), Southampton, Newcastle (both 18), West Ham (19) and Villa (22) are the only teams to have conceded more ‘big chances’ than their 22. Our Fix Algorithm projects a point score of 8.0 for the Belgian.

Aubameyang has averaged 6.0 PPG this season and that has risen to 6.4 across his last seven appearances, where he has netted six goals. The Arsenal talisman was afforded four ‘big chances’ in his last three outings, between gameweeks 25 and 27, with only Calvert-Lewin (five) earning more. In that time he has scored three goals from just nine shots, with no forward able to better his 33.3% goal conversion rate. He is the most transferred in player this week as per our Transfer Stats feature with over 300,000 managers bringing in the Gabonese international. Only Everton (12) and Liverpool (14) have scored more goals than Arsenal (10) over the last six gameweeks despite the Gunners taking the fewest shots (50) over that period. They have registered 11 ‘big chances’ and 19 SoT across those matches. Their first opponents West Ham have conceded 16 goals over the same period and no team has conceded more. They are also bottom for SoT conceded (38) and only Villa (22) have allowed opponents more ‘big chances’ than their 19. Man. City, however, promises to be a stiffer test. Only Burnley (two) have conceded fewer goals than the defending Champions’ four over the last six gameweeks and they have allowed the fewest SoT (10) and ‘big chances’ (four). Our Fix Algorithm projects a point score of 8.2 for Aubameyang. 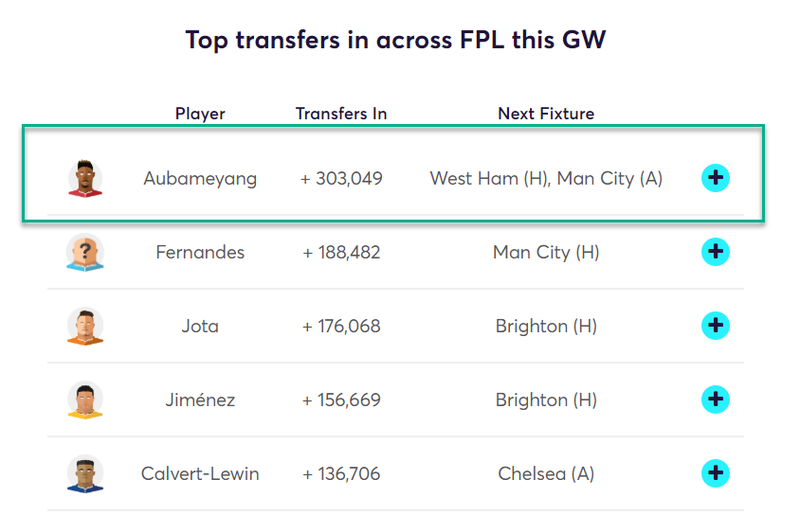 Mahrez has earned starts in six of Man. City’s last eight league matches, where he has amassed two goals and four assists, to average 7.0 points per 90 minutes. Only Calvert-Lewin, De Bruyne (each seven), Agüero and Salah (each eight) were directly involved in more goals during that period (gameweek 20-27), while only De Bruyne, Richarlison (each six) and Salah (seven) created more ‘big chances’ than his five. Mané (51), Zaha (52) and Salah (98) were the only midfielders to take more than his 46 touches in the opposition’s box. His ownership is still below 10% across all groups as shown in our FPL Statistics feature. Man. City top the attacking numbers for goals (68), shots in the box (SiB) (363), SoT (185) and ‘big chances’ (102) this season. Man. Utd have conceded 30, keeping just seven clean sheets. Only Sheff. Utd (91), Chelsea (85), Man. City (82) and Liverpool (80) have allowed opponents fewer SoT than the Red Devils’ 101. Arsenal have conceded 36 goals this season keeping just six clean sheets. They are ranked seventh-worst for both SiB conceded (245) and SoT conceded (133). Our Fix Algorithm projects a point score of 8.1 for Mahrez. 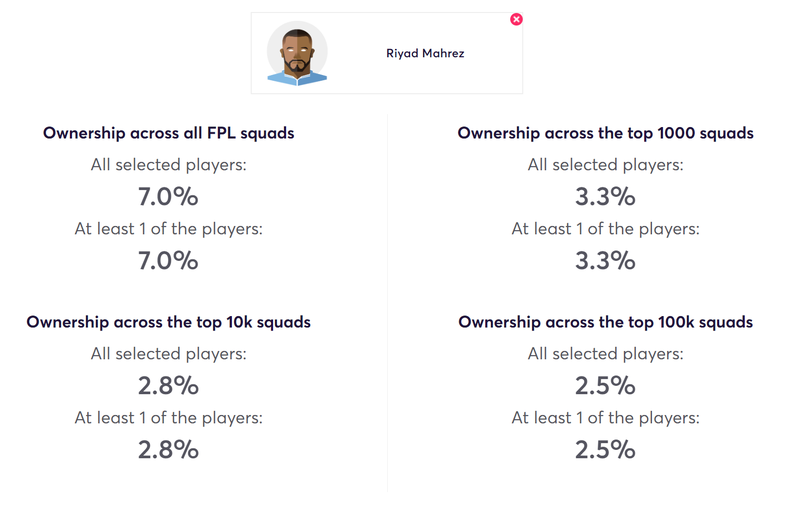 After scoring in the 3-2 win over Spurs last Sunday, Jiménez now has five goals in the last six gameweeks, and only Calvert-Lewin (39) has returned more than his 37 FPL points, amongst forwards. No player has been afforded as many as his nine ‘big chances’ in that time, while only Salah (25) can better his 22 SiB. Only four forwards have fired more than his eight SoT, while Haller, Long (each eight) and Firmino (12) are the only players to have attempted more assists than his six. Wolves have the best fixtures for the next six gameweeks as per our Fixture Analyzer so bringing in the Mexican is a great long term move. They have scored 10 goals over the last six gameweeks and only Everton (12) and Liverpool (14) have been more prolific. Man. City (65) and Liverpool (72) took more SiB than their 62. They are also ranked second for ‘big chances’ (21) and only Everton (23) have created more. Brighton have conceded 10 goals over the same period, keeping no clean sheets. Only eight teams have allowed opponents more ‘big chances’ than their 13 over this period. Our Fix Algorithm projects a point score of 5.7 for the Mexican.

Doherty has kept three clean sheets and been directly involved in three goals over the last four gameweeks (one goal, two assists), where he has averaged 8.5 PPG. The Wolves wing-back ranks top amongst defenders with four SoT during that period, while only Cahill can match his seven SiB. No defender has exceeded his 1.08 xG (expected goals), while only Robertson has taken as many as his 14 touches in the opposition’s box. Wolves have conceded just six goals in the last six gameweeks, keeping three clean sheets. Only Southampton (42), Sheff. Utd (41), Chelsea (32) and Man. City (18) have restricted opponents to fewer SiB than their 44. Man. City (four) are the only team to have restricted opponents to fewer ‘big chances’ than their seven. Brighton have scored just seven goals over the last six gameweeks with just seven teams scoring fewer. They are ranked 11th for ‘big chances’ created (13) and joint-sixth for SoT (28). Our Fix Algorithm projects a 50% chance of a Wolves clean sheet and a point score of 5.4 for Doherty.