Salah was directly involved in both Liverpool goals (one goal, one assist) as the league leaders earned a 2-0 win over West Ham on Wednesday night. The Egyptian now has three goals and two assists over the last five gameweeks, with no midfielder picking up more than his 42 Fantasy Premier League points. Only Agüero (10) has landed more than his nine shots on target (SoT), while only Deeney (4.24) has surpassed his 4.20 expected goals (xG). He is the most transferred in player this week with almost 350,000 new owners as per our Transfer Stats feature. Liverpool have scored 14 goals over the last six gameweeks, only Man. City (15) have been more prolific. The Merseyside club are also top for shots in the box (SiB) (74) and ‘big chances’ (23) over this period. Their South Coast opponents have found some defensive resilience of late, with just five goals conceded over the past six matches with only Watford (four) and Liverpool (one) conceding fewer. They are also ranked fourth-best for shots on target (SoT) conceded (19). However, a trip to Anfield is probably the most difficult fixture in the league at the moment and our Fix Algorithm projects a point score of 7.6 for Salah. 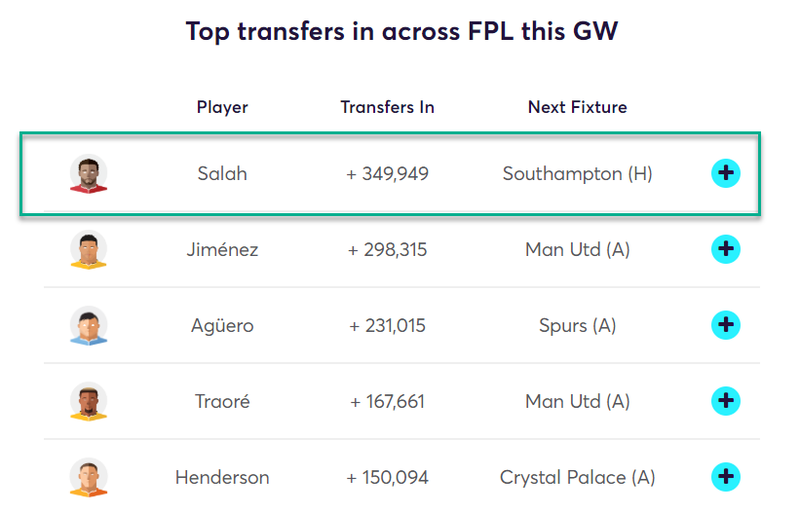 Agüero has scored in each of his last four league appearances, amassing seven goals and one assist in the last five Gameweeks. Despite playing just 284 minutes in that time, no player has been afforded as many as his seven ‘big chances’ and he also ranks first with a total of 10 SoT. Only Jiménez (3.63), Abraham (3.74) and Deeney (4.24) can better his 3.53 xG amongst forwards. As our FPL Statistics feature shows, his ownership is still quite low across the rank groups. No team has scored more than Man. City’s 15 goals over the last six gameweeks and the defending Champions are also top for shots (104) and second for ‘big chances’ (19) only to Liverpool (23). They trail only Liverpool (38) and Leicester (39) for SoT with 36. Spurs have kept just one clean sheet over the same period, shipping six goals. They conceded 10 ‘big chances’ with only 10 teams more generous. Our Fix Algorithm projects a point score of 3.9 for Agüero, which is slightly lower than expected because of possible rotation. 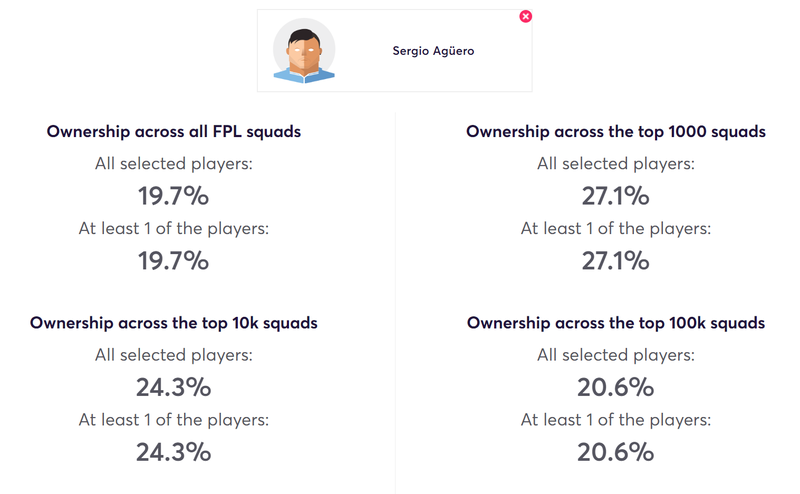 No midfielder has scored more goals than Martial (four) in the last six gameweeks, while only Calvert-Lewin (five) and Agüero (seven) have fared better across all positions. As the Stats Sandbox shows, a total of 12 SiB for the Frenchman during that period can only be bettered by Mané (15) and Salah (20), while no midfielder has fired more than his nine SoT (level with Salah). He trails only Mané for ‘big chances’ (five to seven). Man. United have scored 10 goals over the last six league matches with only Leicester (11), Liverpool (14) and Man. City (15) finding the back of the net more often. Only Chelsea (95), Liverpool (99) and Man. City (104) took more shots than their 92 and only Man. City (36), Liverpool (38) and Leicester (39) landed more SoT than their 35. Wolves have conceded 10 goals over the same number of matches, keeping no clean sheets. Only Newcastle, Villa, West Ham and Bournemouth (all 12) conceded more. The midlands outfit allowed opponents 21 SoT and nine ‘big chances’ over those matches. Our Fix Algorithm projects a point score of 4.9 for Martial.

Callum Wilson finally put an end to a 15 match dry spell with a goal against Brighton last Tuesday, as Bournemouth got back to winning ways. He averages 4.0 points per game at home according to our Fix Heatmaps feature and six of his nine FPL returns this season have come at the Vitality Stadium (four goals, two assists) and he ranks joint-fourth amongst forwards, priced below £8.5m, with a total of seven ‘big chances’ from 12 home matches. Only five players from that sample can better his 10 attempted assists. Although Bournemouth have scored just four goals in their last six matches, three of them were in the latest match against Brighton which might have been the kickstart they needed. Villa’s defensive statistics offer plenty of reason to be optimistic about the Cherries’ prospects. No team conceded more goals (12) or SiB (68) over the last six gameweeks and only West Ham (23) conceded more ‘big chances’ (21) than the Birmingham side. Our Fix Algorithm projects a point score of 4.6 for Wilson. 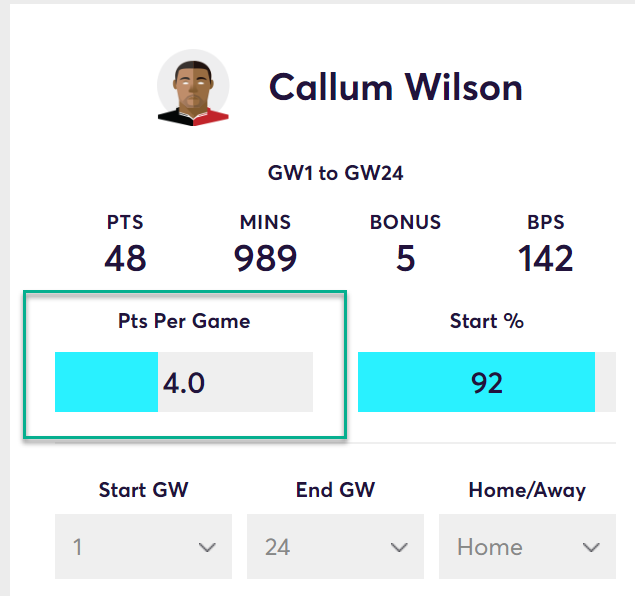 Lascelles made a return from injury to help his side to a 1-0 win over Chelsea in his last outing at St. James' Park, as Newcastle kept their sixth clean sheet of the season. In the six Gameweek period prior to injury (GW6-11), the 26-year-old returned 4.2 points per game, with two clean sheets and a goal. No Magpies defender made more clearances (29) or blocks (five) during that period, while only Schär (11) could improve on his seven interceptions. Newcastle may have conceded 12 goals over the last six matches but it is important to note that they have conceded the same number of goals in total over their 12 home games which indicates that they are very solid at St. James Park. Only Sheff. Utd (11) and Liverpool (nine) have conceded fewer goals on home turf. Only Sheff. Utd, Burnley, Everton (all five) and Watford (six) have kept more home clean sheets than the Magpies’ four. Norwich have scored only five goals over the last six gameweeks with only Bournemouth (four) and Sheff. Utd (three) scoring fewer. No team created fewer ‘big chances’ than their seven over this period. Our Fix Algorithm projects a 50% chance of a Newcastle clean sheet and a point score of 4.0 for their captain.