If Salah (10.2) continues in the same vein of form he has managed in the previous 23 gameweeks he is likely to score close to 300 points this season, rivalling that of former Liverpool forward Suarez from the 2013/14 season, when the Uruguayan managed 295 points. Liverpool’s top goal scorer scored his 18th Premier League goal against Man. City last weekend and he has now provided an incredible total of 26 Fantasy Premier League (FPL) involvements (18 goals, eight assists), which is more than any other player in the league. Only Kane (13.0) can match Salah’s 24 big chances this season and no player has managed more than the pair. Over the last 15 gameweeks Salah has failed to produce attacking returns just once (discounting his one game injury lay-off). Over his last four gameweeks no player has provided more than his six FPL involvements or had more than his six big chances, and his total of seven shots on target in that time can be beaten only by Ibe (4.8), Wilson (5.8), both with eight, and Kane with 12 amongst all players. Liverpool will play relegation strugglers Swansea away in gameweek 24 and our Fix algorithm predicts 2.37 goals for Liverpool in this one. Klopp’s men have now scored 16 goals in their last five league games, while the Swans have conceded 12 goals in their last four league encounters with “top six” opposition. Salah is predicted to score the most points via our Fix algorithm in gameweek 24, with 7.1. 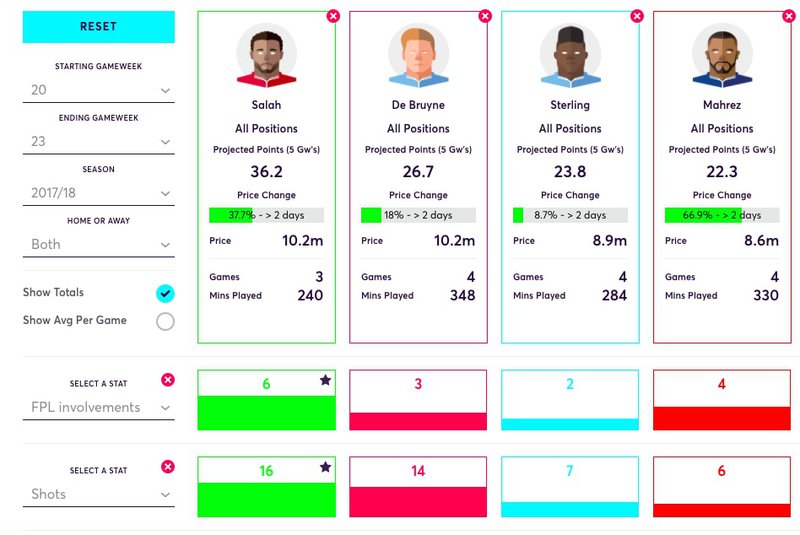 Agüero (11.7) looks to be a very good option over the next four gameweeks if it is to be believed that Jesus (10.0) will not be back for a few more weeks yet. With Man. City playing Newcastle, West Brom and Leicester at home over the next four, many will opt for City’s all time record goal scorer. The Man. City forward has been directly involved in 18 league goals this season, scoring 13 times and providing five assists. Only Sterling (8.9), Kane, with 21 each and Salah, with 26, have contributed more. Salah, with 70, and Kane, with 81, are the only players to have taken more shots from inside the box than Agüero’s 59. The same three players also dominate when it comes to big chances - Agüero has had 21 big chances and only Salah and Kane topple that with their 24. If we observe Agüero’s recent performances we see that he has provided three goals and two assists over the last five gameweeks and his seven shots on target during that period is only beaten by Wilson, with eight, and Kane, with 16, amongst forwards. Newcastle have the daunting task of travelling to the Etihad to face a Man. City team who will be out for revenge after losing their unbeaten record at the hands of Liverpool. The Magpies have conceded 10 goals in their last five games versus “top six” opposition and Fix our algorithm’s projection of 6.9 points looks justifiable and only 0.2 less than Salah.

Arnautovic (7.0) frustrated many West Ham fans with his lethargic displays during his early appearances for the Hammers often looking wasteful on the ball, but the Austrian has turned things around in recent weeks with some fine performances when leading the line. After recovering from a minor injury Arnautovic was able to return to the starting lineup against Huddersfield last weekend and managed to provide one goal and two assists in the 4-1 away win. He has now been directly involved with nine goals this season weighing in with eight of these in the last five gameweeks. Over his last four games, the West Ham midfielder has 10 attempted assists to his name. That compares favourably against the likes De Bruyne (10.2), who has pitched in with 12 over that time. Gameweek 24 sees West Ham host a Bournemouth side who have not won on the road in five games, conceding nine goals over that period. David Moyes’ team have improved significantly since the Scot took charge going unbeaten against Chelsea, Arsenal and Tottenham and scoring 16 goals in their last eight league games. Our Fix algorithm predicts a score of 4.9 points for Arnautovic. 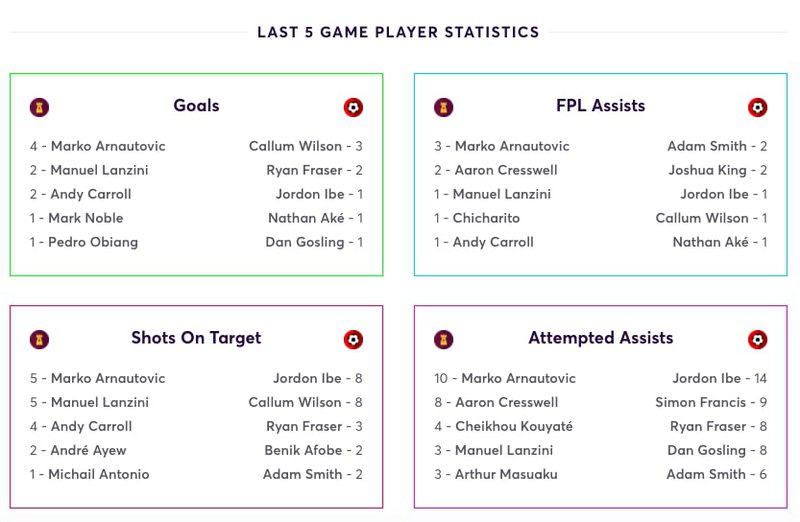 Otamendi (6.5) will take some beating at Man. City’s end of year team awards in the “Most Improved” category. Alongside Walker (6.6), the tough Argentinian has been an ever-present at the back for Man. City this season and has played a huge part in their clean sheet upturn. The defender has accumulated an impressive total of 10 clean sheets and four goals this season which ranks him third amongst defenders for overall points, behind only Azpilicueta (7.0) and Alonso (7.3). No defender has had more than Otamendi’s four big chances and only Alonso has taken more shots on target (with 18 to nine) and scored more goals (with six to four), amongst defenders. The Man. City defender is head and shoulders above his teammates producing more clearances per game, with 3.6, interceptions, with 1.7, and won more aerial duels, with 3.0. Man. City will be out for blood in gameweek 24 after Liverpool doused their hopes of becoming the first team to go unbeaten over the season since Arsenal in 2003/04. With Man. City likely to be on the attack for much of the game the probability of a clean sheet heightens – Newcastle are the least likely club to score in gameweek 24 according to our Fix algorithm in 20th with a 39% chance, Brighton are 19th with a 52% chance to put that into context. Otamendi is projected to score 5.8 points. 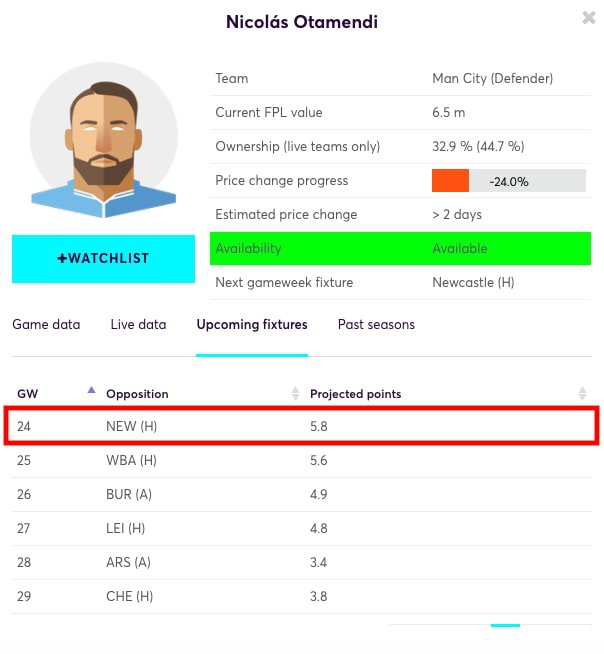 Vardy (8.5), comes into our top five as the mid-priced selection this week given the appetising nature of his home fixture against Watford. The Hornets have been leakier than the Panama papers over the last 10 gameweeks and with in-form attackers at Leicester the goal conceding rot does not look likely to stop this week for Watford. With nine goals and two assists so far this season, Vardy, is currently the fifth highest scoring forward in FPL, behind only Lukaku (11.3), Agüero, Firmino (9.2) and Kane. In his last four games the Leicester City forward has found the back of the net on two occasions in challenging fixtures against Man. Utd and Liverpool. His six shots from inside the box, during the same timeframe, is more than Firmino, who has five,  Lukaku, who has four, and Vardy has also been involved in more big chances than the pair over that period, with three big chances compared to Firmino’s one and Lukaku’s two. Watford travel to the King Power stadium for gameweek 24 as touched upon above. Leicester have scored eight goals in their last five home matches, including two goals against a tough Tottenham side and the Foxes are predicted to score 2.24 goals via our Fix algorithm, with Vardy getting a projection of 6.0 points. 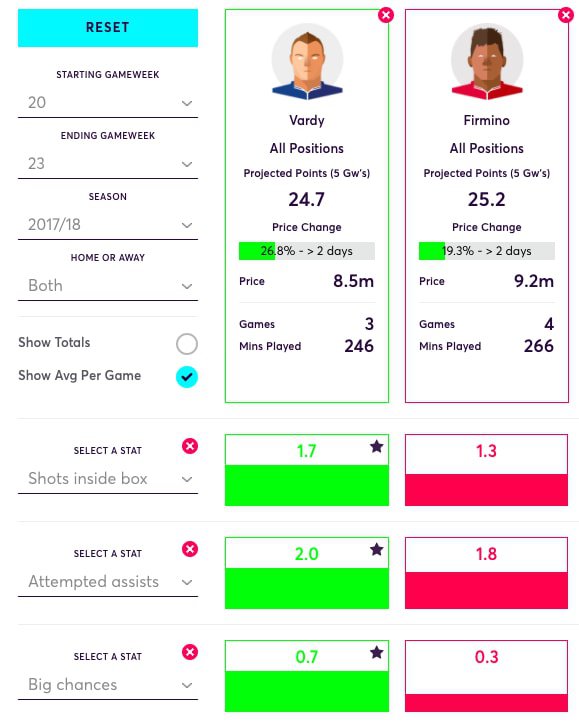