As the deadline looms closer, it is time to decide what to do with our precious free transfer(s). Aside from playing chips or selecting a captain, our transfers are the single most important aspect of our FPL campaign, and the importance of getting it right cannot be overstated.

Caveat: This article was written on the morning of Friday 11th November, before the press conferences.

With some of the best attacking statistics (per 90 minutes), is Darwin a good bet against a manager-less Southampton? pic.twitter.com/VVxc7EUXRe

There’s a reason everybody keeps talking about Darwin Núñez (£8.9m). As one of Liverpool’s most expensive signings, the weight of expectation of Núñez is huge. The general feeling is that Liverpool have landed themselves a ‘diamond in the rough’. Extremely pacey and offering intense goal threat, Núñez adds a dimension to Liverpool’s attack, which is difficult to deal with.

Early FPL adopters of Núñez may feel frustrated with his return rate and this is, in part, because he is not always first choice, and has only completed the full 90 minutes twice all season, not featuring at all against Nottingham Forest, a great fixture (on paper, at least).

But his underlying statistics per 90 minutes are amongst the best in the Premier League, beating highly owned Gabriel Jesus (£8.0m) against nearly every attacking metric – this is covered in more detail in our GW16: Differential Focus article. 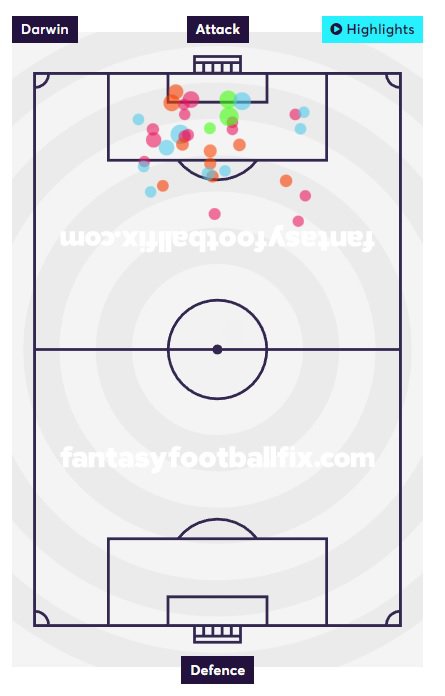 Of Núñez's 36 shots this season, 27 have come from inside the box - click here for Opta Player Heatmaps

As Gameweek 16 is all about a ‘one-week punt’ – with unlimited transfers allowing a complete team reset during the winter World Cup – we need only focus on the next fixture ahead of us. Liverpool plays Southampton who are ranked 16th in the table for shots in the box conceded (127); this could play right into Núñez's hands who, according to Opta Player Heatmaps, has taken more shots (6.24), and shots in the box, per 90 minutes (4.68) than any other player.