Salah was in the squad for Liverpool’s visit to Palace but was an unused substitute as the Reds ran out 2-1 winners. Klopp has allayed concerns about his fitness, saying that he could have used him if needed and that he is available for selection for their next matches. Despite missing two of their last five matches, the Match Preview feature shows that he is second for goals (two) only to Mane in the Liverpool squad and still beats the Senegalese for xG (expected goals) 1.9 to 1.8. He also leads the way for shots on target (SoT) with eight, three ahead of Mane. Only De Bruyne (56) has notched more Fantasy Premier League (FPL) points than Salah’s 53 in home matches. Liverpool have scored 17 goals in their six home matches this season, only Man. City (21) have scored more. They are top for SoT in home matches with 47. Brighton have conceded 11 goals in their six away matches this season, keeping just two clean sheets. Only Villa have a higher xGC (expected goals conceded) (13.87) than Brighton’s 13.84 on the road this season. Our Fix Algorithm projects a point score of 7.0 for Salah. 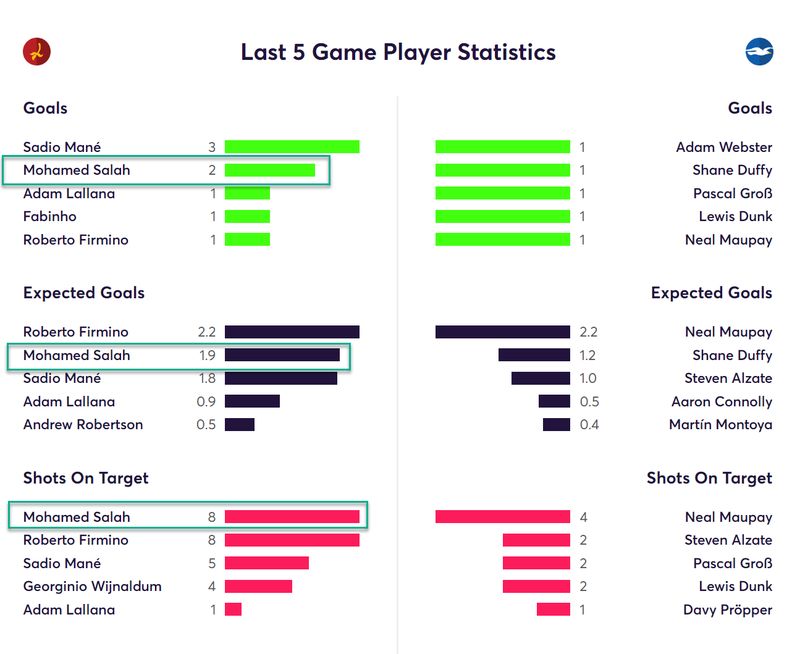 Vardy is in the form of his life under Rodgers and a visit of a beleaguered Everton side to the King Power Stadium offers another opportunity to captain the Foxes’ talisman. No player has notched more FPL points than his 104 or scored more goals than his 12. He also leads the league for SoT (20) and has four assists as well. As the Stats Sandbox shows, only Abraham (16) has been afforded more ‘big chances’ than his 15. Only Man. City (37) have scored more goals than Leicester’s 31 this season and the Foxes are fifth for SoT with 67. Everton have conceded 20 goals this season, only West Ham (23), Watford (26), Norwich (28) and Southampton (31) have conceded more. They have kept just three clean sheets and allowed opponents 112 shots. Our Fix Algorithm projects a point score of 6.3 for Vardy.

Kane continued his positive start to life under Mourinho with two goals in the Champions League to add to his goal against West Ham in gameweek 13 and at under 20% ownership, the Englishman is an explosive differential captain option this week. As the Stats Sandbox shows, he remains Spurs’ leading scorer with seven goals this season, he trails only Son for shots (34 to 32) and SoT (14 to 12). However, he has been afforded seven ‘big chances’ compared to the Korean’s four and beats him for xG 4.52 to 2.74. Only Chelsea (28), Liverpool (30), Leicester (31) and Man. City (37) have scored more goals than Spurs’ 21 this season and they are ninth for shots with 164. Bournemouth have conceded 17 goals this season, keeping just three clean sheets. Only Arsenal (219), Norwich (227) and Villa (240) have conceded more shots than Bournemouth’s 199. Down 0.2 from his start price of 11m, he is a popular transfer this week as per our Transfer Stats feature and our Fix Algorithm projects a point score of 6.1 for the Englishman. 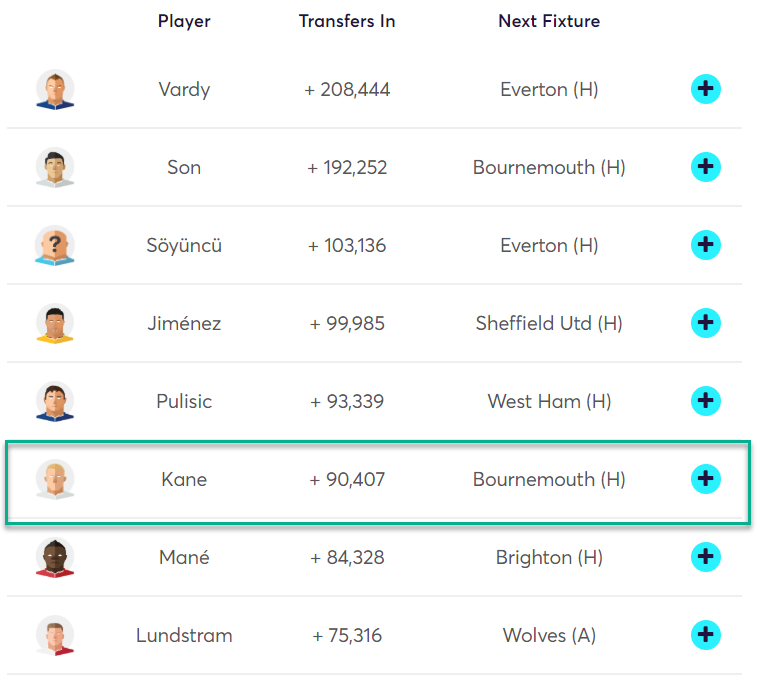