Vardy continued his scoring run with a late goal against Palace in gameweek 11 and the Foxes’ striker is the standout pick for captaincy this week with Liverpool and Man. City players not featuring in the captains blog for the first time this season. The Englishman is currently the top-scoring player in Fantasy Premier League (FPL) with 70 points, As a result of leading the way with 10 goals. Only Pukki (16), Salah (17) and Abraham (19) have landed more shots on target (SoT) this season than Vardy’s 14 and he is also fifth for ‘big chances’ with 10. Man. City (34) are the only team to have scored more goals than Leicester’s 27 this season and they are ranked fifth for shots with 151. Arsenal have conceded seven goals in their five away games, keeping just one clean sheet so far. They have allowed opponents 89 shots on the road, the sixth-worst in the league. Our Fix Algorithm predicts a point score of 6.1 for Vardy.

The most owned player in FPL, Abraham continued his good form with a goal and assist against Watford in gameweek 11 and is a great candidate for the armband for the visit of Palace to Stamford Bridge. As the Stats Sandbox feature shows, no player has landed more SoT across the league than Abraham’s 19 and only Vardy (10) has scored more goals than his nine. He also leads the league for ‘big chances’ with 14. The young, emerging forward has also attempted 11 assists with just eight forwards creating more. Only Liverpool (187) and Man. City (240) have taken more shots than Chelsea’s 181 this season and the Blues are second only to the defending champions for ‘big chances’ with 36. Palace have conceded nine goals on their travels, keeping zero clean sheets. They allowed opponents 49 shots in the box (SiB), only eight teams fared worse. Our Fix Algorithm projects a point score of 5.8 for Abraham. 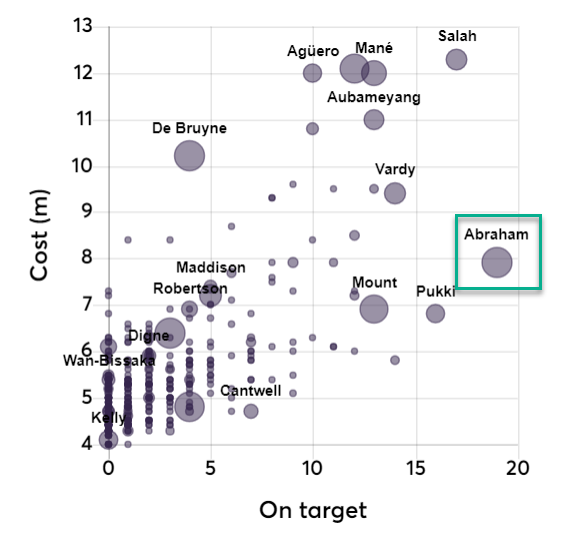 After a stellar 2018/19 campaign, Jimenez started this season slowly with just 24 points in his first seven matches but has racked up 30 in his last four. As the interactive shot map shows, he took eight shots against Arsenal in gameweek 11. In fact, over the last four gameweeks only Jesus (14) and Maupay (19) have attempted more shots amongst forwards than the Mexican’s 13 and only Vardy (five) has scored more goals than his two. He has also created six chances, and only Rashford and Firmino (both seven) have created more. His total of three ‘big chances’ created is highest amongst forwards. Wolves have scored 14 goals this season, landing 37 SoT and creating 21 ‘big chances’. Villa are yet to keep a clean sheet away from home this season and have conceded 11 goals in five matches. They have allowed opponents more shots (121) than any other team in the league. Our Fix Algorithm projects a point score of 4.1 for the Mexican.