Newcastle forward Isak is expected to miss the Fulham game due to injury sustained during international break and in this blog the best replacement options are compared using the Fix Comparison Matrix. Mitrović has been left out as his numbers have been discussed in detail in previous blogs and the aim of this piece is to identify if there are any alternative options that may be going under the radar. 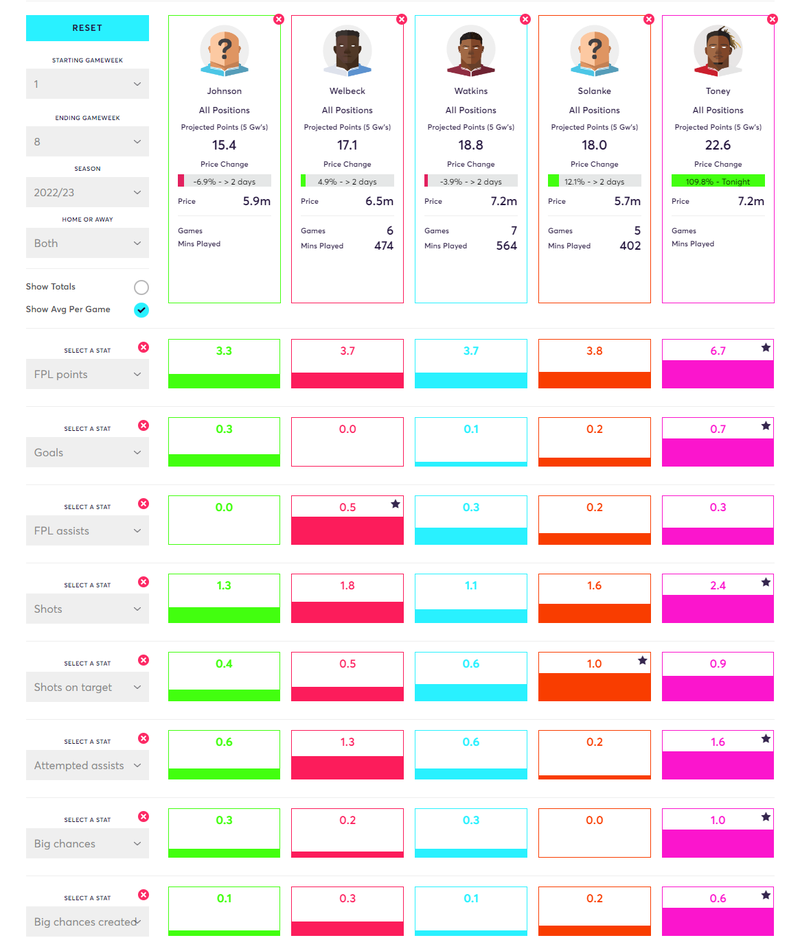 A look at the Fixture Analyser sees Forest ranked 17th with the next two fixtures against Leicester and Villa appealing but a daunting run after which includes games against Liverpool and Arsenal.

Welbeck saw consistent minutes under Potter and it remains to be seen how Brighton's new manager De Zerbi utilises the 31-year-old. He is top of the comparison for assists per game (0.5) and second for both shots (1.8) and attempted assists (1.3). De Zerbi is known to be an attacking manager, but Brighton have a tough run of fixtures over the next six with games against Liverpool, Spurs, Man. City and Chelsea

Watkins has only found the net once this season and is bottom of the comparison for shots per game (1.1). However, the chances he is getting are of decent quality as shown by his 0.3 'big chances' per game. His 0.6 SoT per game is uninspiring though, and the 0.6 attempted assists per game is also meagre. As the below image shows, Villa are ranked third on our Fixture Analyser for the next four and fixtures often breed form so Watkins could be worth consideration.

Bournemouth are ranked second on the Fixture Analyser image above and Solanke was prolific in the Championship for the Cherries with 29 goals. The South coast side have had difficult fixtures to start the season but Solanke still tops the comparison for SoT per game (1.0). It is worrying that he is yet to be afforded a 'big chance' and as the Stats Sandbox image below shows, Bournemouth are bottom of the league for both 'big chances' (three) and 'Expected Goals' (xG) (3.35).

Toney is the highest owned player in the comparison with 33% ownership across the top 1000 managers, as per our FPL Statistics feature. The Brentford man is top for FPL points per game (6.7), goals (0.7), shots (2.4), attempted assists (1.6), 'big chances' (1.0) and 'big chances' created (0.6). As the below image shows, Brentford are ranked 12th on our Fixture Analyser and the next four are a mixed bag with games against Bournemouth and Brighton appealing but difficult games against Newcastle and Chelsea.

A look at the Stats Sandbox shows that the Bees are second for 'big chances' (22) this season and third for 'Expected Goals' (11.95) which is encouraging for Toney backers.

Based on the above analysis, Toney looks to be the best replacement for Isak, but Solanke offers an intriguing differential option at a significantly lower price.