B. Fernandes has directly contributed to five goals in the last four gameweeks (three goals, two assists), to earn an average of 8.3 points per game (PPG). Only Kane has picked up more Fantasy Premier League (FPL) points over that spell (36 to 33), while only Salah and Bamford (each eight) have landed more shots on target (SoT) than the Portuguese star (seven). He ranks joint-third with a total of 12 attempted assists and only trails behind Harrison (13) and Barkley (15). He has already risen in price this gameweek and you can monitor further price movements using our Price Predictor feature. Man. Utd have scored seven goals over the last four gameweeks, only Chelsea (10) and Southampton (11) have scored more. The Red Devils have taken more shots (63) than any other side in the division and only Chelsea (24) have landed more SoT than their 23 in the same period. West Brom have conceded four goals in as many matches, keeping just one clean sheet. Only Leeds, Everton (both 12) and Sheff. Utd have conceded more ‘big chances’ than their eight. Our Fix Algorithm currently projects a point score of 7.8 for B. Fernandes.

After a slow start to life in the Premier League, Werner now has four goals and one assist in the last four gameweeks, where he has averaged 8.0 PPG as per our Fix Heatmaps feature. Only Vardy (six) and Bamford (seven) have been afforded more than his four ‘big chances’ over that period, amongst FPL forwards. The German has taken 24 touches in the opposition’s box, behind only Watkins (25) and Bamford (26). Chelsea have scored 10 goals over the last four gameweeks, only Southampton (11) have been more prolific. The Blues have landed more SoT (24) than any other side in the division. Newcastle have conceded eight goals in the last four gameweeks, keeping no clean sheets. Only Leeds and Everton (both nine) have conceded more goals. No team has allowed more shots than the Magpies’ 74. Our Fix Algorithm currently projects a point score of 4.5 for the German. 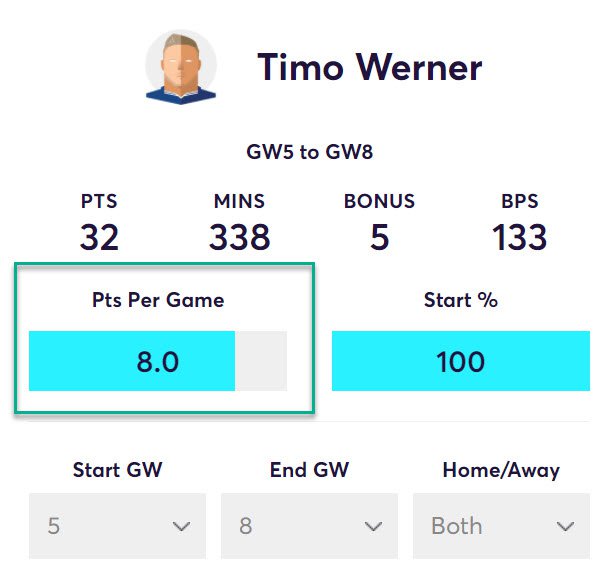 Grealish continued his impressive form to set up Watkins against Arsenal before the international break, amassing 6.3 PPG over the last four gameweeks. No FPL midfielder has created more ‘big chances’ than his four over that period other than Chelsea's Ziyech who is the only player to match that output. Salah is the only player that can equal the Villa talisman for shots in the box (SiB) (11), while only Mané and Salah (each four) have been afforded more ‘big chances’ than his three. He is the third-most transferred in player this week as per our Transfer Stats feature. Villa have scored seven goals over the past four gameweeks and only Chelsea (10) and Southampton (11) have found the back of the net with more regularity. Their total of 40 SiB over that period is only bettered by Leeds (44). Liverpool (12) are the only team to have created more ‘big chances’ than the Villans' 10. Brighton have conceded four goals over as many matches, keeping just one clean sheet. They have allowed opponents eight SoT and four ‘big chances’ over those matches. Our Fix Algorithm currently projects a point score of 4.3 for Grealish. 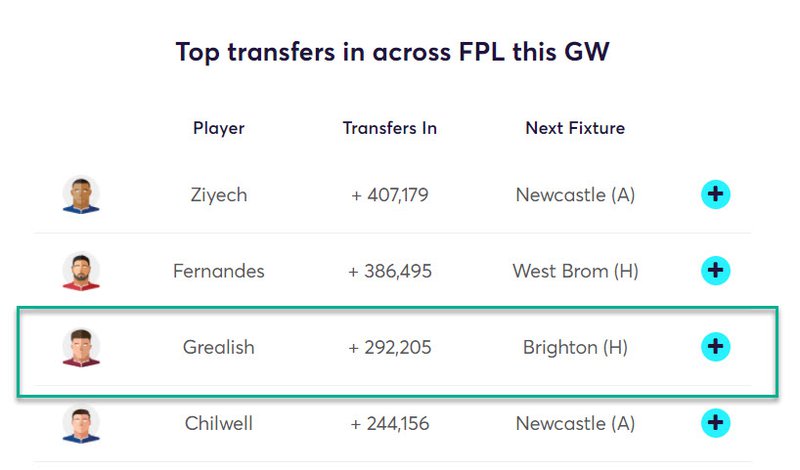 After playing a direct hand in Everton’s consolation goal against Man. Utd, Calvert-Lewin has picked up an average of 5.0 PPG in the last four gameweeks. As the Stats Sandbox shows, amongst FPL forwards, only Adams, Vardy (each seven) and Bamford (eight) have landed more than his five SoT during that time. Meanwhile, only Kane, Mitrović (each 11) and Bamford (16) can better the Englishman’s nine SiB. Everton have scored four goals over the last four matches, creating four ‘big chances’ and landing 12 SoT. Fulham have conceded four goals over as many matches, keeping just one clean sheet. Only Newcastle (26) and Sheff. Utd (28) have allowed opponents more SoT than Fulham's 24. Our Fix Algorithm currently projects a point score of 5.1 for Calvert-Lewin.

With a goal and a clean sheet in the last four gameweeks, Maguire has averaged 4.5 PPG. Always a threat from set-pieces, nine shots in total and seven SiB rank the centre-back top amongst FPL defenders over this period. Only Rashford (eight) has taken more SiB amongst Man Utd teammates. Man. Utd have conceded just three goals over the last four matches and only Leicester, Wolves and Man. City (all two) have shipped fewer. No team has conceded fewer SoT (eight) or ‘big chances’ (two) than the Red Devils over those four matches. West Brom have scored just one goal over the same period and only Burnley (zero) have fared worse. No team has created fewer ‘big chances’ than the Baggies (one) and only Arsenal, Brighton (both 11) and Burnley (eight) have landed fewer SoT than their 12. Our Fix Algorithm currently projects a 50% chance of a Man. Utd clean sheet and a point score of 5.0 for Maguire.