After suffering defeat to Brighton before the international break, Spurs will be looking to get back to winning ways against one of the most porous defences in the league. Kane has been directly involved in four goals during the last five gameweeks (three goals, one assist), returning a respectable average of 5.8 points per game (PPG). As the Stats Sandbox shows, a total of seven shots on target (SoT) over that run sees the England captain rank level with Mané and Aubameyang, with only Mahrez, Wesley, C. Wilson (each nine) and Abraham (13) faring better. Spurs have scored nine goals over the same period and only Leicester (11), Liverpool (11), Chelsea (14) and Man. City (17) have managed more. They are also ranked fifth for SoT with 25 and only Liverpool (30), Chelsea (30), Villa (31) and Man. City (36) have tested the opposition keeper more regularly. The Hornets have conceded 13 goals over their last five games and only Sheff. Utd (16) and Norwich (17) have allowed opponents more ‘big chances’ than their 15. Our Fix Algorithm backs Kane as the standout pick this week with a point score of 7.4.

C. Wilson has averaged 6.0 PPG across the opening eight gameweeks, failing to produce an attacking return for the first time this season when Bournemouth suffered defeat to Arsenal. His total of four goals scored in the last four gameweeks ranks joint-first in the league, alongside Abraham and Aubameyang. Only Agüero and Abraham (each seven) have racked up more than his six ‘big chances’ in that time and the Chelsea forward is the only player to better his eight SoT with 10. Agüero (24.2), Abraham (25.3) and Wesley (26.3) are the only forwards with more than Wilson’s 23.6 expected Fantasy Premier League (FPL) points (xFPL) during that period. As the below image shows, Bournemouth are ranked top of the Fix Fixture Analyser for the next four gameweeks which makes C. Wilson a great short term option. The Cherries have scored eight goals in their last four matches and only Villa (12), Liverpool (16), Chelsea (18) and Man. City (19) have created more ‘big chances’ than their 11. Norwich have struggled with injuries at the back and only Watford (12) have conceded more goals than their 11 over the last four gameweeks. They are also ranked bottom for SoT conceded (29) and ‘big chances’ allowed (14). Our Fix Algorithm backs C. Wilson to get attacking returns with a point score of 6.8.

Man. City failed to score for the first time this season when they suffered defeat to Wolves before the international break. A trip to Crystal Palace awaits the Champions in gameweek nine, with Sterling boasting an impressive away record so far. Only Abraham (six) has scored more than his five goals, while no player has had more ‘big chances’ than Sterling’s seven. The Englishman also ranks top with tallies of 16 total shots and 14 shots inside the box (SiB) during away matches, while only Wesley (nine) has fired more than his eight SoT. As the FPL Statistics feature shows, Sterling is still the fifth-highest owned player across the game. Man. City have scored 13 goals on their travels this season, more than any other side and also lead the way for ‘big chances’ (17) and SoT (31). Palace have conceded six goals over the last four gameweeks with only five sides faring worse. They have allowed opponents 16 SoT and six ‘big chances’ over those matches. Our Fix Algorithm predicts a point score of 5.4 for Sterling. 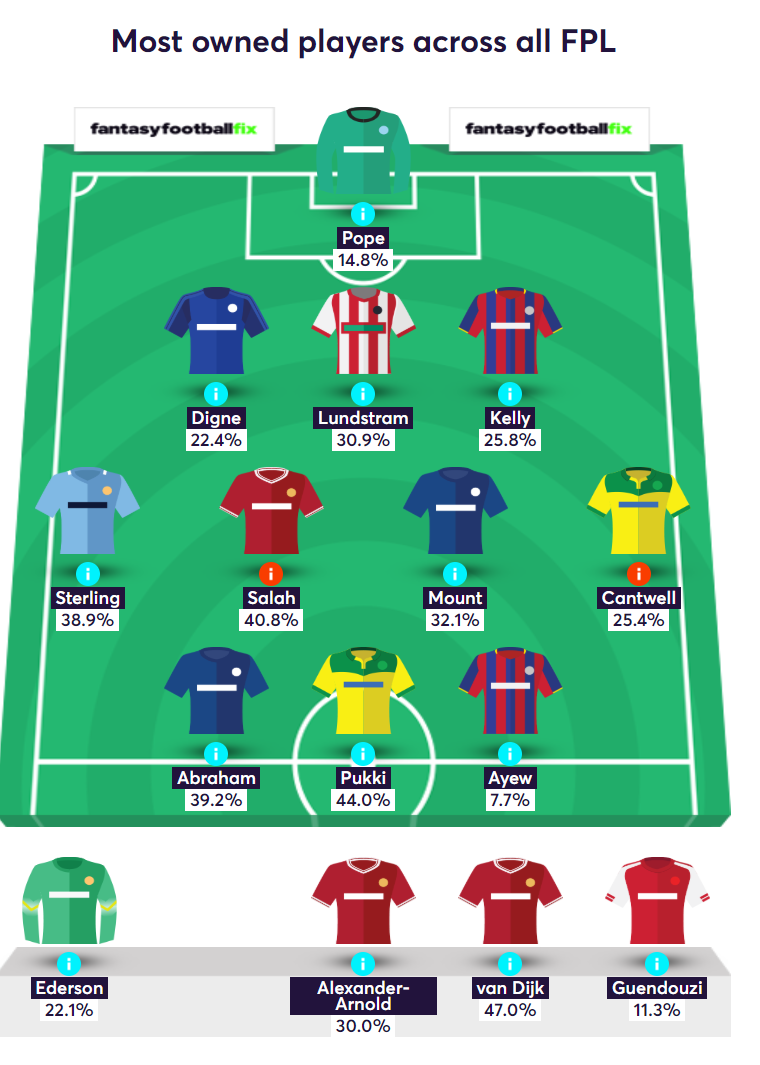 Mount comes into the game with Newcastle in good form, having scored and assisted across his last two league outings, against Southampton and Brighton. As the Stats Sandbox shows, amongst midfielders, only Mané (five) has had more than his four ‘big chances’ during the last four gameweeks, while only B. Silva (1.7), Salah (2.5) and Mané (2.9) can better his 1.4 expected goals (xG). The 20-year-old has amassed nine attempted assists during that period, while only Firmino (five) and De Bruyne (four) have created more ‘big chances’ than his three. Only Man. City (13) have scored more than Chelsea’s 12 goals over the last four gameweeks and they only trail the defending Champions for both shots (65) and ‘big chances’ (18). Newcastle have conceded eight goals over the same period while only Southampton (nine), Everton (nine), Norwich (11) and Watford (12) have fared worse. Meanwhile, Villa (65), Bournemouth (68), Arsenal (71) and Norwich (75) are the only teams to have allowed opponents more shots than their 62. Our Fix Algorithm predicts a point score of 4.1 for Mount.

Pereira has found the back of the net in each of his last two home matches, while conceding a total of just one goal, during wins over Spurs and Newcastle. He’s taken a total of four shots in four home matches this season, scoring from both of his SoT. All five of his attempted assists have come at the King Power Stadium and only Rose, Zinchenko, Chilwell and Robertson have completed more final third passes during home matches, amongst defenders. Leicester have conceded only five goals in their last four matches and only Liverpool (three), Burnley (three), Brighton (three) and Sheff. Utd (two) have fared better. The Foxes have only allowed 17 SoT and nine ‘big chances’, which is impressive considering they played Liverpool, Spurs and Man. Utd. in three of those games. Burnley have scored five goals on the road this season and landed just 12 SoT. Our Fix Algorithm predicts a 40% chance of a Leicester clean sheet and a point score of 4.9 for Pereira.