Kane has been Spurs' standout performer this season, as the below image from our Match Stats feature shows the England international is top amongst Spurs players over the last five matches for goals (four), 'Expected Goals' (3.1), shots on target (SoT) (nine) and attempted assists (eight). Spurs are ranked fifth for goals scored (12), while only Man. City (37) and Liverpool (38) have landed more SoT than their 36. The Foxes have have conceded a whopping 16 goals this season and are yet to register a clean sheet. Rodgers has said in his press conference that he intends to play on the front foot at White Hart Lane and only Bournemouth (18) have shipped more goals than the Foxes, while only Palace (20) have allowed opponents more 'big chances' than their 18. Our Fix Algorithm currently projects a point score of 6.2 for Kane. 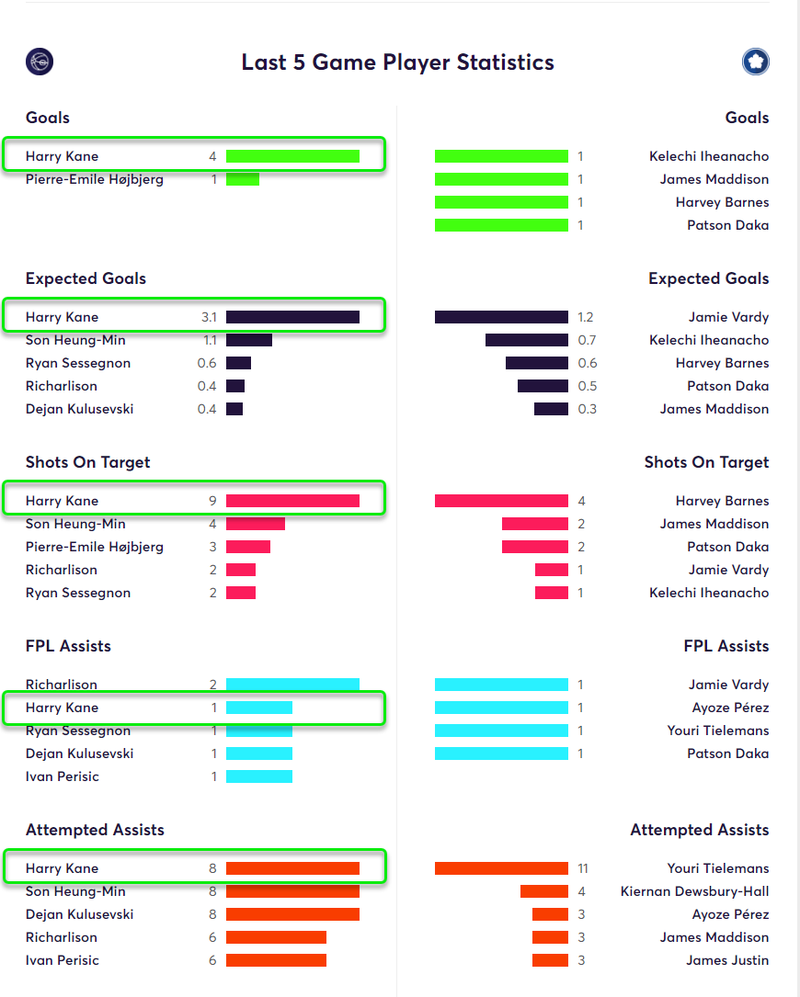 Haaland continued his fine form with a goal in the Champions League midweek and the Norwegian international is the top scorer in the league by some distance with 10 goals. As the Stats Sandbox image below shows, his underlying numbers are monstrous as well. He is top amongst all players for shots in the box (SiB) (24), SoT (15) and 'big chances' (14). Man. City are top for both goals scored (20) and 'big chances' (28), while only Liverpool (38) have landed more SoT than their 37. Man. City’s hosts Wolves have been frugal with just four goals conceded but The Midlands side are ranked eighth for shots conceded (70) and seventh for SoT conceded (20), so they have been a bit fortunate. Our Fix Algorithm currently projects a point score of 5.1 for Haaland.

Mitrović has found the back of the net six times in as many games with only Haaland (10) being more lethal. The 28-year-old is top amongst forwards for shots (27) and SoT (15), while only Haaland (14) has been afforded more 'big chances' than his eight. As the below image from our Transfer Analytics shows, he is a popular transfer target this week with over 300,000 managers bringing him in at the time of writing. Fulham are ranked eighth for goals scored (nine) and 11th for 'big chances' (11). Forest's defensive numbers offer plenty of reason to consider the Serbian international for the armband, they have conceded 14 goals so far with only Leicester (16) and Bournemouth (18) faring worse. No team has allowed opponents more SoT (39) while only Fulham (17), Leicester (18) and Palace (20) have been more obliging in providing 'big chances' (16). Our Fix Algorithm currently projects a point score of 5.0 for Mitrović. 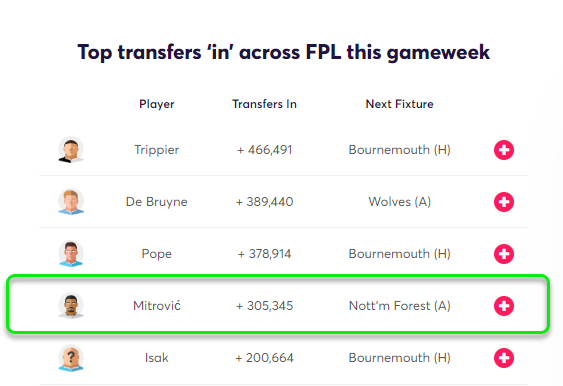