After converting from the penalty spot against Brighton last Sunday, Kane has now scored or assisted in each of the last six gameweeks, averaging 11.5 points per game (PPG). The England captain has landed a league-high total of 13 shots on target (SoT) in that time, while only Calvert-Lewin (nine) has been afforded more than his eight ‘big chances’. No Fantasy Premier League (FPL) forward has recorded as many as his 12 attempted assists, while his total of seven ‘big chances’ created remains top amongst all players. He is the most owned player in the top 1000 with 92.3% ownership as per our FPL Statistics feature. Spurs have scored 18 goals over the last six gameweeks, more than any other side. They are also top for ‘big chances’ (22) and only Liverpool (39) landed more shots on target (SoT) than their 38. West Brom have conceded 13 goals over the last six gameweeks, the worst defensive record in the league. Only Newcastle (40) have allowed opponents more SoT than their 35 while only Leeds, Liverpool, Fulham (all 14) and Man. Utd (15) have conceded more ‘big chances’ than their 13. Our Fix Algorithm currently projects a point score of 6.9 for Kane. 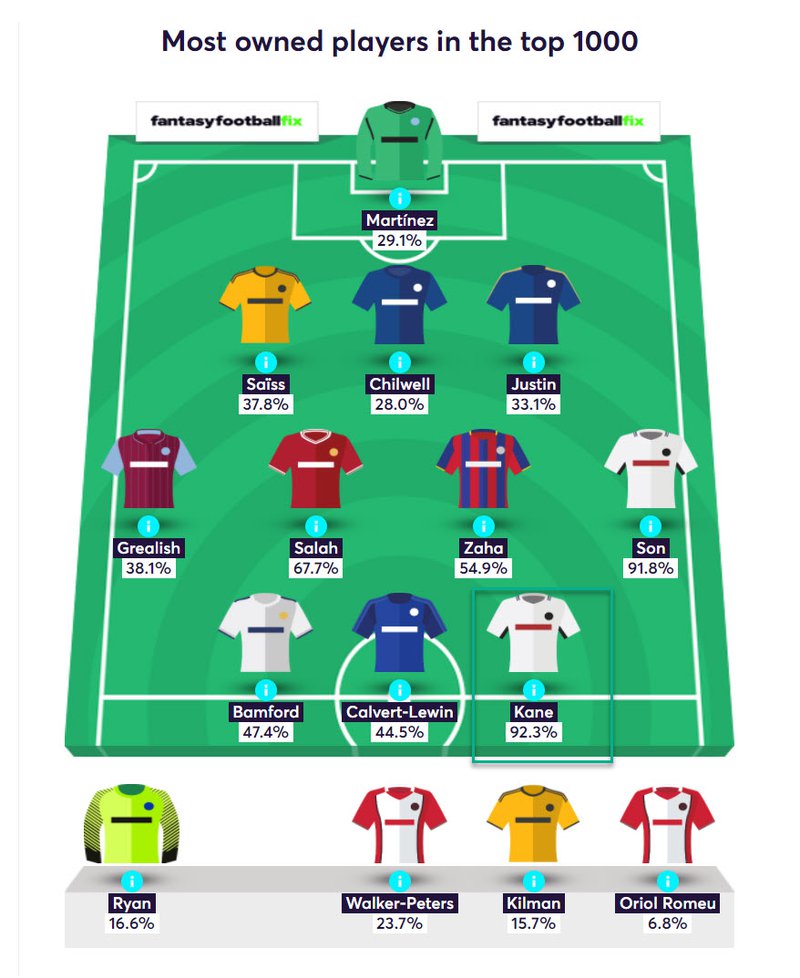 De Bruyne made his first league start since gameweek four against Sheff. Utd last weekend and picked up a slightly generous assist for Walker’s long-range strike. As the Stats Sandbox shows, despite missing the best part of two matches, his total of 18 attempted assists this season is on par with Salah and only B. Fernandes (19) has managed more. No Man. City teammate has fired more than his 15 shots or landed more than his six on target. Man. City have scored nine goals over the last six gameweeks and only Liverpool (101) have taken more shots than their 96. Only Leeds (37), Spurs (38) and Liverpool (39) have landed more SoT than their 35. Liverpool have suprisingly conceded 12 goals over the last six gameweeks and only West Brom and Man. Utd (both 13) have been more porous. Meanwhile, only Man. Utd (15) have allowed opponents more ‘big chances’ than their 14. Our Fix Algorithm currently projects a point score of 6.1 for the Belgian.

After a frustrating start to the season, Adams has now produced returns in four of the last five gameweeks averaging 6.2 PPG. Amongst forwards priced under £8.5m, only Watkins (32) and Wilson (43) have amassed more than his 31 FPL points over this period. The 24-year-old has created two ‘big chances’, on par with Mitrović and Agüero, with only Kane (four) faring better amongst all forwards. He is rated 100% to start as per our Predicted Lineups feature, and with Ings ruled out for between four and six weeks, Adams will be called upon more than usual for goal involvements. Southampton have scored 14 goals over the last six gameweeks and only Villa (15) and Spurs (18) have been more prolific. They have landed 31 SoT and created eight ‘big chances’ over those matches. Newcastle have conceded 11 goals over the last six gameweeks, keeping no clean sheets. They have allowed opponents 102 shots and 40 SoT, more than any other side. Our Fix Algorithm currently projects a point score of 5.2 for Adams. 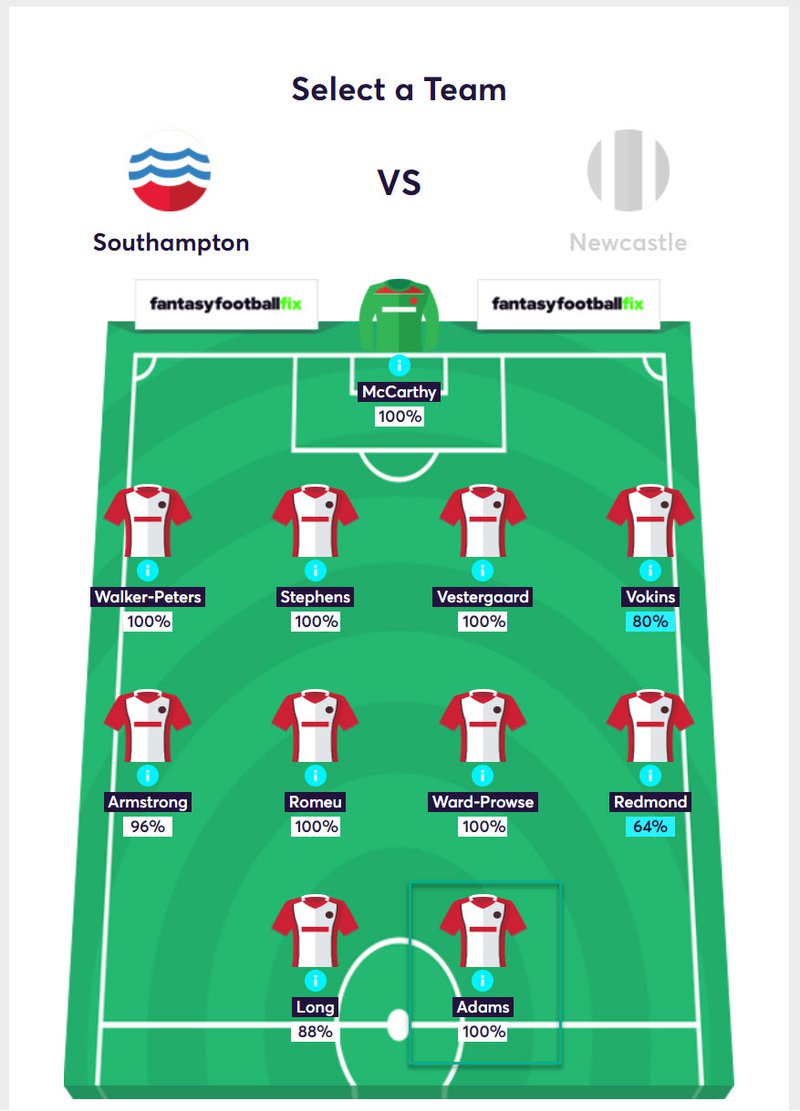 The last five gameweeks have seen Fornals contribute two goals and three assists, to earn 7.0 PPG as per our Fix Heatmaps feature. The Spaniard ranks joint-fifth amongst midfielders with a total of nine shots in the box (SiB) over this period, which is only behind Mané, Zaha (each 10), Grealish (13) and Salah (15). Amongst teammates, only Antonio (six) has landed more than his 5 SoT, while only Cresswell (11) can better his five attempted assists. West Ham have scored 13 goals over the last six gameweeks and only Leicester, Everton, Southampton (all 14), Villa (15) and Spurs (18) have scored more. They have landed 24 SoT and fashioned 10 ‘big chances’ over those matches. Fulham have conceded 11 goals over the last six gameweeks and only Liverpool, Burnley (both 12), Man. Utd and West Brom (both 13) have conceded more. They have conceded 14 ‘big chances’ over those matches with only Man. Utd (15) faring worse. Our Fix Algorithm currently projects a point score of 4.0 for Fornals. 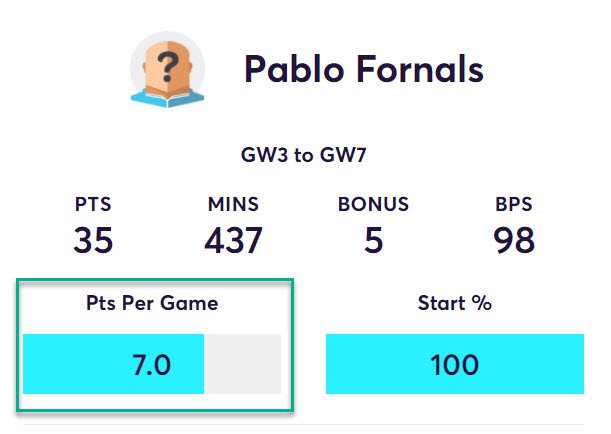 With three assists and two clean sheets over the last five gameweeks, Cresswell has averaged 6.0 PPG. No FPL defender has amassed as many as his 11 attempted assists over that period, while only Alexander-Arnold and Ayling (each three) have created more ‘big chances’ than his two. The Englishman has taken all eight of West Ham’s indirect free-kicks, while no teammate has taken more corners, which he has shared with Bowen (eight). West Ham have conceded just eight goals over the last six gameweeks, keeping two clean sheets. Only Arsenal (seven) have conceded fewer. Meanwhile, Brighton (24) are the only team to have allowed opponents fewer SiB than their 29. Fulham have scored just seven goals over the last six gameweeks and only West Brom, Arsenal, Wolves (all six), Burnley and Sheff. Utd (both three) have scored fewer. They have created just nine ‘big chances’ and landed 23 SoT over those matches. Our Fix Algorithm currently projects a 50% chance of a West Ham clean sheet and a point score of 4.0 for Cresswell.