Sterling came off the bench midweek in the Champions League to provide a goal and assist in a 2-0 win over Dinamo Zagreb. He has now scored in each of his last three appearances in all competitions, since being given a rest during the 8-0 win over Watford in gameweek six. As the Stats Sandbox graph shows, no FPL midfielder has scored more than his six goals this season, while only Abraham, Aubameyang (each seven) and Agüero (eight) have bettered that total across all positions. An average of 3.3 shots inside the box (SiB) per game ranks the England international first amongst all players, while only Agüero (1.57) has been afforded more than his 1.5 ‘big chances’ per game. Man. City top all the attacking metrics; goals (27), shots (150), SiB (108), shots on target (SoT) (58) and ‘big chances’ 35. Wolves play Besiktas away in Turkey on Thursday in the Europa League and their European exertions have taken a toll on their league form this season especially in defence. They have conceded 12 goals this season and only Chelsea (13), Newcastle (13), Norwich (16) and Watford (20) have conceded more. They have allowed 28 SoT in their seven matches at an average of four a game. Our Fix Algorithm projects a point score of 7.2 for Sterling. 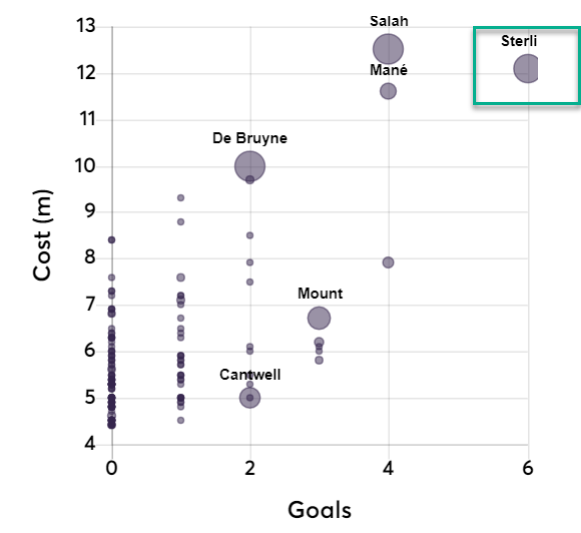 Arsenal’s 1-1 draw with Man. Utd saw Aubameyang net his seventh goal of the season and continue the run of returning points in every gameweek so far. He has  provided 20 Fantasy Premier League (FPL) involvements in 23 league matches this calendar year, with a total of 16 goals and four assists. The 30-year-old trails only Agüero (eight) for goals scored this season, while only Abraham (12) and Pukki (15) have fired more than his 10 SoT, amongst FPL forwards. A total of seven ‘big chances’ for the Arsenal talisman sees him rank sixth-best amongst all players. As the Fixture Analyser shows, Arsenal have a good run of fixtures for the next six games and the Gabonese is a great long term buy. Arsenal have scored 12 goals, the seventh-highest in the league and only Liverpool (41), Chelsea (43) and Man. City (58) have landed more SoT than the Gunners’ 37. They are also sixth for ‘big chances’ with 15. The Cherries are yet to keep a clean sheet this season and only Chelsea (13), Newcastle (13), Norwich (16) and Watford (20) have conceded more goals than their 12. Aston Villa (121), Norwich (122) and Arsenal (126) are the only sides to have allowed opponents more shots than Bournemouth’s 118 and only West Ham and Watford (both 23) have allowed more ‘big chances’ than their 20. Our Fix Algorithm backs the Gabonese to get on the scoresheet again with a point score of 6.7.

The defeat to Crystal Palace saw Norwich continue their struggles on the road this season but Pukki has five goals and two assists in the three games played at Carrow Road. No player has scored more than his five goals or fired more than his nine SoT during home matches, while only Abraham has taken more SiB (13 to 12). Only four FPL forwards have been afforded more ‘big chances’ (four) than the 29-year-old, during home matches. As the FPL Statistics feature shows, only De Bruyne (88%) is more owned by the Top 1000 than Pukki (72.5%). Norwich have scored eight goals at home, only Spurs (nine), Liverpool (ten), Leicester (ten) and Man. City (14) have scored more on home turf. They have landed 16 SoT in their three home matches at an average of over five a game. Their opponents Villa have conceded 11 goals this season and only Arsenal (126) have allowed opponents more shots than their 121. Our Fix Algorithm projects a point score of 5.2 for Pukki. 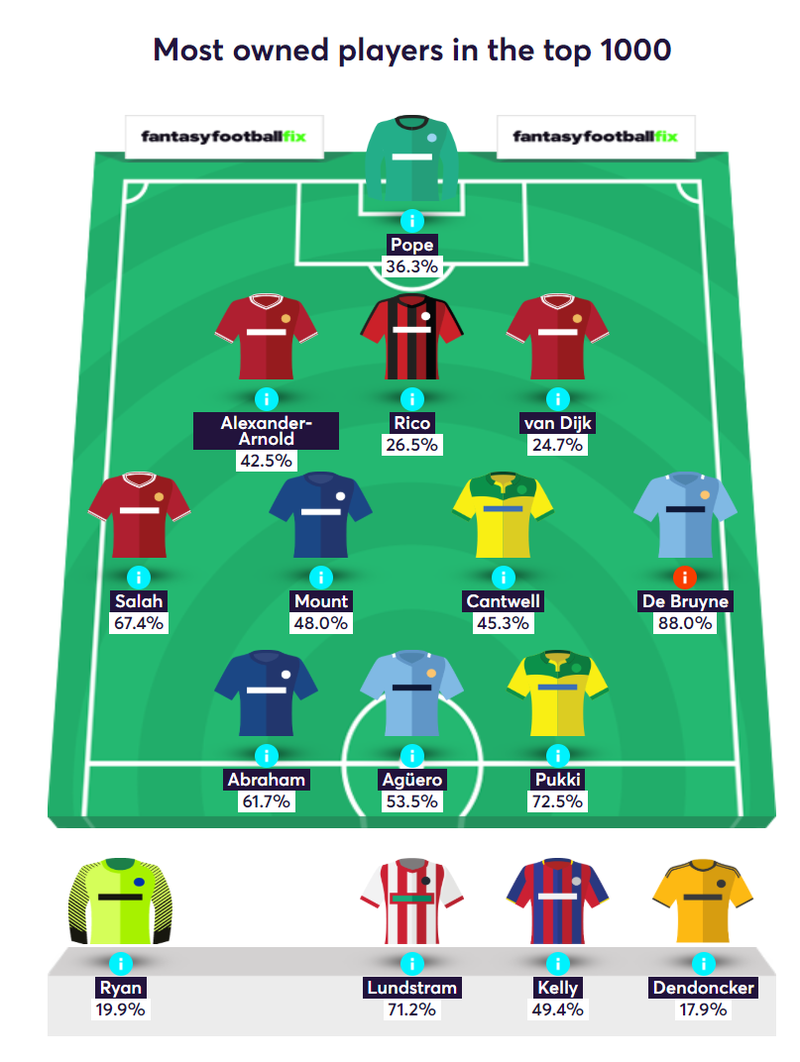 With De Bruyne doubtful due to a groin issue, Man. City may have to rely more heavily on D. Silva for creativity against Wolves. The Spanish magician has been directly involved in six goals this season, with four of those coming in the last two home matches (one goal, three assists). He provided four attempted assists compared to De Bruyne’s 10 during that period but the pair have each managed a total of three assists and as the Stats Sandbox table shows, no teammate completed more final third passes than David Silva (51). No team has scored more goals at home than Man. City’s 14 and the defending Champions are also top for ‘big chances’ (18) and SoT (27). Only Everton (10) and Watford (13) have conceded more goals than Wolves’ nine over the last four gameweeks, further proof that the Europa League is affecting their performances. Our Fix Algorithm projects a point score of 4.5 for D. Silva.

The narrow win over Sheff. United saw Liverpool earn their second clean sheet of the season, increasing Alexander-Arnold’s average to 5.3 points per game this season. A total of 23 attempted assists sees the right-back rank second only to De Bruyne (29), while only Firmino (six) and De Bruyne (10) have created more ‘big chances’ than his five. Set-piece deliveries continue to be a key reason for this, with no Liverpool teammate taking more corners (25) or attempting more indirect free kicks (three). Liverpool have only conceded five goals this season, the lowest in the league. The fact that they have allowed the fewest SoT (18) would also indicate that they have been unfortunate to keep only two clean sheets. Leicester have only scored three goals on their travels and Sheff. United (eight) are the only team to have taken fewer SiB on their travels than the Foxes’ 14. They are also third-worst for SoT with eight, only Brighton (seven) and Sheff. United (six) have landed fewer. Our Fix Algorithm projects a 50% chance of a Liverpool clean sheet and a point score of 4.9 for the right-back.