xFPL is calculated primarily using expected goals (xG) and assists (xA) which combine as Fantasy Premier League (FPL) involvements (xG + xA = xI), as well as expected clean sheets (xC). These numbers are a result of underlying statistics (i.e. shot type and location will give a probability of scoring = xG). xFPL is the combination of these statistics and factors in appearance and bonus points to give an overall expected FPL point score.

J. Ramsey tops the Custom Stats xFPL table for gameweek eight with a score of 9.5. The 21-year-old took two shots in the box (SiB), one of which was a 'big chance'. Zemura was the most creative player over the weekend with five attempted assists, the Bournemouth player notched the assist for Billing's goal which was classified as a 'big chance' created which led to an xFPL score of 5.8. No player took more shots than Maddison (seven), he took three SiB, landed three shots on target (SoT) and also attempted four assists which took him to an xFPL score of 5.1. Son led the way for SoT (four), the South Korean international scored from three of his four shots. Only one shot was taken inside the box, and just one of his efforts was classified as a 'big chance', which explains his low xFPL score of 7.0.

Plenty of managers have activated their wildcard ahead of gameweek nine and as the above image from our Transfer Analytics feature shows, the transfer market is already buzzing with Trippier, Saliba and De Bruyne the most popular targets. Gameweek eight's top scorer Son is also finding a lot of new suitors with the popular Salah making way. The highly-owned Jesus is the most sold player, and the Arsenal frontman picked up his fourth booking of the campaign against Brentford which means he is only one yellow card away from a one-match suspension. 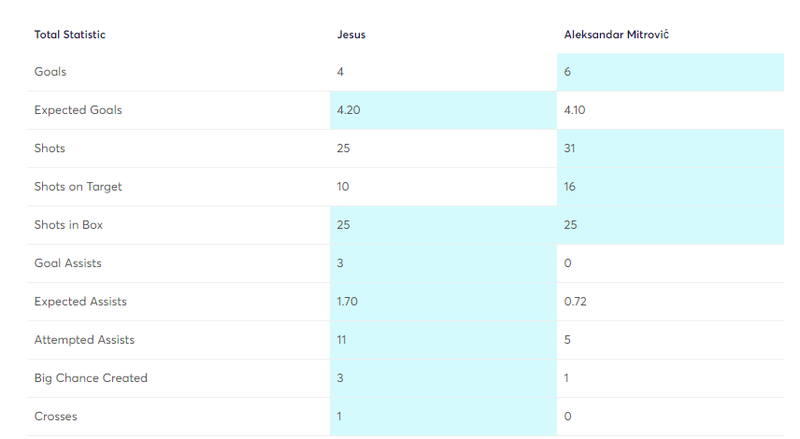 Arsenal now embark on a tricky run of fixtures where they play Spurs and Liverpool in gameweeks nine and ten followed by a fixture blank in gameweek 12, after their game vs. Man. City was postponed to fit in their already postponed game with PSV in the Europe League. Meanwhile, as the above image from our Player Heatmaps feature shows, the Serbian international is only 0.1 behind Jesus for 'Expected Goals' and is over 1.0m cheaper. Fulham are also ranked fourth-best on our Fixture Planner for 'attack difficulty' as per the below image, so that transfer could be a sound strategy for gameweek nine onwards.