Kane has scored four goals in as many gameweeks, joint-top with Bamford and Vardy amongst forwards. He is top for shots (25) and shots on target (SoT) (11) while only Vardy and Watkins (both six) have been afforded more ‘big chances’ than his five. No forward has created more chances (eight). Spurs have scored 11 goals over the last four gameweeks, the highest in the league. Their total of 15 ‘big chances’ is beaten only by Liverpool (17) and they are tied with the Champions for SoT (29). Brighton have conceded nine goals over the last four gameweeks keeping no clean sheets. Although they have conceded the fewest shots in the box (SiB) (16) over the last four gameweeks, it is worth mentioning that Palace had just one shot against them and they also played shot-shy West Brom so the numbers are slightly flattering. Only six teams have conceded more ‘big chances’ than the Seagulls’ seven. Our Fix Algorithm currently projects a point score of 7.1 for Kane.

Salah will be looking to add to his total of three goals in the last four games as the Champions host West Ham at Anfield. Only Son (four) has scored more goals amongst midfielders over the aforementioned period and the Egyptian is top for shots (16) and (SoT) (eight). Only Son (five) and Mane (six) have been afforded more ‘big chances’ than his four and no midfielder has created more ‘big chances’ (four). The Egyptian is owned by 76% of the top 1000 as per our FPL Statistics feature. Liverpool have scored four goals over the last four gameweeks, only Chelsea (10), West Ham, Villa and Spurs (all 11) have been more prolific. Their total of 47 SiB is bettered only by Leeds (53) and no other side has created more ‘big chances’ (17) or landed more SoT (29). West Ham have conceded four goals in their last four matches and have allowed opponents 40 shots, 15 SoT and five ‘big chances’. Our Fix Algorithm projects a point score of 6.9 for Salah. 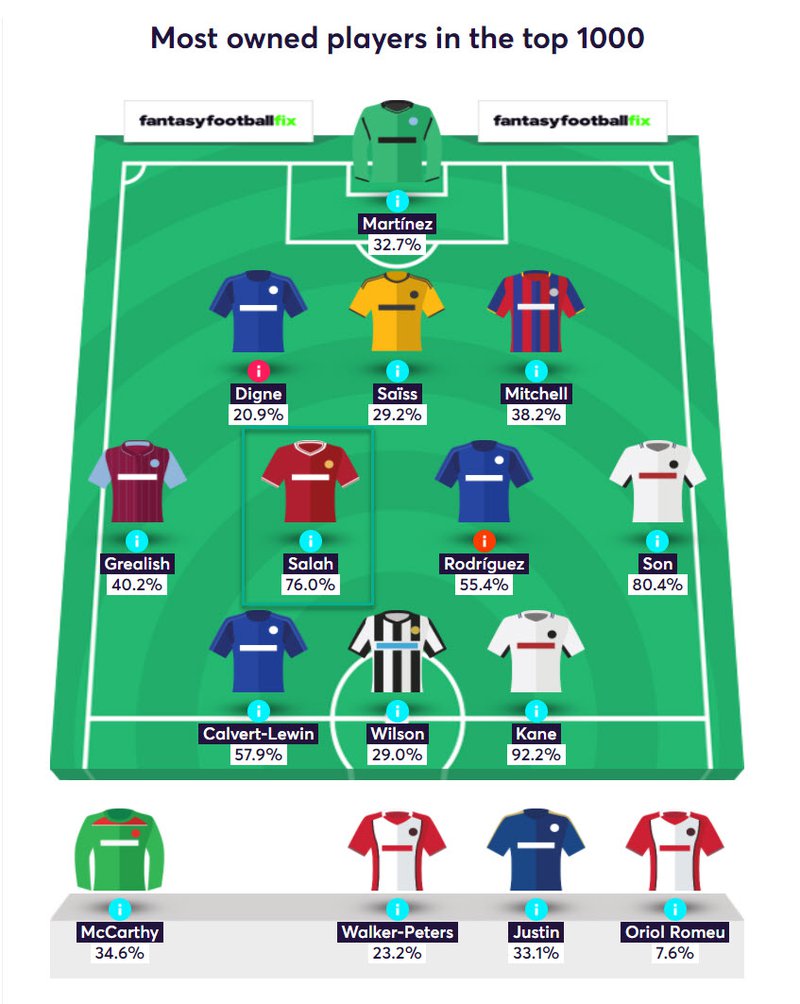 Rashford hit a 16 minute hattrick against Leipzig in the Champions League midweek and looks to be hitting form with two goals over the last four gameweeks. Only Mahrez (13), Salah (16) have taken more shots than his 12 amongst midfielders and as the Stats Sandbox shows, only Salah (eight) has landed more SoT than his seven. Man. Utd have scored eight goals over the last four gameweeks, only Liverpool (nine), Chelsea (10), West Ham, Villa and Spurs (all 11) have scored more. Only Chelsea (22), Villa (23), Leeds (26), Spurs and Liverpool (all 29) have landed more SoT than their 21. Arsenal have conceded six over the last four gameweeks, keeping no clean sheets. Only Man. City, Sheff. Utd (both 10), Man. Utd (12), Liverpool and Fulham (all 13) have allowed more ‘big chances’ than their nine. Our Fix Algorithm projects a point score of 4.7 for Rashford.