An assist against Chelsea means Salah has returned points in all but one of the opening six gameweeks, delivering a total of seven goal involvements (four goals, three assists). De Bruyne (36) is the only midfielder to return more Fantasy Premier League (FPL) points than Salah (35) in the last four gameweeks, with the Egyptian averaging 8.8 points per game. As per the FPL Statistics feature, the Egyptian is still owned by over 60% of the Top 1000 players and no midfielder has taken more than his 10 shots inside the box (SiB) during the last four weeks, or been afforded more than his five ‘big chances’, while only Son (seven) and McGinn (six) have fired more than his five shots on target (SoT). Liverpool have scored 17 goals this season, and only trail Man. City in terms of attacking statistics. They also only trail the defending Champions for goals (17 to 24), shots (97 to 130), SoT (36 to 49) and ‘big chances’ (20 to 32). Although Sheff. Utd have only conceded six goals so far, the underlying statistics indicate they have been fortunate. Only nine teams have allowed more than their 24 SoT and only five teams have allowed more ‘big chances’ than their 13. Our Fix Algorithm projects a point score of 6.4 for Salah. 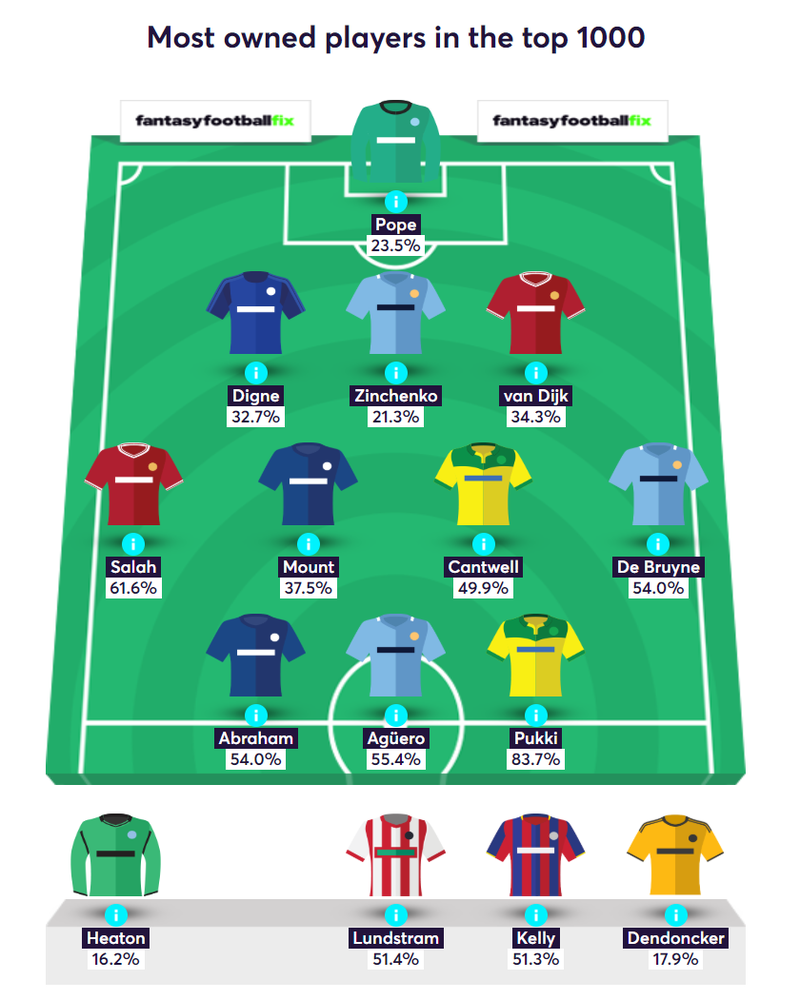 Kane opened the scoring against Leicester with a well-taken finish, as he guided the ball past Schmeichel, even though he lost his balance. The Spurs forward has been directly involved in five goals this season (four goals, one assist) after finding an FPL return in each of his last three outings. As the Stats Sandbox feature shows, only five players have attempted more shots in the last three gameweeks, while only Abraham and Deulofeu (each seven) have fired more than Kane’s six SoT. He’s had 17 touches in the opposition’s penalty box during that period, with Maupay, Deulofeu (each 18) and Agüero (32) the only forwards with more. Only Liverpool (17) and Man. City (24) have scored more goals than Spurs’ 12 this season and they are also ranked fifth for shots with 88. The Saints have shipped nine goals so far, with only six teams conceding more. They are ranked sixth worst for SoT allowed (28) and ‘big chances’ conceded (13). Our Fix Algorithm projects a point score of 6.4 for Kane.

Mount overcame an ankle injury to start against Liverpool in gameweek six and came close to finding a late equaliser with his only shot of the game. The 20-year-old has returned an average of 5.3 points per game in the last four gameweeks and Mané, Salah (each three) and Bernardo Silva (four) are the only midfielders with more than his two goals scored. Nine midfielders have attempted more than his 10 shots in that time but only Salah (five) has been afforded more than his three ‘big chances’. Only Liverpool (17) and Man. City (24) have scored more goals than Chelsea’s 12 and the underlying statistics indicate that the Blues’ attack is indeed the third best in the league. They only trail Liverpool and Man. City for shots (96), SoT (33) and ‘‘big chances’’ (15) and will be desperate to get their first home win in the league under Lampard. Brighton have conceded eight goals in their six matches and allowed 21 SoT, an average of over three a game. Our Fixture Analyser shows that Chelsea have the second best attacking fixtures for the next six gameweeks, making Mount a great long term buy and our Fix Algorithm backs Mount to get attacking returns with a point score of 4.8.

Wilson netted a late goal in the 3-1 win over Southampton last Friday, after Gunn and Bednarek got in each other’s way to allow him a free run at goal. The Bournemouth forward has found an FPL return in every gameweek so far this season, with four goals and three assists to his name. As the Interactive shot map below shows, he’s only taken five shots in the last four gameweeks but each one has been of high quality; from inside the box, on target and deemed by Opta to be a big chance. Only Abraham (seven) and Agüero (10) have been afforded more ‘big chances’ during that period. The Cherries have scored 11 goals, the fifth highest in the league and have found the back of the net in every game so far. Only Southampton, Chelsea (both 15), Liverpool (20) and Man. City (32) have fashioned more ‘big chances’ than Bournemouth’s 13. Although West Ham have kept three consecutive clean sheets, their underlying statistics indicate they have been fortunate. Only seven teams allowed more SoT than their 27 and only Watford (21) conceded more ‘big chances’ than their 19. Our Fix Algorithm projects a point score of 5.1 for Wilson.

The win over Chelsea last Sunday saw Alexander-Arnold find his fourth goal involvement of the season (one goal, three assists), opening the scoring with an unstoppable free kick.No FPL defender has fired more SoT (three) or been afforded more ‘big chances’ (two) in the last four gameweeks, while only Otamendi has taken more total shots (seven to six). A total of 18 attempted assists in the same period sees the right-back rank first across all positions, ahead of De Bruyne with 15. No team has conceded fewer goals than Liverpool’s five and they have been unlucky to keep just one clean sheet. They have allowed only 16 SoT, the lowest in the league and are also fifth best for ‘big chances’ conceded with 10. Their opponents Sheff. Utd have taken the fewest shots (57) and SoT (15) in the league and our Fix Algorithm projects a 60% chance of a Liverpool clean sheet and a point score of 5.2 for the right-back.