C. Wilson tops the Custom Stats xFPL table for gameweek seven with a score of 13.0. The Englishman took four shots in the box (SiB), two of which were ‘big chances’ and also created a ‘big chance’. No player was afforded more ‘big chances’ than Bamford (three), the Leeds forward notched an xFPL score of 7.3 with four SiB indicating that he was unlucky not to get any FPL returns. No player took more SiB than Grealish’s five, he also created two ‘big chances’, registering an xFPL score of 7.6. Cancelo was joint-top with Neto, Harrison, Targett, Neves and Barkley with four chances created each. The Portuguese notched the highest xFPL score (7.5) amongst the aforementioned players.

2. Investing in the Hammers

The Hammers have faced Wolves, Leicester, Spurs, Man. City and Liverpool over the last five gameweeks and now embark on a favourable run of fixtures starting with the visit of Fulham in gameweek eight. Their assets are put under the microscope using the Fix Stats Sandbox for the last six gameweeks. Surprisingly, Fornals comes out on top with an xFPL score of 29.63 and FPL points, with 37. Only Soucek (13) and Antonio (14) have taken more shots than the Spaniard’s 11 and only Cresswell (13) has created more chances than his six. Antonio leads the way for expected goals (xG) (2.50) and ‘big chances’ (four) despite playing a game less due to his injury. Soucek comes in second for SiB (nine) but his xG of just 0.47 indicates these were not high quality chances. Bowen’s numbers are also encouraging with 11 shots and an xFPL score of 28.01, just marginally behind Masuaku (28.40), Cresswell (28.69) and Fornals (29.63).

Budget forwards such as Mitrovic, Adams, C. Wilson and Watkins were amongst the points in gameweek seven and using the Fix Comparison Matrix for the last three gameweeks the most popular options are compared. Despite failing to return in gameweek seven, Bamford leads the comparison for goals (three), shots (16), shots on target (SoT) (seven), ‘big chances’ (six) and xFPL (20). The fact that he has at least double the number of ‘big chances’ compared to the rest indicates the quality of chances he is being presented with. Mitrovic and Watkins are the most creative with four attempted assists apiece but these are not great numbers over three matches. C. Wilson has had some difficult fixtures over the last three with games against Man. Utd, Wolves and Everton which to an extent mitigate his poor SoT numbers (three). His xFPL score of 19 is also largely inflated by the 13.0 he racked up against Everton. 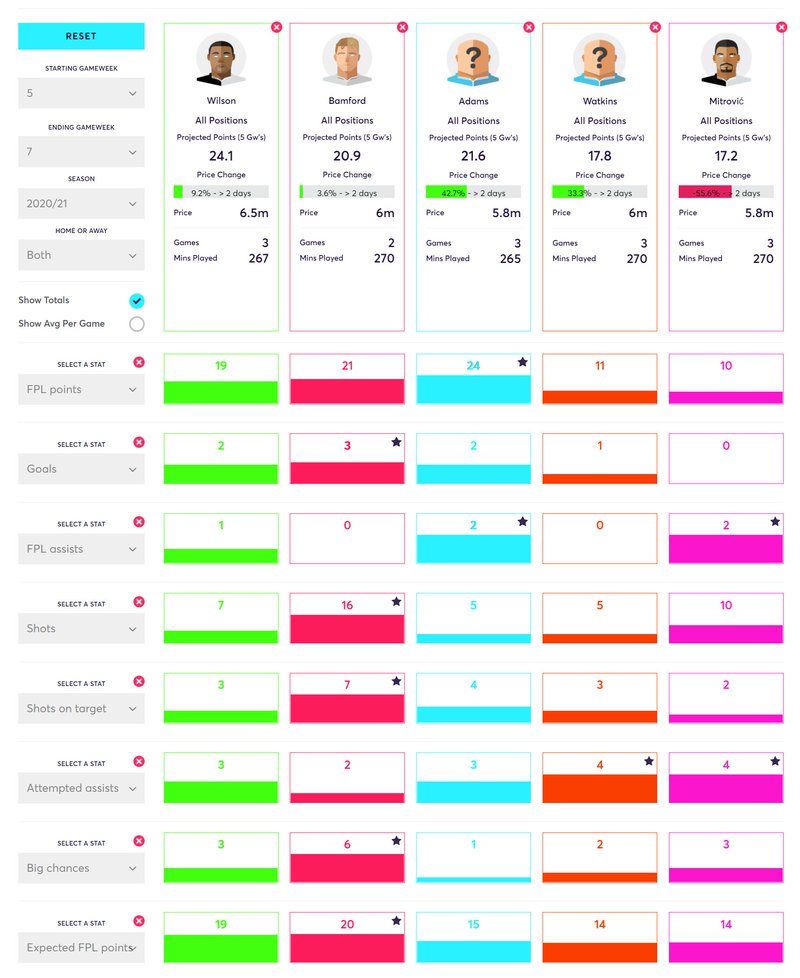