Zaha tops the Custom Stats xFPL table for gameweek six with a score of 13.0. The Ivorian took four shots in the box (SiB), two of which were ‘big chances’ and also created two ‘big chances’. No player took more shots than Bamford’s nine or landed more shots on target (SoT) (four). Seven of these shots were in the box and two were ‘big chances’ , leading to an xFPL score of 9.8. Cairney and Harrison were the week’s most creative players with five attempted assists each, notching xFPL scores of 5.1 and 4.3 respectively.

2. The case for Chilwell

Digne is suspended for one game (after his suspension was reduced from three games), due to his red card against Southampton and using the Stats Sandbox feature for the last three gameweeks, the replacement options are put under the scanner. Chilwell tops the table for chances created (nine) and FPL points (27) over the last three gameweeks. Only Kilman (21.06) beats him for xFPL (17.85). Alexander-Arnold leads the way for shots (five) but is ranked only 10th for expected goals (xG) (0.24) which indicates his shots are of poor quality. Ayling (0.71) leads the way for xG and the Leeds full-back has also created five chances with only Robinson (six), Cresswell, Robertson (both seven) and Chilwell (nine) attempting more.

Son registered his third consecutive double-digit haul with his goal against Burnley and his numbers are compared to other premium midfielders using the Fix Comparison Matrix over the last two gameweeks. Mané’s numbers are impressive, the Senegalese (four) has registered twice as many ‘big chances’ as Salah (two). Sterling’s numbers are poor in comparison, the Englishman has the fewest shots (three), SoT (two) and attempted assists (one). B. Fernandes is clearly the most creative of the lot, his 10 attempted assists is almost as many as the others combined (11). Losing Sterling for any of the other options seems like a prudent move. 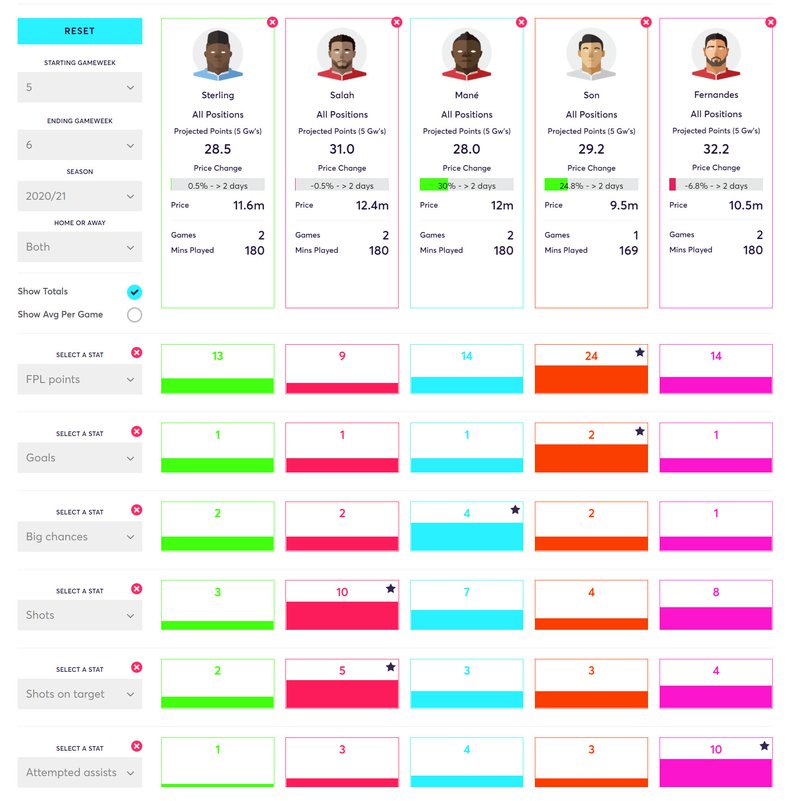