The international break saw Sterling continue his impressive start to the season, with two goals and four assists in two matches for England. His total of five goals in the opening four gameweeks can only be bettered by teammate Agüero (six) and no player has more expected Fantasy Premier League (xFPL)  points than Sterling (28.99) this season. As the Fix Comparison Matrix shows below, the 24-year-old has been afforded six 'big chances', ranking joint-first with Salah, while only Pukki (13) has fired more than his 12 shots inside the box (SiB). Man. City’s attack is on top for every statistic; goals (14), shots (77), SiB (56), SoT (30) and ‘big chances’ (18). Norwich’s backline is ravaged by injuries and their defensive numbers indicate they are in for a tough afternoon. No team has conceded more goals than the Canaries’ 10 nor allowed more SiB than their 47. They have also allowed opponents more SoT (26) than any other team and their total of 13 ‘big chances’ conceded is beaten only by Bournemouth (14) and West Ham (15). Our Fix Algorithm projects a point score of 7.5 for Sterling. 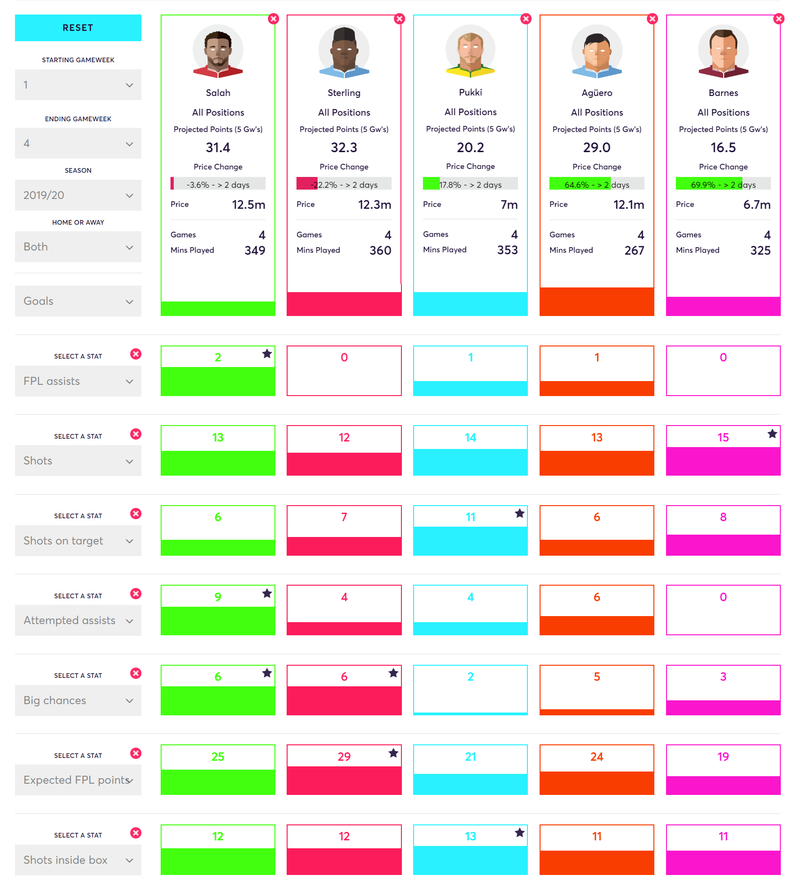 Aubameyang netted his third goal of the season to earn Arsenal a point in the North London derby, taking a total of four shots during the game, with three SiB. As the Fix Heatmaps feature shows, despite facing Spurs and Liverpool in the last two matches, the Arsenal forward has found an FPL return in every gameweek so far, producing an average of 6.5 points per game. He has been directly involved in 16 league goals during this calendar year (12 goals, four assists), compared to 18 for Salah (12 goals, six assists) and 20 for Sterling (13 goals, seven assists), while his total of 21 'big chances' in that time can only be bettered by Vardy (22). The Gunners have scored six goals so far, only Spurs (seven), Man. United (seven), Liverpool (12) and Man. City (14) have scored more. They have taken 58 shots, the sixth-highest in the league, which is impressive considering they have played both Liverpool and Spurs already. The Gunners are also ranked fifth for SoT with 22. Only Chelsea (nine) and Norwich (10) have conceded more goals than Watford’s eight and only Bournemouth (14) and West Ham (15) have allowed opponents more ‘big chances’ than their 10. Our Fix Algorithm projects a point score of 5.6 for the Gabonese.

Despite suffering two price drops already this season, Wilson has found an FPL return in every game so far (one goal, three assists). He has only fired four attempts at goal during the first four gameweeks but they were all SiB, three found the target and three were deemed to be 'big chances'. Nine attempted assists ranks the 27-year-old top amongst forwards, ahead of Agüero and Abraham (each six), while only eight players have produced more, across all positions. The Cherries are top of our Fix Fixture Analyser for the next six weeks and it is a good time to bring in one of their attackers. Bournemouth have found the net in every game thus far, scoring five goals. Only seven teams have created more ‘big chances’ than their eight and they are ranked ninth for SoT with 16. Although Everton have allowed only 12 SoT, the third-lowest in the league, they are third bottom for ‘big chances’ conceded with 10 indicating that they have been fortunate to only ship four goals. Our Fix Algorithm projects a point score of 3.8 for Wilson.

A 3-2 win over Wolves saw Sigurdsson pick up his first assist of the season and the underlying numbers suggest he’s been unfortunate not to return more points. As the Custom Stats table shows, The 30-year-old has fired more attempts at goal from open play (eight) than any teammate this season, while only Richarlison has taken more total shots (10 to eight). 10 attempted assists by the Icelandic international ranks joint-fifth in the league just behind Pogba (11), Lanzini, Alexander-Arnold (each 14) and De Bruyne (16). Although Everton have only scored four goals so far, their underlying statistics present cause for optimism. They are ranked eighth for shots (49) and SiB (32) but their finishing has let them down as only 11 of these are SoT. Only Arsenal (65), Norwich (68), Spurs (71) and Villa (77) have allowed opponents more shots than Bournemouth’s 62 and only West Ham (15) have conceded more ‘big chances’ than their 14. Our Fix Algorithm projects a point score of 5.0 for Sigurdsson.

Before the international break, Alexander-Arnold picked up his third assist of the season to help see out a 3-0 win over Burnley and the right-back is the most popular defensive transfer this week as per our Transfer Stats feature. He has already risen by 0.1 this week and you can monitor his further price movements using the Fix Price Change predictor. 14 attempted assists by the right-back in the opening four gameweeks ranks first amongst defenders, while only De Bruyne (16) has provided more across all positions. The Belgian is also the only player to create more 'big chances' this season (six to four). The Reds kept their first clean sheet of the season against Burnley in gameweek four and only Palace (two) have conceded fewer goals than their three. They have allowed opponents just 13 SoT, and only Everton (12), Leicester (11) and Palace (10) have allowed fewer. Newcastle have only scored three goals this season, while Watford (two) are the only team to have scored fewer. Five teams have taken fewer shots than Newcastle’s 42 and they are ranked eighth-worst for SoT with 14. Our Fix Algorithm projects a 60% chance of a Liverpool clean sheet and a point score of 5.6 for the right-back. 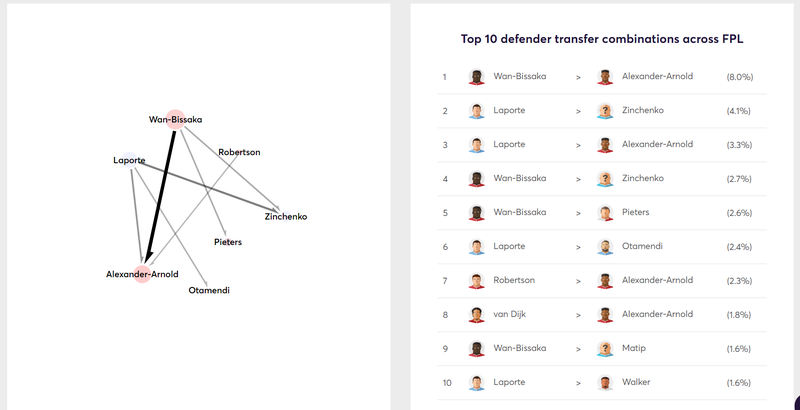