“It must be September” were the cries heard across social media after Kane (12.4) managed a monster double-digit haul of 13 points, away to Everton in gameweek four. For those that kept faith during a dire August period, it must have felt like just deserts. It was no secret that Kane’s Fantasy Premier League (FPL) underlying numbers for August were absolutely astonishing, making it harder to fathom why he had not managed to find the back of the net. The Englishman averaged a whopping 8 shots a game in the first three gameweeks, compared to Lukaku’s (11.7) 4.7. Kane, has attempted 40% more shots than anyone else in the first four gameweeks with 28, and although that number hints at a greedy side to his game, he has still managed to lay on seven attempted assists. Kane was on the scoresheet again on Wednesday, with a brace against Borussia Dortmund, who are without question a sterner test than gameweek five’s opponents. Swansea travel to Wembley this weekend, a side that have conceded 15 goals in their last five meetings up against Tottenham. Our Fix algorithm projects a score of 6.1 points for Kane in gameweek four, no player is projected to score higher. Captain banker. 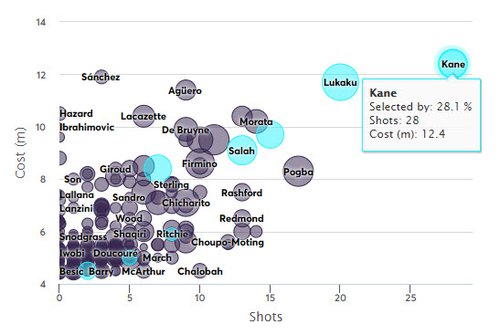 Davies (5.7) has produced the most penalty area actions (dribbles/passes into, or out of the opposition’s penalty box) when analysing all FPL defenders, with 32 actions. The attacking left-back has also managed more attempted assists, with 13, than any other defender. Creswell (5.0) is in second, with seven, with a host of others on six. The Welsh international has also been tasked with some corner duties (having already taken 13 – The joint most of any defender in the game) demonstrating his must own status, even at this early stage of the season. The ever-improving Spurs’ man currently sits joint third in the defensive stat tables for shots on goal, having already fired off six in just four games. Swansea have only managed to score six goals in their last five Premier League encounters versus Tottenham, and after failing to score in their gameweek four tie versus Newcastle, it appears the Sigurdsson (8.5) hangover could be starting to take its toll. Our Fix algorithm suggests a score of 5.7 points can be achieved, which clearly factors in attacking returns alongside clean sheet potential. 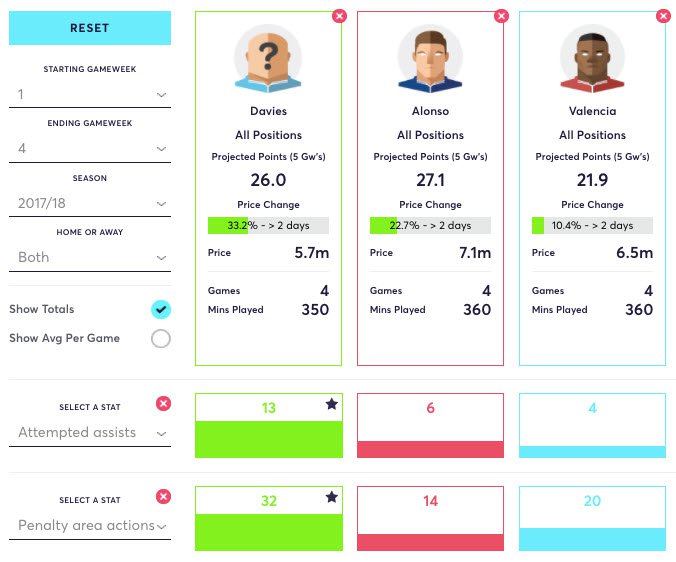 Even before the loss of Mané (9.5), we had already set our sights on his Liverpool teammate, Salah (9.1), for gameweek five. The Egyptian winger has averaged more shots (3.3) and shots on target (2.3) when compared to other popular choices in Mkhitaryan (8.4), Mahrez (8.5), Alli (9.5) and De Bruyne (9.9), which is highlighted in our info-graphic below. He is also in an elite club of players who have managed nine shots on target so far, including Kane, Lukaku and more interestingly, Joselu (5.5). The next in class from the midfielders is Mané and Eriksen (9.7) with seven and six respectively. His supreme dribbling ability and pace has already caught many fans’ eyes, and while there have been discontent groans from some surrounding his wastefulness, his shooting accuracy contradicts such thoughts. Of the 11 players that have had 13 shots or more, Salah has the highest shots on target ratio with 69.2%, more efficient than the likes of Jesus (10.4), Morata (10.2), Eriksen (9.7) and Pogba (8.3) to name a few. Burnley are without their Goalkeeping hero, Heaton (5.0) for gameweek five, so our Fix algorithm prediction of 5.1 points does not look out of place here. 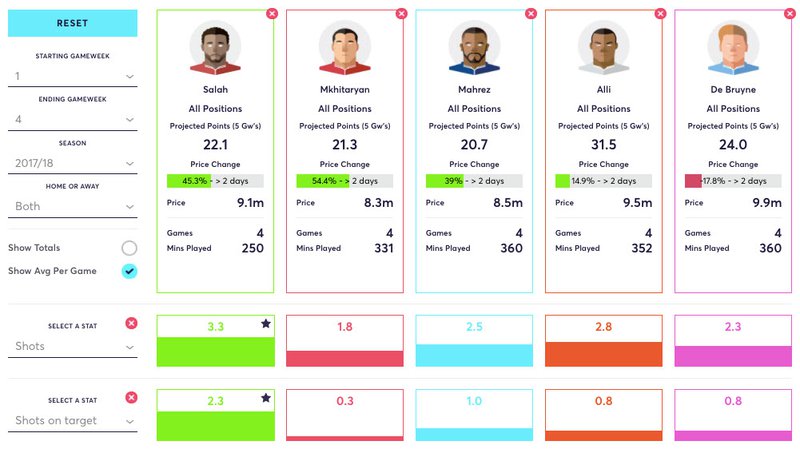 Four goals from four games is enough in itself for us to reselect Lukaku in our “Top Five” line-up. Belgium’s first choice striker has had the second highest number of shots behind Harry Kane over the first four gameweeks. However, his shooting accuracy is currently streaks ahead of Kane’s with 45% of his shots hitting the target, versus Kane’s 32.1%. Like Kane, Lukaku has laid off passes to his teammates who are in a goal-scoring position on seven occasions, which are significant sums for goal-getting forwards in the ilk of these two. Mané and Alli have attempted less assists to further put that into perspective. Everton have not beaten Man. United in their last five meetings, and Lukaku will be fired up to help his new club earn victory over his former team. Our Fix algorithm believes he can score around 5.6 points, and we expect him to be captained heavily, again. 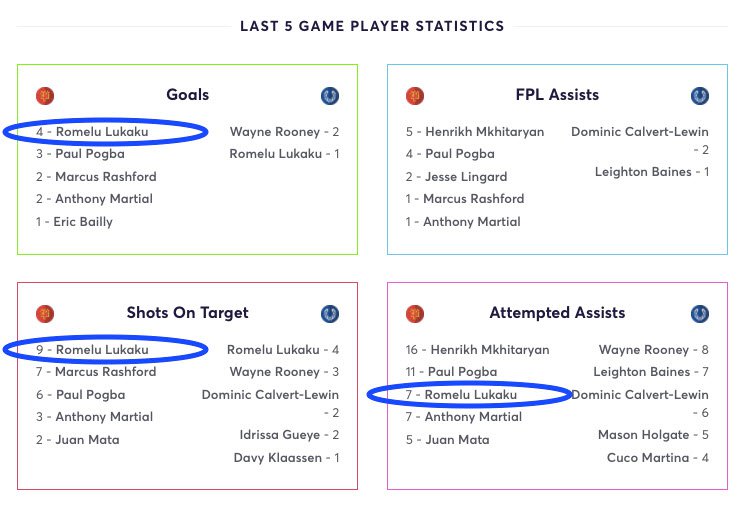 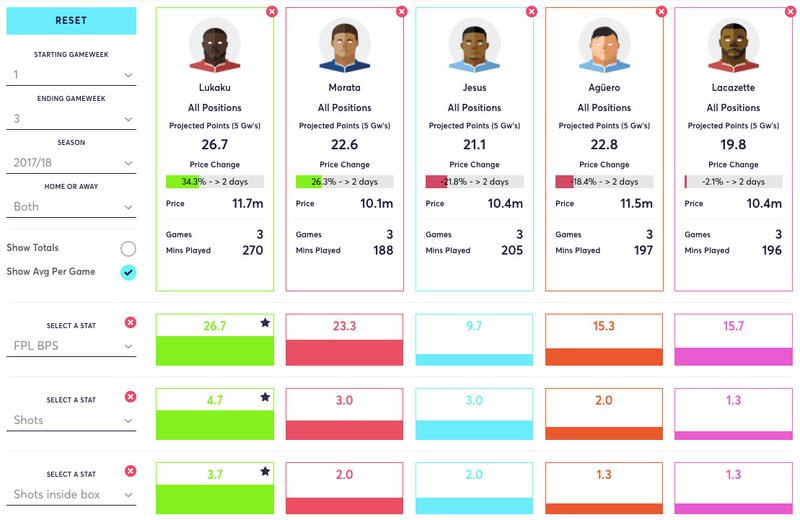 Mahrez (8.5), who is currently owned by 5.3%, is just the player if you have both Pogba (8.3) and Mané this week. Particularly, if you wish to be aggressive, in order to make up ground in your mini-leagues. Of course, there are other midfield options being talked up as replacements, but this is a player that not only scored 17 goals in the Premier League two seasons ago, but is also currently in the top 10 for shots on goal, and the top six for shots on target of all midfielders. The Algerian winger is also fourth for successful dribbles completed with 12, and has attempted an assist on five occasions already. He currently has three FPL assists to his name, along with two bonus points and with an enticing run of fixtures which includes Huddersfield, Bournemouth, West Brom, Swansea, Everton and Stoke over the next seven weeks, this is more than just a hunch. Huddersfield would have been buoyed by their start, but have failed to score in their last two games and succumbed to a loss at West Ham, who were without a win in their first three. Leicester will want to get things back on track after defeats to Chelsea and Man. United and we are expecting a couple of goals for the Foxes here. Our Fix algorithm projection of 4.1 points looks bang on the money. 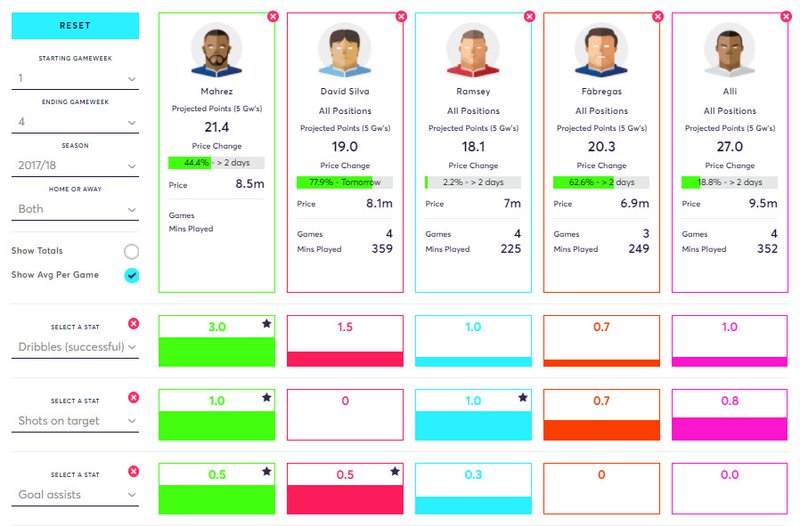