Having played a direct hand in four goals over the last five gameweeks (three goals, one assist), Salah has averaged 7.0 points per game (PPG). As the Stats Sandbox shows, no midfielder has fired more than his 17 shots in the box (SiB), with only Benteke (21) able to better that total across all positions. Meanwhile, Wood is the only player that can equal the Egyptian for ‘big chances’ (six), while only Watkins has taken as many touches in the opposition’s box (48). Liverpool have scored 13 goals over the last six gameweeks, more than any other side. They are also top for shots (116), shots on target (SoT) (39) and ‘big chances’ (23). Palace have conceded 12 goals over the last six gameweeks and only West Brom (14) have conceded more. The Eagles are ranked 11th for shots (78) conceded and sixth for ‘big chances’ conceded (10). Our Fix Algorithm currently projects a point score of 7.5 for Salah.

Kane has picked up six goals in nine away matches since the turn of the year, averaging 5.7 PPG on his travels. No forward has attempted as many as his 38 shots on the road in that time, while only Watkins has landed more SoT (17 to 14). A total of 11 attempted assists for the England captain trails only Iheanacho (12), Firmino (17) and Watkins (19). He is rated at 100% to start as per our Predicted Lineups feature. Spurs have scored 12 goals over the last six gameweeks and only Liverpool (13) have been more prolific. Their total of 34 SoT is only bettered by Villa (35), Leicester (36) and Liverpool (39). Leicester have conceded nine goals over the aforementioned period and are ranked seventh for ‘big chances’ conceded (11). Our Fix Algorithm currently projects a point score of 5.2 for Kane. 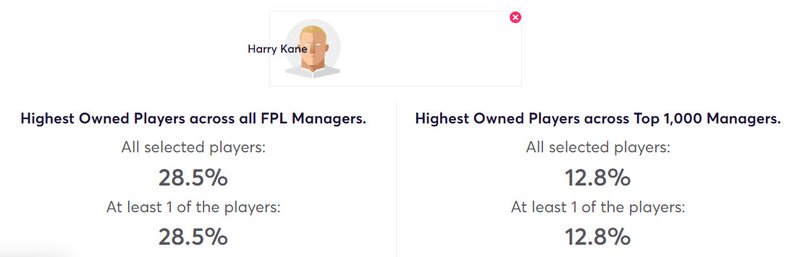 After a double-figure return against Southampton midweek, Bamford has earned an average of 4.3 PPG in the last six gameweeks. The Englishman has recorded five ‘big chances’ during that period and is only ranked behind Kane, Adams (each six) and Wood (seven) amongst forwards. No teammate can better his 11 SiB or his seven SoT. He is the most transferred-in player this week as per our Transfer Stats feature. Leeds have scored 10 goals over the last six gameweeks and only Man. City, Leicester (each 11), Newcastle, Spurs (each 12) and Liverpool (13) have found the back of the net more often. Their total of 30 SoT can only be bettered by Palace (32), Spurs (34), Villa (35), Leicester (36) and Liverpool (39). West Brom have conceded 14 goals over the last six gameweeks, the most in the league. No side has allowed opponents more SoT than the Baggies (50) while only Liverpool (19) have allowed opponents more ‘big chances’ than West Brom (16). Our Fix Algorithm currently projects a point score of 5.3 for Bamford. 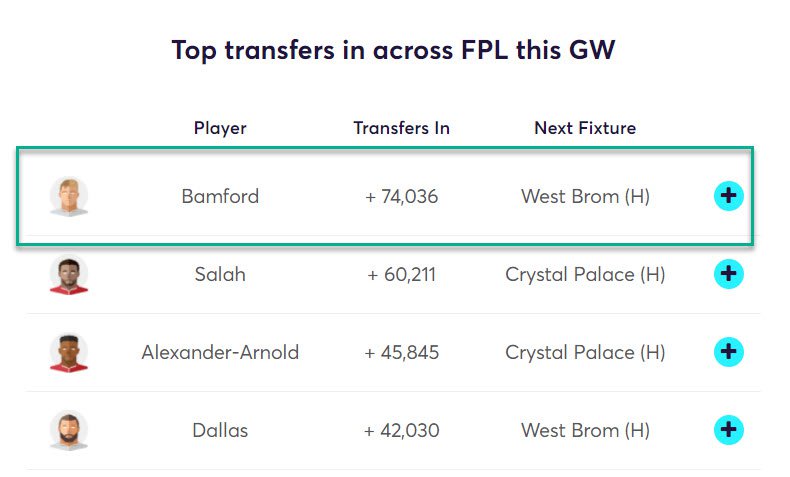 Lingard set up Antonio to secure a 3-1 win over West Brom on Wednesday night, ending a run of four matches without a return. The 28-year-old has racked up five goals and two assists in seven home matches since completing his loan move (gameweeks 22 to 37), averaging 7.1 PPG as per our Fix Heatmaps feature. Meanwhile, only Bale (13) and Fernandes (17) have landed more than his 12 SoT amongst midfielders. West Ham have scored eight goals over the last six gameweeks and only Newcastle, Leicester (each 17) and Liverpool (23) have created more ‘big chances’ than the Hammers’ 16. Southampton have conceded nine goals over the last six gameweeks, keeping no clean sheets. Only Villa (34), Newcastle (35), Sheff. Utd (37) and West Brom (50) have allowed opponents more SoT than the Saints’ 32. Our Fix Algorithm currently projects a point score of 6.2 for Lingard. 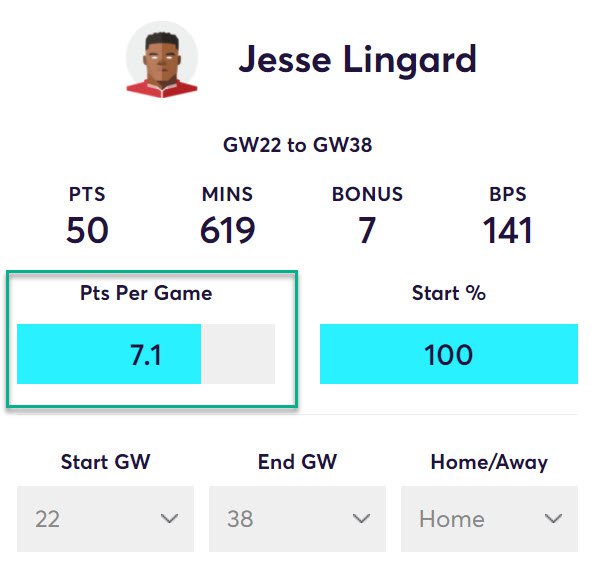 With a direct involvement in six goals over the last eight gameweeks (one goal, five assists), Alexander-Arnold has averaged 7.6 PPG. The right-back has produced league-leading numbers of 28 attempted assists, six ‘big chances’ created and 22 successful crosses, during that spell. His total of 18 shots ranks joint-first amongst defenders, which is on par with Dallas. Liverpool have conceded five goals over the last six gameweeks, keeping two clean sheets. Only Leeds, Arsenal (each four) and Chelsea (three) have conceded fewer. The Merseyside outfit are ranked eighth for shots conceded (68) and seventh for SoT conceded (23). Palace have scored eight goals over the last six gameweeks, but only four teams - Man. City (eight), Sheff. Utd (six), Fulham (four) and Wolves (three) - have created fewer ‘big chances’ than the Eagles (nine) over that period. Our Fix Algorithm

currently projects a 50% chance of a Liverpool clean sheet and a point score of 5.8 for the right-back.