Mané has enjoyed his best ever Premier League goal-scoring season, matching Agüero and Aubameyang’s 20 goals scored and just trailing teammate Salah (22). The last four gameweeks have seen the Senegalese international score three times from 10 shots inside the box (SiB), with only Fraser (five) and Salah (six) contributing to more goals from midfield. As the Custom stats table shows, his total of five ‘big chances’ ranks joint-first amongst midfielders alongside Sterling, and is ahead of Redmond, with four, and Salah, Hazard and Jota, with three. Over the last six gameweeks, no team has scored more goals than Liverpool’s 17, and the Reds have registered 32 SoT and 16 ‘big chances’ in that time. Their opponents Wolves have conceded eight goals over the same period, allowing opponents 15 SoT and 14 ‘big chances’. Our Fix Algorithm projects a point score of 6.6 for Mane.

It was a frustrating afternoon for Pogba against Huddersfield, as the Frenchman struck the woodwork twice, taking a total of four shots during the dire 1-1 draw. The World Cup winner has found two goals in the last four gameweeks, both of which came from the penalty spot. However, he did produce 13 shots during that period, with six being SiB, ranking first amongst teammates. As the Custom stats table shows, only Rashford has fired more shots on target (SoT), with five to Pogba’s three. Across the Man. United midfield only Mata could match his total of nine attempted assists during that spell. The Red Devils have scored 33 goals in their 18 home matches this season while only four other teams managed more. Their total of 115 SoT can only be bettered by Chelsea (117), Liverpool (117) and Man. City (146). Cardiff have conceded 31 goals on their travels and only West Ham (57) and Fulham (63) have allowed opponents more ‘big chances’ than Cardiff’s 55. Our Fix Algorithm projects a point score of 6.2 for Pogba.

It took a wonder goal from Kompany to drag Man. City over the line against Leicester but Aguero can count himself unfortunate after failing to score on two occasions, forcing impressive saves from Schmeichel both times. As the Custom stats table shows, the Argentinian has returned a total of 15 Fantasy Premier League (FPL) involvements (eleven goals, four assists) during this calendar year (gameweek 21 - 37), ranking joint-first amongst forwards, alongside Vardy and producing an average of 6.4 points per game (PPG). His total of 21 SoT ranks joint-first with Rashford, while only Vardy (11.3) and Aubameyang (11.2) have higher expected goals values than Agüero (9.9). The Cityzens have scored 12 goals over the last six gameweeks and top the table for both shots (138) and SoT (44). Their opponents Brighton have conceded a whopping 14 goals over the same period, with only Huddersfield (18) faring worse. The Seagulls allowed opponents 34 SoT and 15 ‘big chances’ across those matches. Our Fix Algorithm projects a point score of 5.5 for the Argentinian.

Rashford has found the majority of his returns this season against teams outside of the ‘top six’, amassing 13 FPL involvements (seven goals, six assists) in 16 starts against those sides, at an average of 5.5 PPG. The 21-year-old is without a goal since gameweek 32 but he has been shooting more frequently than any other teammate over their last four matches (gameweek 35 - 37), taking 10 goal attempts, with four SoT. His total of five attempted assists during that period ranks joint-third amongst teammates, just behind Mata (seven) and Pogba (eight). Although Man. United have scored only seven goals in the last six gameweeks, it has not been for want of trying as they have attempted 89 shots and landed 26 SoT. They also registered 16 ‘big chances’ during this period. Their opponents Cardiff have conceded 12 goals over the aforementioned timeframe, with only Southampton (14), Brighton (14) and Huddersfield (18) faring worse. They have allowed opponents 19 ‘big chances’ and only Arsenal (20), Watford (23) and Huddersfield (23) have been more obliging. Our Fix Algorithm predicts a point score of 4.9 for Rashford. 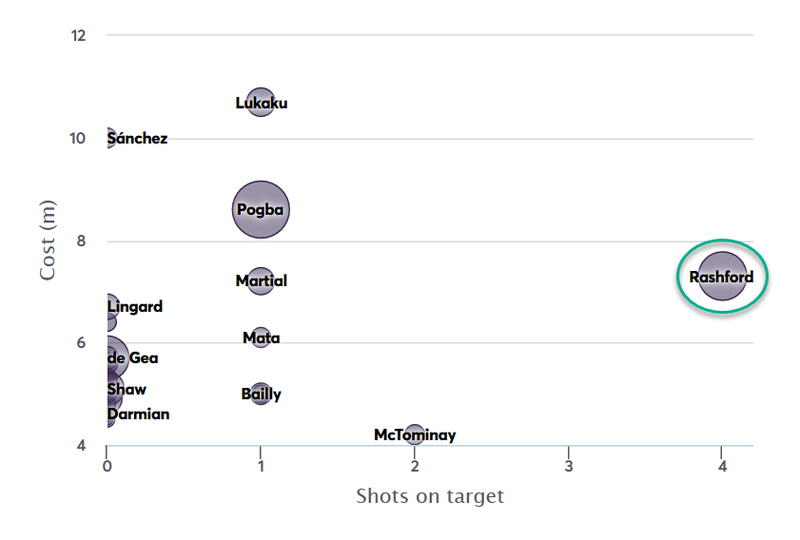 Alexander-Arnold played his part in Liverpool’s remarkable Champions League comeback midweek, setting up Wijnaldum’s first goal before later catching the Barcelona defence napping with his corner which Origi expertly converted. The young right-back has returned 11 FPL assists this season, just one behind teammate Robertson, and five of these have been added to his impressive total in the last five gameweeks. His total of 11 attempted assists during that period ranks joint-first amongst defenders, level with Digne and no defensive rival has created more than his two ‘big chances’. Liverpool have conceded just four goals over the last six gameweeks, keeping three clean sheets. They have allowed opponents just seven ‘big chances’ in those games, the third-lowest in the league. Although Wolves have scored nine goals in that period, they have landed only 22 SoT, with just four teams managing fewer. Our Fix Algorithm projects a 59% chance of a Liverpool clean sheet and a point score of 5.5 for the right-back.