Fans will be back in the stands at Old Trafford and no midfielder has scored more goals than B. Fernandes (nine) on home turf this season. He is also top for shots (63), shots on target (SoT) (24) and chances created (55). Only Sterling, Son (each 12) and Salah (15) have been afforded more ‘big chances’ than his 10. Man. Utd have scored 37 goals at home this season, while only Man. City (38) have been more prolific. The recently crowned Champions are also the only side to have fashioned more ‘big chances’ (57) than the Red Devils (48). Fulham have conceded 24 goals on the road this season, keeping just four clean sheets. They are ranked 11th for SoT conceded (80) and 14th for ‘big chances’ conceded over those matches. Our Fix Algorithm currently projects a point score of 7.7 for B. Fernandes.

Spurs will also welcome back fans in gameweek 37 and no player has scored more goals in home matches this season than Kane (11). He is also top for shots (63) and SoT (27) as per our Stats Sandbox feature while only Bamford (17) and Vardy (18) have been afforded more ‘big chances’ than his 16. Maupay (22) is the only player to have created more chances than his 21 amongst forwards in home matches this year. Spurs have scored 34 goals at home and only Man. Utd (37) and Man. City (38) have found the back of the net more often. Leeds (98), Man. Utd (99), Liverpool (102), Chelsea (103) and Man. City (108) are the only teams to have landed more SoT at home than Spurs’ 96. Villa have conceded 18 goals in away matches this season, keeping eight clean sheets. However, they are ranked 17th for shots conceded (278) and 14th for SoT conceded (89) which indicates they have been a bit lucky. Our Fix Algorithm currently projects a point score of 6.3 for Kane.

The match attending Spurs fans will finally get to see their club hero, Bale, in the flesh for the first time this season, and the Welshman is in good form. He only trails Torres (four) for goals scored (three) amongst midfielders over the last four gameweeks. Salah (eight) is the only midfielder to have landed more SoT than Bale’s seven. He is owned by less than 10% of the top 100k as per our FPL Statistics feature which makes him a great differential option. Spurs have scored seven goals over the last four gameweeks and only Newcastle (eight) and Liverpool (nine) have scored more. Leicester, Palace (each 26), Villa (28) and Liverpool (29) are the only sides to have landed more SoT than Spurs’ 24. Villa have conceded nine goals over the last four gameweeks, no team has conceded more. West Brom (85) are the only side to have conceded more shots than their 82. Our Fix Algorithm currently projects a point score of 5.0 for Bale. 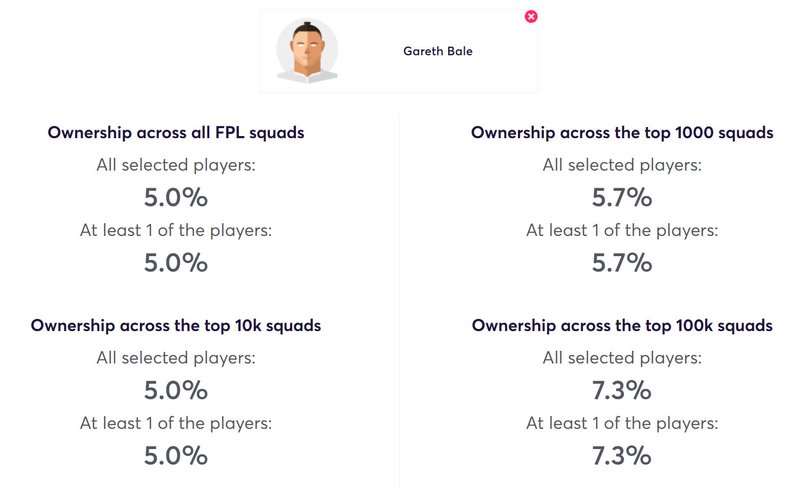