After his assist against Palace, B. Fernandes has now been directly involved in 10 goals since the restart (five goals, five assists); averaging 9.6 points per game (PPG). As the Stats Sandbox shows, the 25-year-old has taken 22 shots trailing only Antonio (26) and Salah (28) amongst Fantasy Premier League (FPL) midfielders. The Portuguese international ranks fourth for shots on target (SoT) (10) and joint-fourth for 'big chances' (five). Only Mané, Grealish (each 18), De Bruyne (23) and Willian (25) can better his 16 attempted assists. Man. Utd have scored 18 goals over the last six gameweeks, more than any other side. The Red Devils only trail Chelsea (38) and Liverpool (39) for SoT (37). West Ham have conceded 28 goals in their 18 away games this season, no team have allowed opponents more ‘big chances’ on their travels than the Hammers’ 52. Our Fix Algorithm currently projects a point score of 6.2 for the Portugal international.

Having scored in each of the last two gameweeks, Jiménez now has four goals in seven games since the restart and is averaging 5.7 PPG as per our Fix Heatmaps feature. The Mexican ranks ninth for goal attempts amongst FPL forwards and only Kane, Giroud (each 10) and Aubameyang (12) have produced more than his eight SoT. Only five forwards have completed more than his 57 final third passes. Wolves have scored six goals over the last six gameweeks and are ranked ninth for shots in the box (SiB) (40) and 11th for ‘big chances’ (10). Palace have the worst defensive record in the league over the same period, no team has conceded more goals (15) or allowed opponents more SoT (35) than the Eagles. They are also bottom for ‘big chances’ conceded (19). Our Fix Algorithm currently projects a point score of 5.0 for Jimenez. 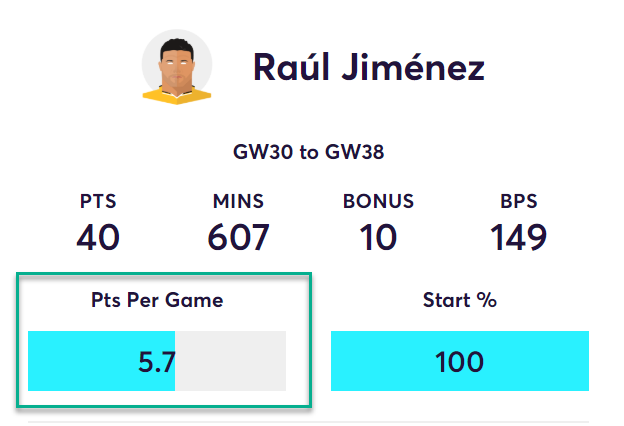 No FPL midfielder has had more 'big chances' than Salah (nine) since the restart, where he has returned an average of 6.8 PPG As the Stats Sandbox graph shows, the Egyptian remains top amongst players in his position for shots, in total (28), from inside the box (23) and on target (15), while only Antonio (5.26) can better his 4.81 expected goals figure (xG). No player, across all positions, can better his 59 touches in the opposition’s box. Liverpool have scored 11 goals over the last six gameweeks and only Arsenal (12), Man. City (17) and Man. Utd (18) have been more prolific. The Merseyside outfit are also top for SiB (76) and SoT (39). Chelsea have conceded nine goals over the last six gameweeks, and only Brighton (12), Bournemouth, Norwich (both 13), Newcastle (14) and Palace (15) have shipped in more. The Blues have kept just one clean sheet on their travels this season and only Bournemouth (34), Everton (35), Villa (35) and Newcastle (37) have shipped more goals on the road than their 33. Our Fix Algorithm currently projects a point score of 7.2 for Salah. 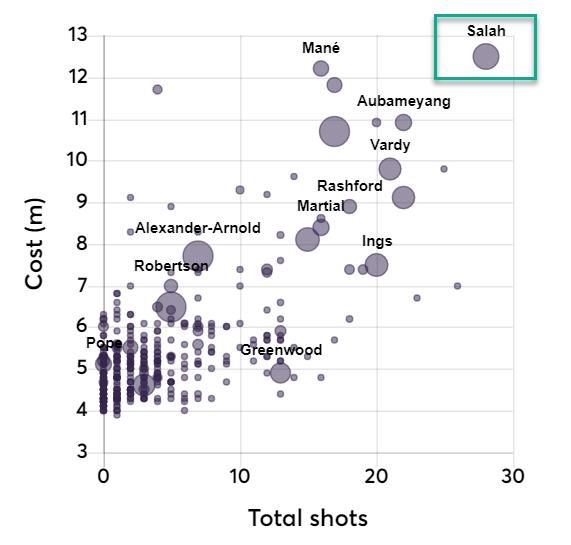 With six goal involvements since the restart (five goals, one assist), no FPL forward has amassed more points than Ings (46) at an average of 6.6 PPG. The Saints striker has taken 19 SiB in that time, with only Giroud (20) and Jesus (23) faring better. Only Vardy (16) has attempted more assists than his 12, while only Firmino (72) and Rashford (120) have completed more than his 69 final third passes. As per our Transfer Stats feature, over 40,000 FPL managers have already brought in the Englishman this week. Southampton have scored eight goals over the last six gameweeks, only eight teams fared better. Their total of 28 SoT is only beaten only by Arsenal (30), Man. City (34), Man. Utd (38), Chelsea (38) and Liverpool (39). Bournemouth have conceded 13 goals over the last six matches and only Newcastle (14) and Palace (15) have conceded more. Newcastle (29), Brighton (30), Norwich (32) and Palace (35) are the only teams to have allowed opponents more SoT than their 28. Our Fix Algorithm currently projects a point score of 5.7 for Ings. 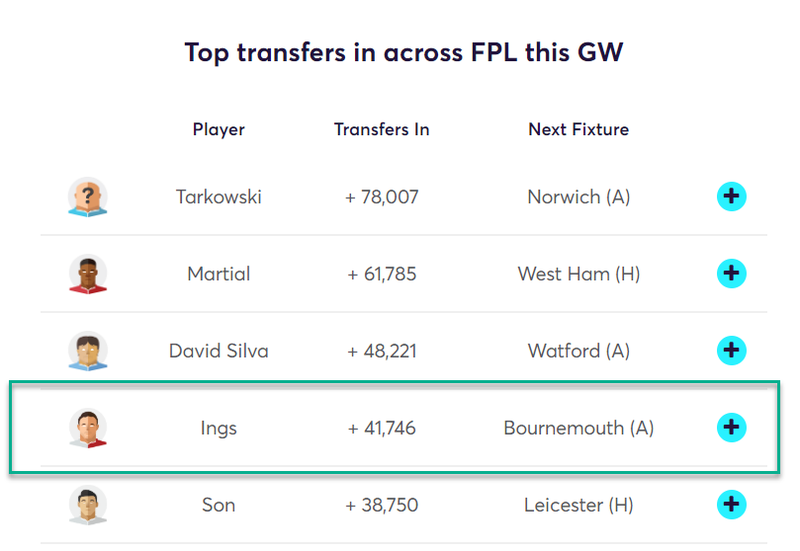 After recording an assist from the bench against Burnley, Doherty has picked up 38 FPL points since the restart and no defender has earned more. Only Robertson, Digne and Azpilicueta (each three) have racked up more than his two assists during that period, and it is only 10 defenders that can better his six attempted assists. No teammate has completed more than his 76 final third passes. Wolves have conceded just four goals over the last six gameweeks and only Burnley (three) were more frugal. They restricted opponents to just 11 SoT and four ‘big chances’, the best defensive numbers in the league. Palace have scored just two goals over the last six gameweeks and only Norwich (one) have fared worse. The Canaries (two) are the only side to have created fewer ‘big chances’ than the Eagles’ five. Our Fix Algorithm currently projects a 60% chance of a Wolves clean sheet and a point score of 5.4 for Doherty.