Kane is yet to score since his return from injury but he did have two goals ruled out for offside against Leeds last gameweek, before striking the crossbar from a free kick. No forward has scored more than his six goals in home matches this calendar year (since gameweek 17), where he has averaged 7.3 points per game (PPG) as per our Fix Heatmaps feature. Only Vardy (12) has racked up more than his eight ‘big chances’ in that time. Spurs have scored 12 goals over the last six gameweeks, no side has scored more. The London side are ranked 11th for ‘big chances’ (12) and 10th for shots on target (SoT) (26) over the aforementioned period. Wolves have conceded nine goals over the last six gameweeks, keeping just two clean sheets. They are ranked sixth for ‘big chances’ conceded (10) and 10th for SoT conceded (24). Our Fix Algorithm currently projects a point score of 6.4 for Kane. 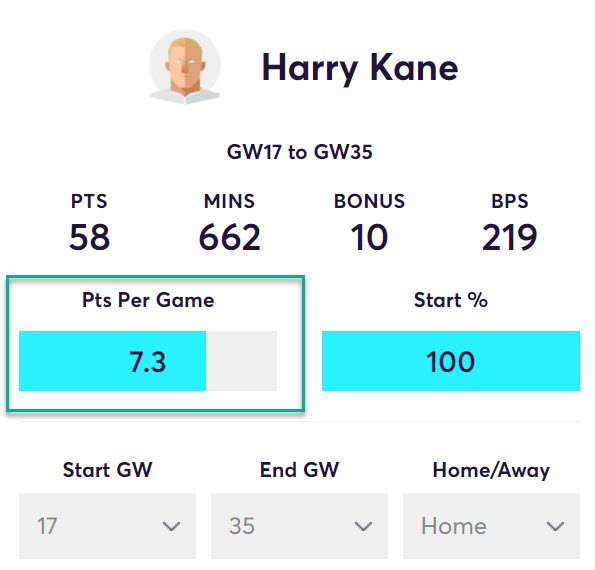 With goals in three of his last five matches, Salah has averaged 6.2 points per game (PPG). During that period (GW30 to 35), the Egyptian ranks top amongst midfielders for touches in the opposition’s box (44) and is joint-first with Greenwood for total shots (21) and shots in the box (SiB) (18). Only Wood (eight) has been afforded more than his seven ‘big chances’, across all positions. The Egyptian is projected to go up in price tonight as per our Price Predictor feature. Liverpool have scored nine goals over the last six gameweeks, only Leeds (110) have taken more shots than their 92 over that period. No side landed more SoT than their 39. West Brom have conceded 11 goals over the last six gameweeks, keeping just one clean sheet. Only Palace, Sheff. Utd and Leicester (all 12) shipped more over that period and no side allowed opponents more SoT (46) than the Baggies. Our Fix Algorithm currently projects a point score of 6.1 for the Egyptian.

After scoring for a second consecutive match, Calvert-Lewin has averaged 6.3 PPG since his return from injury in gameweek 33. Iheanacho (26) and Wood (32) are the only forwards to have earned more points than the Englishman (19) in that time, while only Wilson (four) and Wood (five) can better his three ‘big chances’. Only Welbeck, Werner (each six) and Iheanacho (11) have provided more than his four attempted assists. He is the fourth most transferred in player this week as per our Transfer Stats feature. Everton have scored six goals over as many gameweeks and are ranked seventh for ‘big chances’ (13). Sheff. Utd have conceded 12 goals over the same period, no side has shipped more. Only West Brom (46) have allowed opponents more SoT than the Blades (39) while only Southampton (17) and Palace (18) have allowed more ‘big chances’ than their 16. Our Fix Algorithm currently projects a point score of 4.7 for Calvert-Lewin. 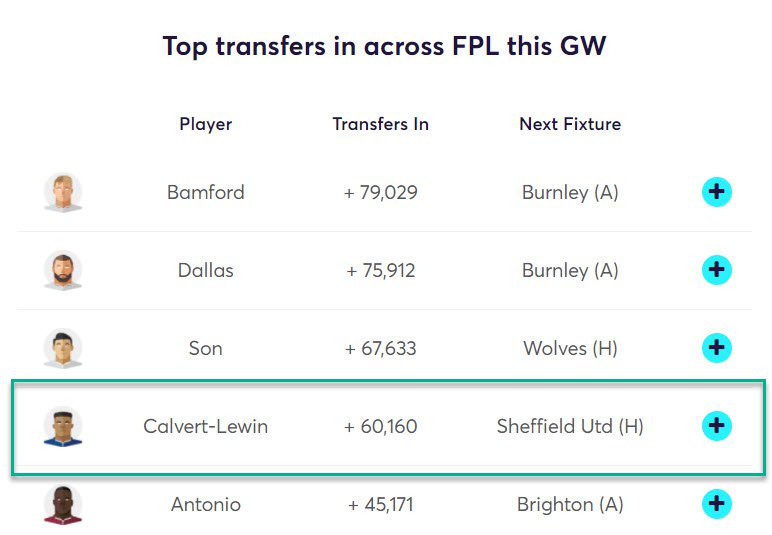 Raphinha made his return last gameweek after three matches on the sidelines, coming off the bench to seal the victory over Spurs with a late assist. As the Stats Sandbox shows, since the start of 2021 (gameweek 17), only Rashford and Bernardo Silva (each seven) have provided more assists than the Brazilian (six) amongst midfielders. His total of nine ‘big chances’ created in that time ranks joint-first with B. Fernandes and Son. Leeds have scored eight goals over the last six gameweeks and are ranked 11th for ‘big chances’ (12) and eighth for SoT (27). Burnley have conceded 10 goals over the same period, keeping just two clean sheets. Only West Brom (108) and Newcastle (117) have allowed opponents more shots (106) than the Clarets over the last six gameweeks. Our Fix Algorithm currently projects a point score of 3.9 for Raphinha.

With an assist and three clean sheets in his last five matches, Digne has averaged 5.2 PPG. The Frenchman has created two ‘big chances’ in that time, which only trails C. Townsend (three) amongst defenders. Meanwhile, Targett (31), Shaw (32) and Alexander-Arnold (34) are the only defenders to have attempted more than his 27 crosses. Everton have conceded just five goals over the last six gameweeks, keeping three clean sheets. Only Liverpool (three) have conceded fewer. Only Chelsea (19), Man. City (16) and Arsenal (13) have allowed opponents fewer SoT than the Toffees (20). Sheff. Utd have scored just two goals over the last six gameweeks, the fewest in the league. They are also bottom for ‘big chances’ (four) and SoT (nine). Our Fix Algorithm currently projects a point score of 4.8 for the left-back.