Kane and Mitchell are joint-first of the Custom Stats xFPLtable for gameweek 36 with a score of 10.0 each. Kane led the way for shots (seven), shots on target (SoT) (five) and ‘big chances’ (three) this week and was unlucky not to register a bigger FPL haul. Mitchell's only chance that he created was converted and the left-back also scored from his only shot. The Liverpool duo of Alexander-Arnold and Thiago were joint-first for chances created (five). The right-back marginally edges the Spaniard for xFPL score, 7.1 to 4.8. Meanwhile, Hat-trick hero Torres registered an xFPL score of only 9.8, as the 21-year old scored three of his four shots in the box (SiB) and attempted just one assist.

Jota has been ruled out for the remaining league fixtures by Klopp and his replacement options are analysed using the Fix Comparison Matrix, for the last four gameweeks - and Raphinha is not included because of limited minutes. Harrison leads the way for FPL points (23), FPL assists (two) and chances created (nine). However, he has landed just three SoT across four matches and has not been afforded a single ‘big chance’. Greenwood is second for FPL points (22) and tops the comparison for shots (12) and SoT (seven). Willock has been on fire of late with three goals in his last four matches. The numbers are not impressive though, with just four SoT. He does look a better option than Saint-Maximin though, who has managed just two SoT but has created four chances to Willock’s zero. Mount is also an excellent option ahead of Chelsea’s must-win games. The 22-year old is second for shots (nine), SoT (six) and attempted assists (eight). 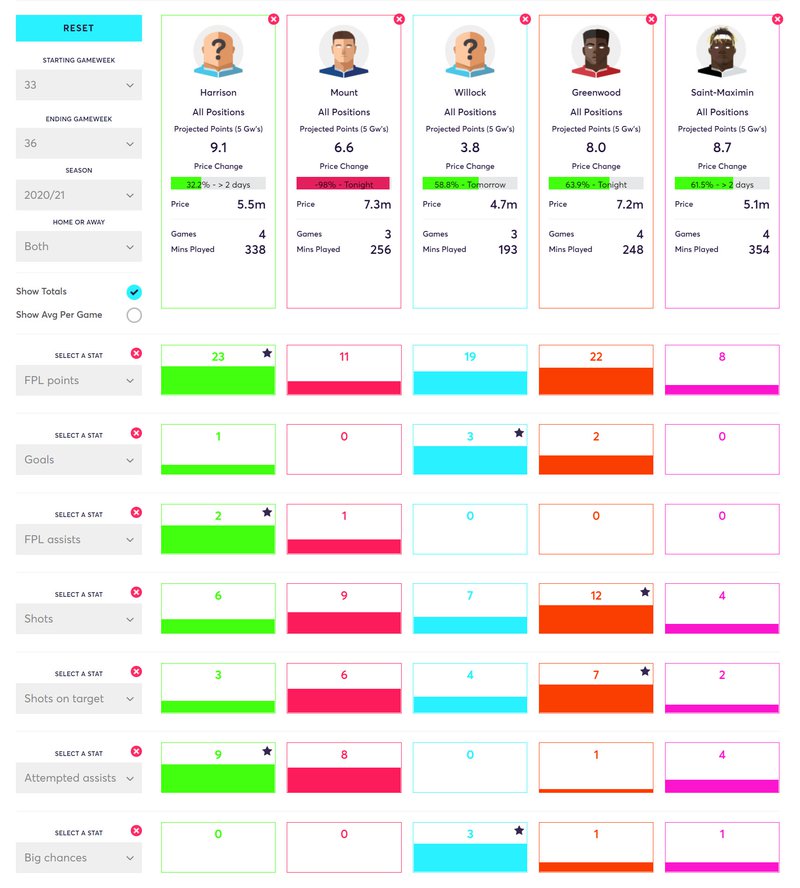 The sixth-highest scoring midfielder in the game with 152 points, Harrison has gone under-the-radar for most FPL managers, and has never achieved ownership greater than 5% all season. His numbers are compared to the more popular Raphinha for the last 10 gameweeks using our Fix Heatmaps feature. More attention is paid to averages since Raphinha missed three games due to injury. The pair are neck and neck for expected goals (xG) (0.23 to 0.24), while Raphinha shoots more (2.23 to 1.63). Harrison lands a great number of SoT (0.64 to 0.88), however, Raphinha takes more SiB (1.76 vs 1.38). The Brazilian also marginally wins for expected assists (0.33 to 0.26), attempted assists (2.23 to 2.13) and ‘big chances’ created (0.48 to 0.38). There is really not much to split them based on these numbers, and both look like excellent options, with Harrison’s fitness perhaps tilting it slightly in his favour.