2. Martial vs B. Fernandes

Martial has been one of the league’s form players since the restart and is tied with B. Fernandes for the most FPL points (67) over that period. Using the Fix Comparison Matrix, the two are compared, to give an insight into who might be the better Captaincy option for their home fixture against West Ham in gameweek 37. Martial beats B. Fernandes for goals (six vs five) but the Portuguese wins out on expected goals (xG) (2.98 vs 3.52) which is partially due to penalty duties where the xG figure is naturally higher. The Frenchman has taken 12 SiB to B. Fernandes’ eight even though the latter has landed more SoT (nine vs 10). The Portuguese man has attempted 16 assists to Martial’s eight, but the quality of these chances created have been inferior to the ones created by Martial as evidenced by the expected assists (xA) stat (1.85 vs 1.56). If Man. Utd stick to their policy of rotating penalty takers, Rashford should take their next spot kick which dents B. Fernandes’ appeal slightly as well.

Vardy leads the Premier League goal scoring charts with 23 goals but the chasing pack of Aubameyang , Ings (both on 20) and Salah (19) will all be gunning for the Golden Boot over the next two gameweeks. Their numbers are compared for the last four gameweeks using the Fix Comparison Matrix. Vardy leads the way for goals (four), FPL points (34) and attempted assists (nine) but faces Spurs and Man. Utd in his next two games. Ings has scored two goals from just three SoT in the last four matches but has the second highest projections (11.0) due to his favourable upcoming fixtures against Bournemouth and Sheff. Utd. Aubameyang’s numbers are poor, the Gabonese has attempted just six shots across the last four matches and was afforded just one ‘big chance’. Salah has recorded a whopping 12 SoT over that period, which is as many as the other three combined. He also leads the way for ‘big chances’ (eight). The Egyptian looks determined to win the Golden Boot for a third season running but has been wasteful with his finishing of late, so the visit of a less than sturdy Chelsea defence next Wednesday poses a great opportunity for Salah. 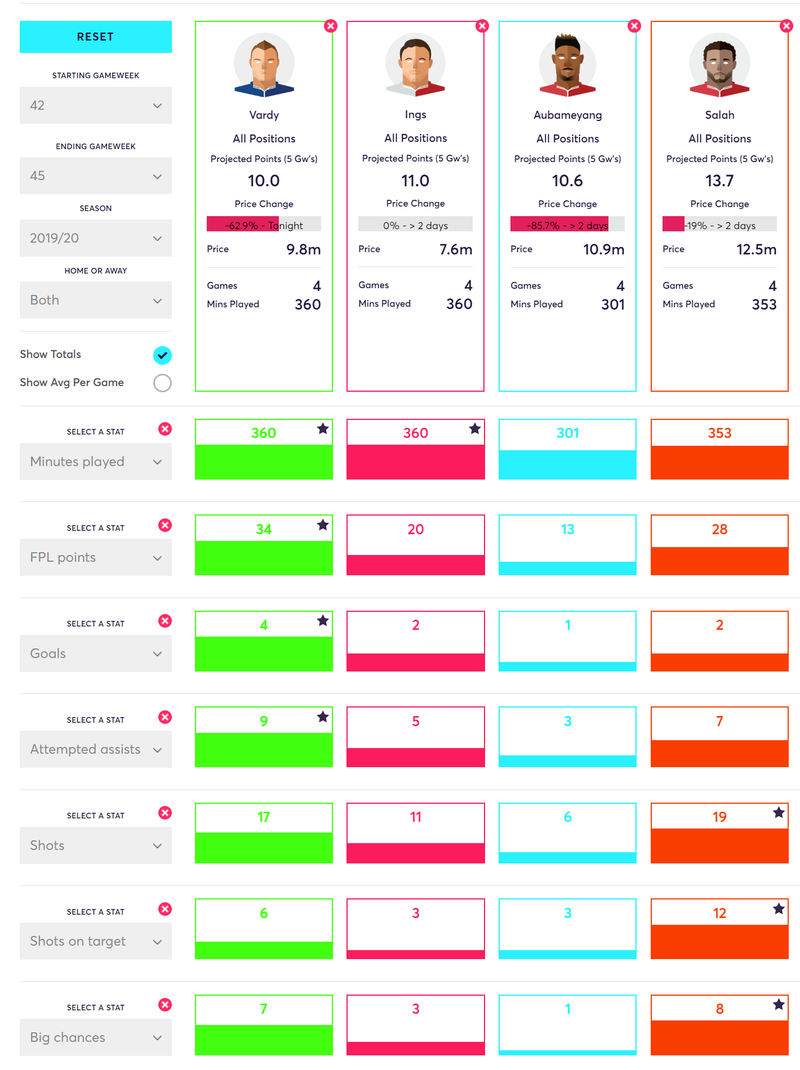