Fantasy Premier League’s top point scorer with 221 points, B. Fernandes has scored 16 goals this season, only Salah (20) has scored more amongst midfielders. No midfielder has taken more shots (104) or landed more shots on target (45) this campaign. The Portuguese is also top for chances created (89) and ‘big chances’ created (19). Man. Utd have scored 63 goals this season, only Man. City (71) have been more prolific. Their total of 85 ‘big chances’ is bettered only by Liverpool (90) and Man. City (97). Villa have conceded 38 goals this season while only Burnley (164), Newcastle (172), Leeds (183), Sheff. Utd (184) and West Brom (209) have allowed opponents more SoT than their 155. Leicester have conceded 39 goals and are ranked sixth for SoT conceded (119) and eighth for ‘big chances’ conceded (57). Their third opponents Liverpool have also conceded 39 goals and kept just nine clean sheets. The Merseyside outfit are ranked a lowly 14th for ‘big chances’ (68) conceded this season. Our Fix Algorithm currently projects a mammoth point score of 18.2 for B. Fernandes.

With Man. Utd having a triple gameweek fixture, the differential pick has to be Greenwood. Over their last five matches, he leads the way amongst Man. Utd players for for ‘big chances’ (four), shots in the box (SiB) (17), and SoT (10). The fact that he is just 19 years old bodes well for his minutes given the short turnaround between matches and offers an explosive differential option to the more popular B. Fernandes with just 14.4% ownership in the top 100k as per our FPL Statistics feature. Man. Utd have scored eight goals over the last six gameweeks and have created 13 ‘big chances’ over that period while only West Ham (14), Liverpool (16) and Chelsea (17) have created more. Villa have conceded 10 goals over the aforementioned, keeping no clean sheets. Only Newcastle (11) and West Ham (12) have shipped more. Only Sheff. Utd (31), Newcastle (33) and West Brom (39) have allowed opponents more SoT than their 30. Leicester have conceded seven goals over the last six gameweeks, keeping just one clean sheet. Only Man. Utd (12) and Man. City (11) allowed opponents fewer SoT than the Foxes’ 14 over that period. Liverpool have conceded just three goals over the last six gameweeks, the fewest in the league. They are ranked eighth for ‘big chances’ conceded (11) which indicates they have been a bit fortunate. Our Fix Algorithm currently projects a point score of 11.8 for the 19-year old. 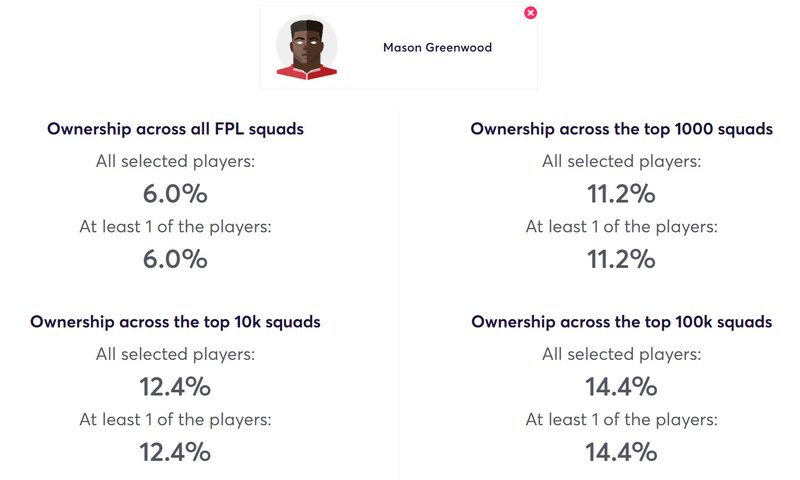