Caveat: The gameweeks added to Fantasy Premier League (FPL) for the re-launch are listed as GW34+, GW35+ and are referred to as GW43, GW44 respectively throughout the Fix website.

Salah showed his appetite for the golden boot with an 18 point haul against Brighton, his biggest score of the season so far. Since the restart, only Foden, B. Fernandes, Martial and Willian (all four) have scored more goals than the Egyptian’s three and he leads the way amongst midfielders for shots in the box (SiB) (15) and ‘big chances’ (five). Only Willian (10) has landed more shots on target (SoT) than his nine. Liverpool have scored nine goals since the restart, only Newcastle, Arsenal (both 10), Man. Utd, Chelsea (both 12) and Man. City (18) have been more prolific. Their total of 11 ‘big chances’ is bettered only by Arsenal, Man. Utd (both 12), Chelsea (17) and Man. City (22). Burnley have conceded just six goals since the restart but the underlying numbers show they have been a bit lucky. No team has allowed opponents more shots than the Clarets’ 77 and only Sheff. Utd and Palace (both 13) have allowed opponents more ‘big chances’ than their 11. Our Fix Algorithm projects a point score of 7.4 for the Egyptian.

With three goals in his last two games, Vardy looks to have regained the form of early season and no forward has scored more goals (three) since the restart. His total of 10 SiB is bettered only by Giroud (11), Jesus and Aubameyang (both 13) amongst forwards and he is top for ‘big chances’ (four). He is the fourth most transferred in player this week as per our Transfer Stats feature. The Foxes are still in the hunt for a Champions League spot and have scored six goals in their five matches. They have created nine ‘big chances’ with only seven teams managing more. Bournemouth have conceded 12 goals since the restart, more than any other team in the division. They have allowed opponents 21 SoT and 10 ‘big chances’ in their four matches. Our Fix Algorithm projects a point score of 6.7 for the striker. 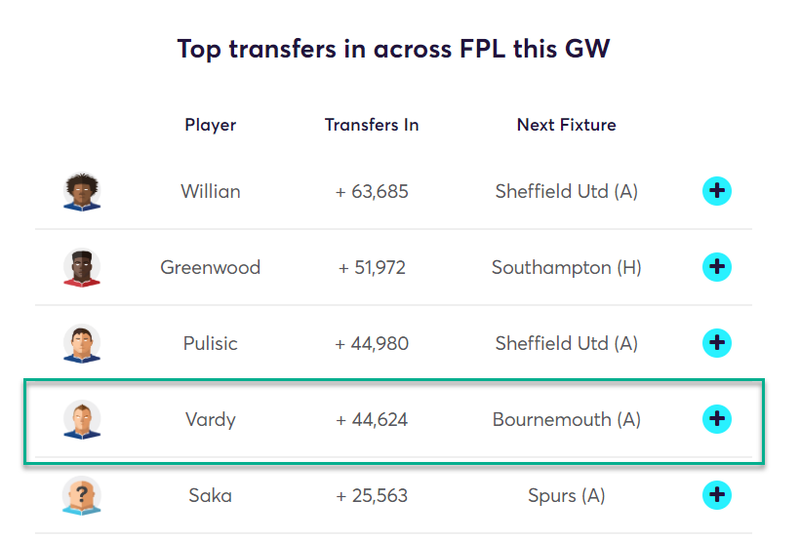 Sterling made an impact off the bench against Newcastle with a 10-point haul (one goal, one assist) and is well placed to return to the Man. City starting lineup against Brighton. Only Foden, B. Fernandes, Martial and Willian (all four) have scored more goals than his three and only Salah (five) has been afforded more ‘big chances’ than his four. As the Stats Sandbox shows, his total of 10 SiB is bettered only by Mahrez (11), Antonio (14) and Salah (15) amongst midfielders. Man. City have scored 18 goals in their six games since the restart, the highest in the league. They are also top for SiB (76), SoT (41) and ‘big chances’ (22). Brighton have conceded seven goals since the restart, only seven teams have been more porous. Only Palace (49) and Burnley (50) have allowed opponents more SiB than their 46. Our Fix Algorithm projects a point score of 3.6 for the Englishman.