Caveat: This blog was written before the Triple Gameweek 35 announement for Man. United. Opposition data for Liverpool is therefore not included.

B. Fernandes has registered just two goal involvements in his last six matches (one goal, one assist), averaging 4.2 points per game (PPG) as per our Fix Heatmaps feature. Only Greenwood (21) and Salah (23) have fired more than his 19 shots amongst midfielders in that time (GW27-33), while only McNeil (15) can better his 13 attempted assists. Only Havertz, Lingard (each five), Salah and Mané (each six) have had more than his four ‘big chances’. Man. Utd have scored eight goals over the last six gameweeks, despite playing only four matches. They have created 13 ‘big chances’ over that period and only West Ham (14), Liverpool (16) and Chelsea (17) have created more. Villa have conceded 10 goals over the same period, keeping no clean sheets. Only Newcastle (11) and West Ham (12) have conceded more. Only Sheff. Utd (31), Newcastle (33) and West Brom (39) have allowed opponents more SoT than the Villans (30). Leicester have conceded seven goals over the last six gameweeks, keeping just one clean sheet. Only Man. Utd (12) and Man. City (11) allowed opponents fewer SoT than the Foxes’ 14 over that period. Our Fix Algorithm currently projects a point score of 12.0 for B. Fernandes. 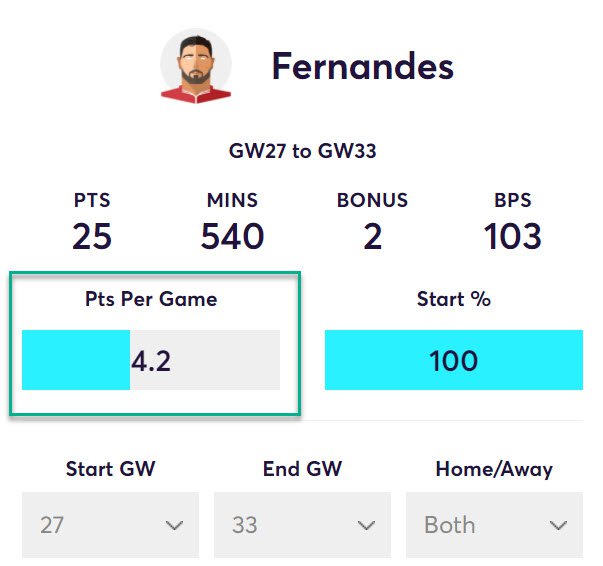 Salah has returned to form with three goals in his last four matches, where he has averaged 6.3 PPG. As the Stats Sandbox shows, during that spell (GW30-33), no midfielder has fired as many shots (17), while only Jota, Lingard (each seven), Pereira (eight) and Greenwood (nine) have landed more than his six shots on target (SoT). The Egyptian king ranks top with totals of six ‘big chances’ and 35 touches in the opposition’s box. Liverpool have scored seven goals over the last six gameweeks, despite playing just four matches. No team has landed more SoT than the Reds (33) over that period while only Chelsea (17) have created more ‘big chances’ than their 16. Southampton have conceded eight goals over the last six gameweeks, keeping no clean sheets. The Saints are ranked 11th for SoT conceded (23) and 12th for ‘big chances’ conceded (12) over that period. Our Fix Algorithm currently projects a point score of 6.3 for the Egyptian.

Iheanacho has extended his hot streak with four goals and two assists over the last four gameweeks, averaging 9.0 PPG. No player in any position has taken as many shots, in total (19) or on target (nine), while only Jota can equal his 12 shots in the box (SiB). His 2.83 expected goals (xG) figure can only be bettered by Wood, with 2.87. The Nigerian is the most owned player in the top 1000 as per our FPL Statistics feature with 95.5% ownership. Newcastle have conceded 11 goals over the last six gameweeks and only West Ham (12) have been more porous. No team has allowed opponents more shots (103) than the Magpies over that period. Their second opponents Man. Utd have conceded just three goals over the last six gameweeks, keeping one clean sheet. However, the Red Devils have conceded just 12 SoT over that period, only Man. City (11) conceded fewer. Our Fix Algorithm currently projects a point score of 8.1 for Iheanacho. 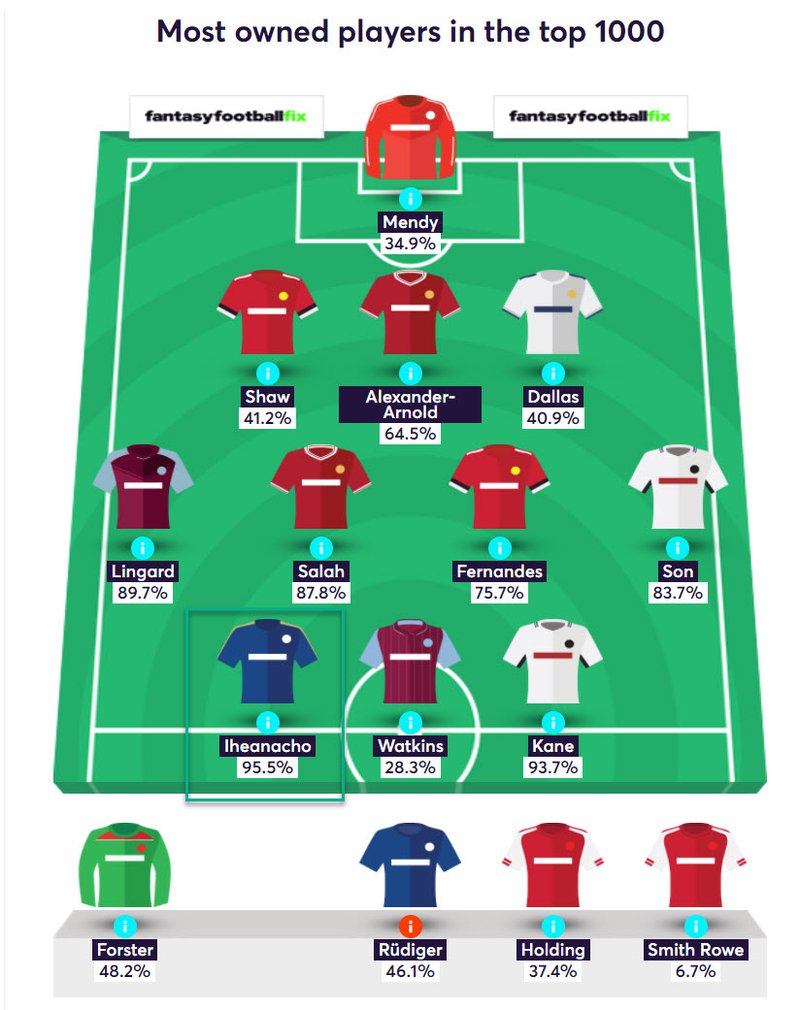 Having notched eight goals and three assists in 14 away matches this season, Calvert-Lewin has averaged 5.6 PPG on the road. The 24-year-old has landed 21 SoT away from home, only Kane (22) has managed more amongst forwards. Meanwhile, no player across all positions has recorded as many as his 15 ‘big chances’. The Toffees are ranked third on our Fixture Analyser for attack difficulty over the next three gameweeks which makes the striker a great buy. Everton have scored five goals over the last six gameweeks and are ranked 12th for shots (65) and eighth for ‘big chances’ (11). Their opponents defensive numbers present plenty of reason for optimism. No team has conceded more goals than West Ham’s 12 over the last six gameweeks while only Palace (15) have conceded more ‘big chances’ than the Hammers (14). Villa have conceded 10 goals over the aforementioned period and only Newcastle (11) and West Ham (12) have conceded more. Meanwhile, West Ham (92), West Brom (93), Leeds (101) and Newcastle (103) are the only teams to have allowed opponents more shots than Villa (86). Our Fix Algorithm currently projects a point score of 7.8 for Calvert-Lewin.

With a goal and three clean sheets over his last six matches, Shaw has averaged 6.0 PPG. During that period, between gameweeks 27 and 33, no defender has provided as many as his 16 attempted assists, a total only matched by Alexander-Arnold. His 18 touches in the opposition’s box also ranks top amongst players in his position. The left-back is rated as 100% to start as per our Predicted Lineups feature. Man. Utd have conceded just three goals over the last six gameweeks, no team has conceded fewer. Only Chelea (three) and Man. City (two) have allowed opponents fewer ‘big chances’ than the Red Devils’ six. Villa have scored nine goals over the same period and only West Brom (11), Spurs and West Ham (13) have scored more. Their total of 76 shots is bettered only by Liverpool (78), Brighton and Arsenal (each 84). Their second opponents Leicester are ranked 11th for SiB (83) and eighth for ‘big chances’ (11). Our Fix Algorithm currently projects a point score of 7.6 for the left-back. 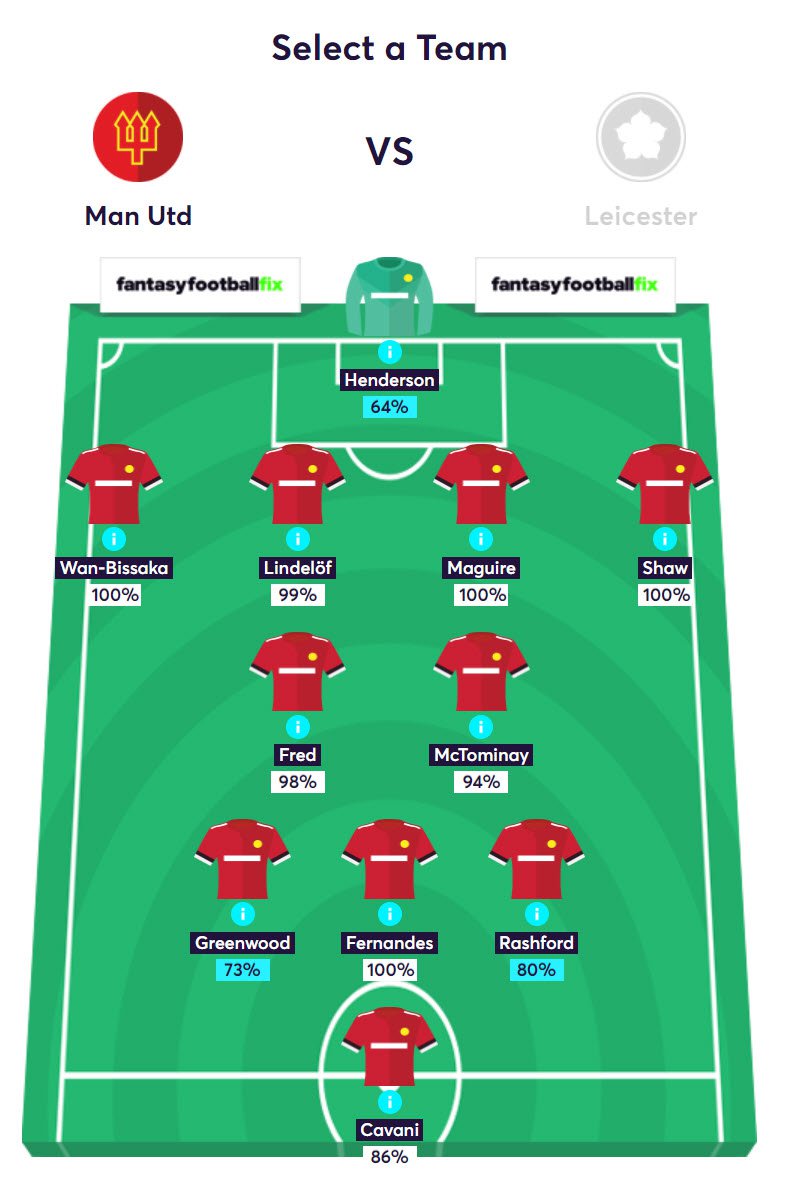