Caveat: The gameweeks added to Fantasy Premier League (FPL) for the re-launch are listed as GW33+, GW34+ and are referred to as GW42, GW43 respectively throughout the Fix website.

This blog was written prior to the match on 05/07/2020, and at the time of writing De Bruyne had a projected point score of 6.1 (the Fix algorithm takes into account benched players as rotation risks). Time to build a Pep algorithm.

De Bruyne has been in scintillating form since the restart with three goals in Man. City’s four matches. Only Martial, Willian and B. Fernandes (all four) have scored more amongst midfielders. His total of two assists is bettered only by Pulisic and Saint-Maximin (both three). Only Willian, Grealish (both 11) and Hourihane (13) have created more chances than his 10, but as has been the case all season the Belgian leads the way for ‘big chances’ created (four). Man. City have scored 13 goals since the restart, the highest in the league. They lead the way for ‘big chances’ (13) and only Chelsea (45) have taken more shots in the box (SiB) than Man. City’s 41. Their opponents Newcastle have also been in good form since the restart, conceding just two goals and four shots on target (SoT) in their three league games. However, they have played obliging opposition so far in Sheff. Utd, Villa and Bournemouth which is a totally different kettle of fish compared to playing last year’s Champions. Our Fix Algorithm projects a point score of 6.1 for the Belgian.

B. Fernandes registered his second double digit haul since the restart with a 15-point Fantasy Premier League (FPL) score against Bournemouth (one goal, two assists). Over the last four gameweeks no midfielder has scored more goals (four), taken more shots (14) or landed more SoT than the Portuguese’s eight. Only De Bruyne (10), Willian, Grealish (both 11) and Hourihane have created more chances than his nine. He is now the second most owned player in the top 1000 with 87.3% ownership as per our FPL Statistics feature. Man. Utd have scored 12 goals since the restart with only Man. City (13) faring better. They lead the way for SoT (28) and trail only Man. City (13) for ‘big chances’ (12). Villa have shown some defensive resilience since the restart with just four goals conceded in as many games. They have conceded just 11 SoT and three ‘big chances’ but given the Red Devils’ attacking form these numbers mean very little. Our Fix Algorithm projects a point score of 5.9 for B. Fernandes. 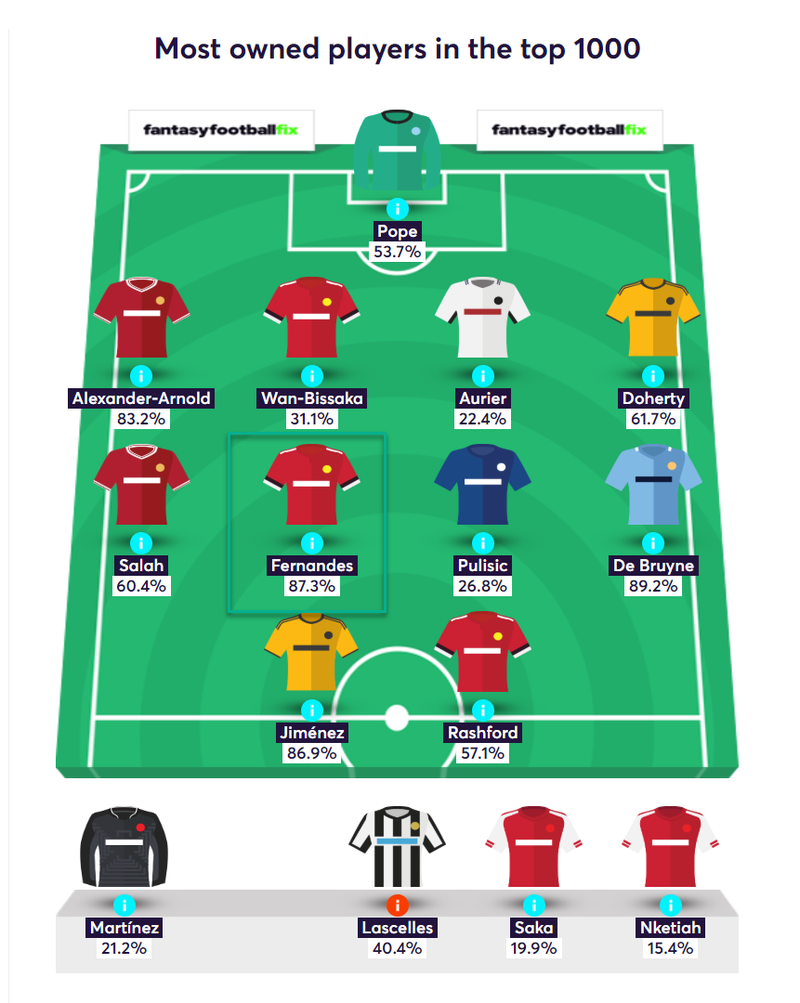 Kane has shown strong form since the restart with two goals in Spurs’ three matches, only Ings and Greenwood (both three) have been more prolific amongst forwards. His total of 10 shots is bettered only by Giroud (11) and Aubameyang (17) who have both played one and two more games respectively. As the Stats Sandbox shows, he is still joint-top for ‘big chances’ amongst forwards (four). His total of four SoT is beaten only by Calvert-Lewin (five), Giroud (six) and Aubameyang (10). Spurs have scored only four goals in the three games since the restart, creating a chance every 8.4 minutes. Only eight teams have created chances more frequently. Their opponents Bournemouth have the worst defensive record in the league since the restart, conceding 12 goals. No team has conceded more ‘big chances’ than the Cherries’ 10. Our Fix Algorithm projects a point score of 5.1 for Kane.