Kane made his return to action in the EFL Cup final, after an ankle injury saw him miss the 2-1 win over Southampton in gameweek 32. In his last four gameweeks (gameweeks 29 to 32), the Englishman managed to net five goals, while posting league-best totals of 19 shots, eight shots on target (SoT) and six ‘big chances’. Only Lingard (45) amassed more than his 34 points in that time, which was an average of 8.5 points per game (PPG). He is the third most transferred in player this week as per our Transfer Stats feature.  Spurs have scored 10 goals over the last six gameweeks, only West Ham (11) and Leicester (12) have been more prolific. The London side are ranked 12th for shots (62) and 11th for ‘big chances’ (10) over that period. Sheff. Utd’s numbers offer plenty of reason for optimism, only West Ham (12) have conceded more goals than the Blades (11) and no team has conceded more ‘big chances’ (18). Only West Ham, Leeds and Newcastle (all 99) have allowed more shots than the Blades’ 83. Our Fix Algorithm currently projects a point score of 6.9 for Kane. 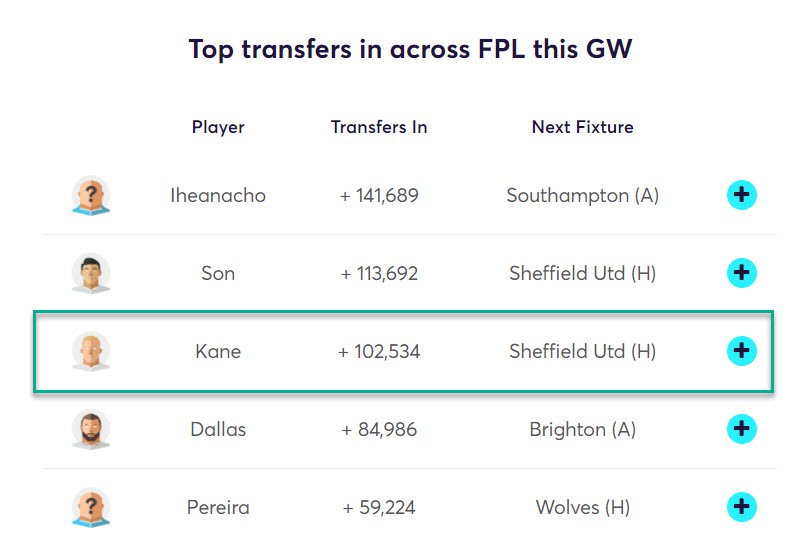 B. Fernandes has amassed just one goal and one assist since gameweek 26, averaging 3.9 PPG. However, no midfielder has provided more than his 18 attempted assists in that time, while only Mount (24), Greenwood (25) and Salah (27) have fired more than his 21 shots. Havertz (five), Lingard (six), Mané (seven) and Salah (eight) are the only players to have racked up more than his four ‘big chances’. The Portuguese is owned by 81.6% of the top 1000 as per our FPL Statistics feature. Man. Utd have scored nine goals over the last six gameweeks, only West Brom, Spurs, Burnley (all 10), West Ham (11) and Leicester (12) have scored more. Their total of 30 SoT is only bettered by Chelsea (34) and Liverpool (37) while only Leicester (16) and Liverpool (17) have created more ‘big chances’ than the Red Devils’ 15. Liverpool have conceded just three goals over the last six, keeping two clean sheets but they have been riding their luck a bit. The Merseyside outfit are ranked just ninth for SoT conceded (21) and ‘big chances’ conceded (11). Our Fix Algorithm currently projects a point score of 6.6 for B. Fernandes. 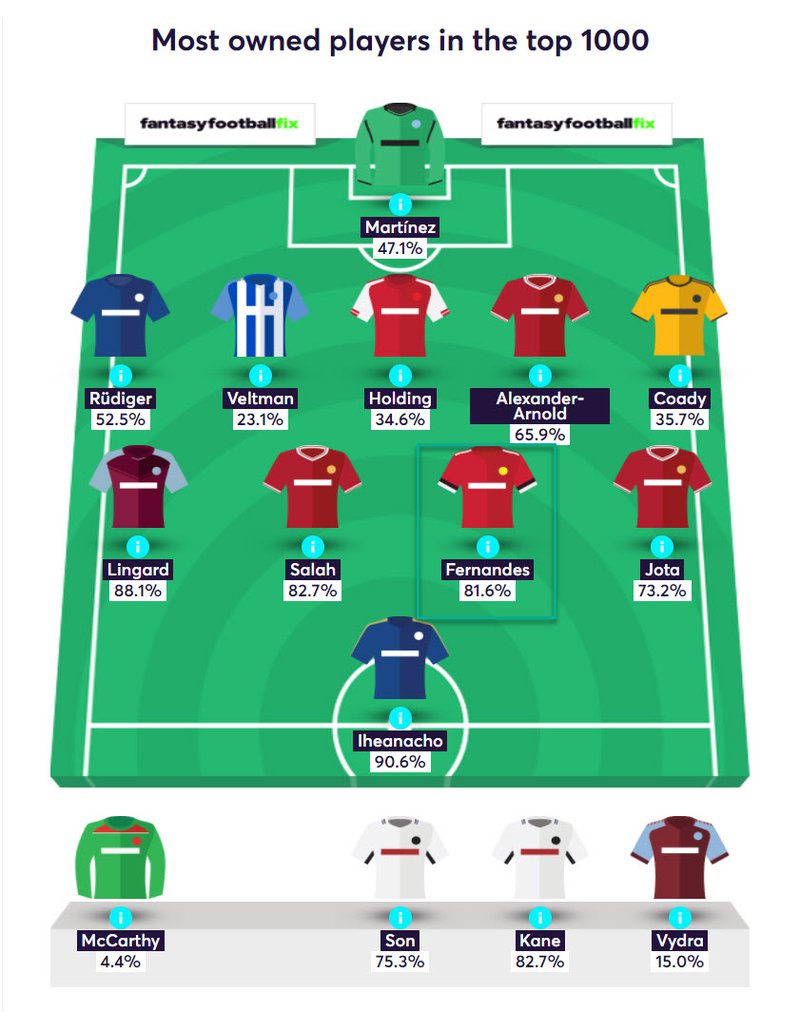 With five goals and two assists in the last five gameweeks, no player has amassed as many FPL points as Lingard (47). Just four midfielders have taken more than his 14 shots and only Greenwood (nine) has landed more than his eight SoT. His 2.17 expected goals (xG) figure trails only Jota (2.26), Greenwood (2.53), M. Pereira (2.55) and Salah (3.35). The Hammers are ranked second on our Fixture Analyzer for the rest of the season so it is a great time to bring him in. West Ham have scored 11 goals over the last six gameweeks, only Leicester have found the back of the net more often. The Hammers are ranked eighth for shots in the box (SiB) (44) while only Chelsea (14), Man. Utd, Newcastle (each 15), Leicester (16) and Liverpool (17) have created more ‘big chances’ than their 12. Burnley have conceded nine goals over the aforementioned period, keeping just one clean sheet. Only West Brom, Newcastle (each 15) and Sheff. Utd (18) have allowed opponents more ‘big chances’ than the Clarets’ 14. Our Fix Algorithm currently projects a point score of 5.7 for Lingard.

After his hat-trick in the 4-0 thrashing of Wolves, Wood has now been directly involved in nine goals across his last six gameweeks (six goals, three assists). As the Stats Sandbox shows, during that period (gameweeks 27 to 33), no forward can better his 14 SoT or his 17 SiB, while only Kane and Iheanacho can equal his seven big chances. No player in his position has taken more than his 42 touches in the opposition’s box. Burnley have scored 10 goals over the last six gameweeks, only West Ham (11) and Leicester (12) have scored more. The Clarets are ranked eighth for shots (69) and SoT (24) over this period. West Ham have conceded more goals than any other team (12) over the last six gameweeks, keeping no clean sheets. No team has conceded more shots (99) while only Leeds, West Brom (each 33) and Newcastle (35) have allowed opponents more SoT than the Hammers’ 31. Our Fix Algorithm currently projects a point score of 4.6 for Wood.

Reguilón bagged his fifth assist of the season against Southampton in his last league outing and only four defenders have managed more. Amongst those who have played over 1000 minutes, his average of 0.25 assists per 90 minutes ranks only behind Cresswell (0.33) and Digne (0.34). Meanwhile, only Son (117) has attempted more than his 54 crosses amongst teammates. Spurs have conceded 10 goals over the last six gameweeks, keeping just one clean sheet. They are ranked 14th for SoT conceded (29) and 17th for ‘big chances’ over this period. Sheff. Utd’s attacking numbers have been abysmal, the Blades are bottom of the league for goals scored (two), SoT (eight) and ‘big chances’ (three) over the last six gameweeks. Our Fix Algorithm currently projects a 60% chance of a Spurs clean sheet and a point score of 4.7 for the Spaniard.