Caveat : The blog was written prior to the Chelsea vs Brighton game
Caveat : The Captaincy picks are in the below format -

Even though Hazard has only scored one goal in the last six gameweeks with six shots in the box (SiB) and nine chances created, his total of 24 Fantasy Premier League (FPL) involvements (13 goals and 11 assists) only trails Salah (27) and Sterling (28) amongst midfielders. The Belgian has been involved in 58% of Chelsea’s goals when on the pitch, and in almost half of their total goals. The Blues have only scored seven goals in the last six gameweeks but it has not been for want of trying. Their 91 shots over that period is the third-highest in the league, with only Newcastle (93) and Leicester (105) attempting more, and both teams having played an extra game. They have created a chance every 5.3 minutes, second only to Man. City’s 4.4. West Ham lost their last game by two goals to Everton and have conceded nine goals in the last six gameweeks, keeping only one clean sheet. Over that period, no team has allowed opponents more ‘big chances’ than their 23. Our Fix Algorithm backs Hazard as the standout captain option this week with a projected score of 6.0.

Arguably the league’s form striker, Vardy has scored five goals in the last six gameweeks, more than any other striker. His 13 SiB is sixth-highest amongst forwards, and only Lukaku (eight) and Rondon (10) have landed more shots on target (SoT) than his seven. Leicester have scored 11 goals over the same period, with only Arsenal (12), Watford (12) and Liverpool (13) more prolific. No team has attempted more shots than the Foxes’ 105. Huddersfield were officially relegated after their defeat to Palace in gameweek 32, and the Terriers have conceded 11 goals over the last six gameweeks, allowing opponents 93 shots. Huddersfield have also allowed 29 SoT, with just three teams faring worse. Our Fix Algorithm projects a point score of 5.1 for the pacy striker. 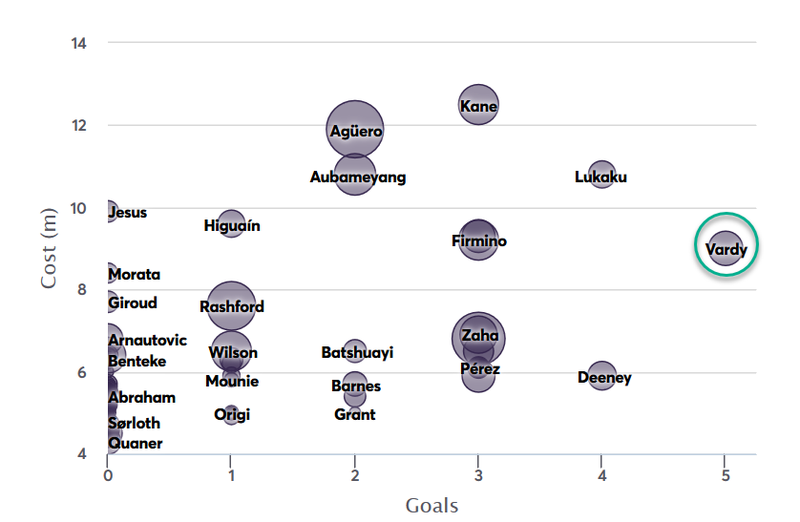 Bournemouth are back on home turf as they take on the Clarets in gameweek 33, and they will be looking to their diminutive Scottish winger to provide a spark after creating 11 chances in the last six gameweeks, sixth-highest amongst midfielders. As the Custom Stats table shows, no midfielder created more ‘big chances’ than his four over the aforementioned period. He is by far Bournemouth’s most creative midfielder over those matches, as the next best Gosling has created only two chances. The Cherries have scored seven goals over their last four home matches, creating 11 ‘big chances’, and one of these games was against Man. City where they took zero shots. Burnley managed a much needed win against Wolves in gameweek 32 while keeping a clean sheet, but the Clarets had conceded 12 goals in their previous five matches, and they have allowed opponents 80 shots over the last six gameweeks. Our Fix Algorithm predicts a point score of 4.8 for the Scotsman.