Salah tops the Custom Stats table for gameweek 33 with an xFPL score of 10.9. The Egyptian took three shots in the box (SiB), two of which were ‘big chances’ and he also attempted four assists. No player attempted more shots (six) or landed more shots on target (five) than Wood, the Kiwi notched an xFPL score of 10.5 (which may seem low), as only two of these attempts were ‘big chances’. Shaw was the league’s most creative player for the second gameweek running, the left-back attempted five assists, registering an xFPL score of 7.6. Werner also posted impressive numbers, the German was second only to Mané (six) for SiB (five) and was joint-top for ‘big chances’ (two). The German international posted an xFPL score of 7.3 and just might be beginning to find his feet in the English top flight.

2. The Clarets are flying

Only West Brom (10) have scored more goals than Burnley (eight) over the last four gameweeks. The Clarets have a favourable run in and their assets are compared using the Stats Sandbox feature over the last four gameweeks. It is no surprise to see their top scorer Wood leading the way at the summit of the table for goals (four), shots (20), SoT (10), expected goals (xG) (3.46) and xFPL (28.12). Vydra is a popular FPL option but his numbers are unimpressive. The Czech Republic international has attempted just four shots in as many matches and landed just two on target. In terms of creativity, McNeil leads the way with nine attempted assists and also comes in second for xFPL (16.72). Amongst their defenders, Lowton has impressed with four attempted assists and four shots.

Castagne has notched attacking returns in back to back gameweeks and the Belgian’s numbers are compared to other premium defender options over the last four gameweeks using the Fix Comparison Matrix. Shaw leads the way for creativity with 14 attempted assists but it is worth mentioning that not one of these was a ‘big chance’. In terms of FPL points (33), assists (two) and ‘big chances’ created (three), Alexander-Arnold leads the way. Castagne’s underlying numbers are unimpressive, the Belgian is fourth for attempted assists (five) and third for SoT (one). However, he is second for ‘big chances’ created (two) which indicates that although he is creating fewer chances, they are of high quality. 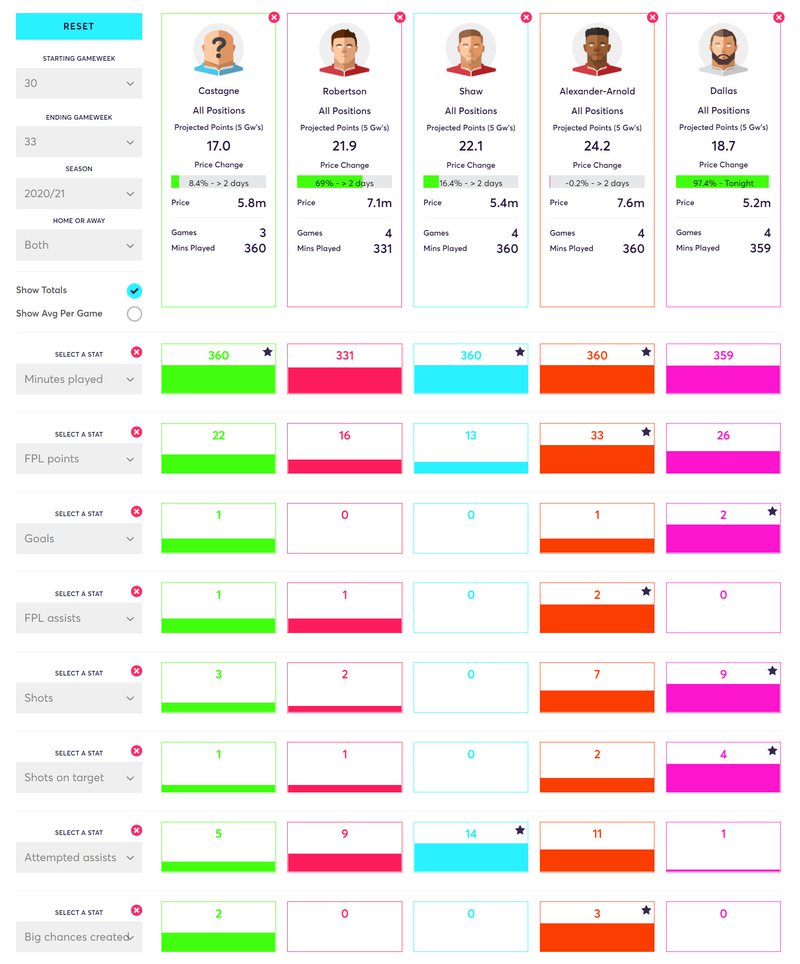