Kane has directly contributed to eight goals in the last six gameweeks (six goals, two assists), averaging 7.3 points per game (PPG). He trails Iheanacho by just a single Fantasy Premier League (FPL) point in that time (52 to Kane's 51) and has produced league-leading numbers of 30 shots, 13 shots on target (SoT) and eight ‘big chances’. Only Watkins (1.78) and Vardy (1.91) can better his 1.20 expected assists (xA) figure, amongst forwards. Kane is the most owned player in the top 1000 with 99.2% ownership as per our FPL Statistics feature. Spurs have scored 15 goals over the last six gameweeks and only Man. City (17) have scored more. Their total of 17 ‘big chances’ is only bettered by the league leaders (21). Their first opponents Everton have conceded just five goals over the last six gameweeks, keeping three clean sheets. However, the Toffees are ranked 15th for shots conceded (89) and 13th for SoT conceded (27) so Kane should still have plenty of opportunities. Southampton have conceded 13 goals over the same period and only Sheff. Utd (14) have been more porous. Meanwhile, it is only Leeds (31) and Sheff. Utd (41) who have allowed opponents more SoT than the Saints’ 30. Our Fix Algorithm currently projects a point score of 12.3 for Kane. 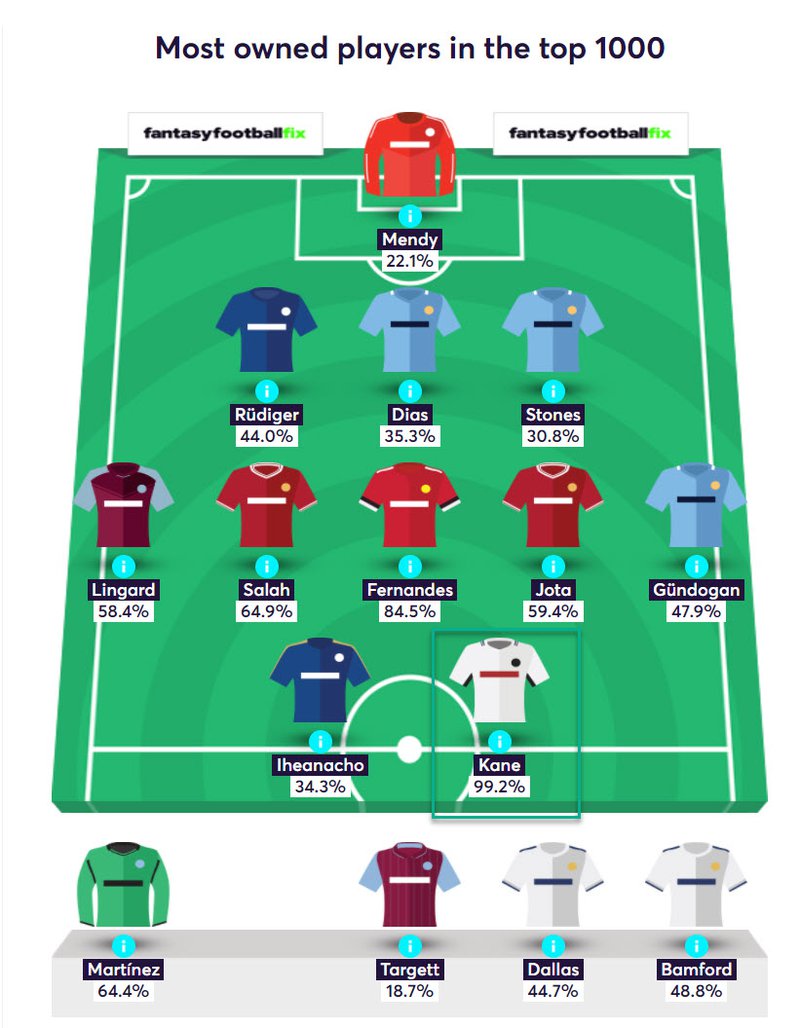 With seven goals in the last six gameweeks, no forward has amassed more FPL points than Iheanacho (52). The Nigerian only trails Kane for shots (30 to 21), ‘big chances’ (eight to seven) and expected goals (5.37 to 3.79) across that spell. His 30 touches in the opposition’s penalty box ranks joint-fifth amongst forwards, ahead of premium priced forward and teammate, Vardy, with 27. The Foxes are ranked top of the Fixture Analyser for the next four gameweeks so it is a great time to bring in the Nigerian. Leicester have scored 11 goals over the last six gameweeks and only Arsenal, West Ham (each 12), Spurs (15) and Man. City (17) have been more prolific. Their total of 14 ‘big chances’ is only bettered by West Ham (15), Spurs, Liverpool, Chelsea (each 17) and Man. City (21). West Brom have conceded just four goals over the last six gameweeks, keeping three clean sheets. However, the Baggies are ranked 14th for SoT conceded (29) and 13th for ‘big chances’ conceded (13) which indicates they have been riding their luck. Our Fix Algorithm currently projects a point score of 4.1 for the Nigerian.

Son took his goal well against Man. Utd, making his first start since recovering from the hamstring injury he sustained against Arsenal in gameweek 28. In the six matches prior, between gameweeks 23 and 27, the South Korean played a direct hand in four goals (one goal, three assists). As the Stats Sandbox shows, only De Bruyne (16), Lookman (17) and Raphinha (19) provided more than his 15 attempted assists in that time, while only Raphinha could equal his six ‘big chances’ created. Spurs have scored six goals over the last four gameweeks, only Leicester (seven), West Brom, Arsenal (each eight) and West Ham (nine) have fared better. They are ranked 10th for ‘big chances’ (seven) over that period. Everton have conceded just three goals over the last four gameweeks, keeping one clean sheet. However, they are ranked 14th for shots conceded (50) and eighth for SoT conceded (14). Southampton have conceded seven goals over the same period and only West Ham (eight), Fulham (nine) and Sheff. Utd (10) have been more obliging. Looking at their second opponents, Spurs (11), Palace (12) and Sheff. Utd (14) are the only teams to have allowed opponents more ‘big chances’ than the Saints’ 10. Our Fix Algorithm currently projects a point score of 9.8 for the Korean.

Following his first-half brace against Leicester, Lingard has now scored more FPL points than any other player since making his West Ham debut in gameweek 22 (82). No midfielder has landed as many as his 17 SoT during that period, while only Raphinha (19) and Salah (24) can better his 18 shots in the box (SiB). Gündogan, Mané (each six), Sterling (eight) and Salah (11) are the only midfielders to record more than his five ‘big chances’. He is the most transferred in player this gameweek as per our Transfer Stats feature with over 350,000 new owners. West Ham have scored 12 goals over the last six gameweeks and only Spurs (15) and Man. City (17) have found the back of the net more often. The Hammers’ total of 15 ‘big chances’ can only be bettered by Spurs, Liverpool, Chelsea (each 17) and Man. City (21). Newcastle have conceded eight goals over the aforementioned period, keeping just one clean sheet. The Magpies are ranked 13th for shots conceded (88) and SoT conceded (27) over those matches. Our Fix Algorithm currently projects a point score of 6.0 for Lingard. 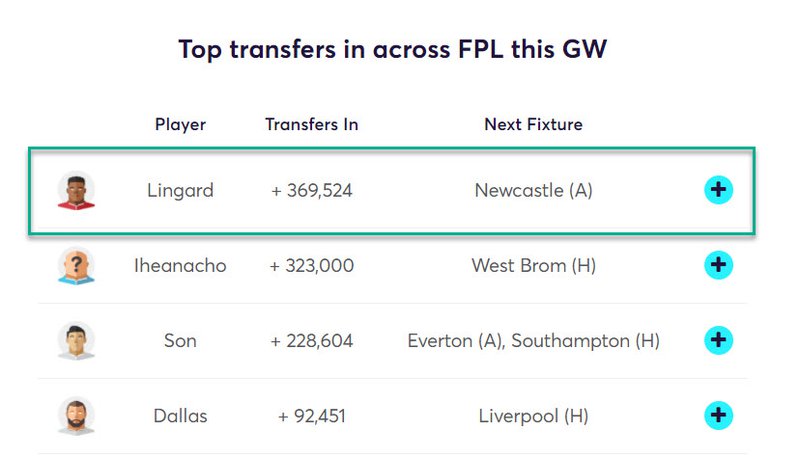 With four assists and six clean sheets in 20 appearances, Reguilón has earned an average of 3.7 points per 90 minutes this season. Amongst defenders, with at least 1000 minutes played, only Cresswell (0.33) and Digne (0.37) can better the Spaniard’s average of 0.22 assists per 90 minutes. He ranks third amongst teammates for attempted assists (14), which only ranks behind Kane (39) and Son (56). Spurs have conceded eight goals over the last six gameweeks, keeping three clean sheets. The London side are ranked 11th for shots conceded (81) and eighth for SoT conceded (24). Their first opponents, Everton, have scored just four goals over the last six gameweeks and only Fulham (three) and Sheff. Utd (two) have scored fewer. Meanwhile, Sheff. Utd (24) and Palace (22) are the only sides to have taken fewer SiB than the Toffees’ 36. Southampton have conceded eight goals over the same period and are ranked 14th for SiB conceded (45). Our Fix Algorithm currently projects a point score of 7.5 for Reguilón, the highest of any defender this gameweek.