Following his winning goal against Bournemouth, Jiménez has now scored four times in his last five league outings, where he has averaged 6.5 points per game (PPG). As the Stats Sandbox graph shows, no forward has taken more than his 19 goal attempts during that period, while only teammate Jota (34) has picked up more than his 31 Fantasy Premier League (FPL) points. The Mexican ranks just behind Calvert-Lewin for both shots in the box (SiB) (16 to 14) and expected goals (3.7 to 3.3). Wolves have scored nine goals over the last six gameweeks, and only six teams have scored more. Their total of 14 ‘big chances’ created is bettered only by Spurs, Burnley (both 16), Chelsea and Man. City (both 17). Villa have the worst defensive statistics in the league over the same period. No team have conceded more goals (12), ‘big chances’ (18) or shots on target (SoT) (35). Our Fix Algorithm currently projects a point score of 5.5 for Jimenez. 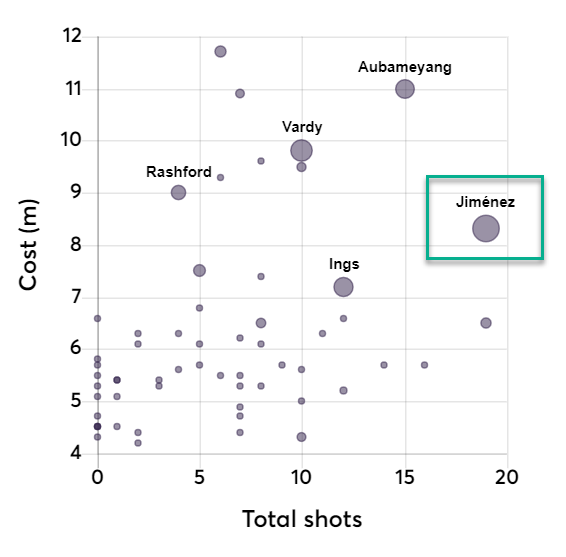 Aubameyang was denied by the crossbar against Southampton and has now gone four Premier League games without scoring for the first time in his career. The 31-year-old has averaged 5.3 points per game under Arteta, with six goals in 11 appearances since gameweek 19. Agüero (seven), Jiménez and Calvert-Lewin (eight) are the only FPL forwards with more goals in that time. As the Stats Sandbox shows, his tally of nine ‘big chances’ during that period ranks joint-seventh amongst players in his position. Arsenal have scored 11 goals over the last six gameweeks and only Man. Utd, Chelsea and Man. City (all 12) have scored more. Like Wolves, they have fashioned 14 ‘big chances’ over those matches. Norwich have conceded nine goals over the last six and only West Ham, Bournemouth (both 11) and Villa (12) have been more leaky at the back. Arsenal (33) and Villa (35) are the only teams to have allowed opponents more SoT than their 32. Our Fix Algorithm currently projects a point score of 5.4 for the Gabon international.

Hat-trick hero Martial now has six goals in seven Premier League matches since the arrival of B. Fernandes. Only Doherty (58) has amassed more than his 52 FPL points in that time. Amongst midfielders, the Frenchman ranks behind only Richarlison (18) and Salah (19) for SiB (17) and only Alli (seven) can better his 6 ‘big chances’. Salah is the only player that has had more touches in the opposition’s box (68 to 38), and he is the most transferred in player this week as per our Transfer Stats feature. Man. Utd. have scored 12 goals over the last six gameweeks, joint-top with Chelsea and Man. City. They only trail the aforementioned two teams (Chelsea 37, Man. City 39) for SoT (34). Brighton have conceded just four goals over the last six gameweeks with only Leicester (three), Wolves and Man. Utd. (two) conceding fewer. The Seagulls have conceded 17 SoT and eight ‘big chances’ over those matches. Our Fix Algorithm currently projects a point score of 4.3 for the Frenchman. 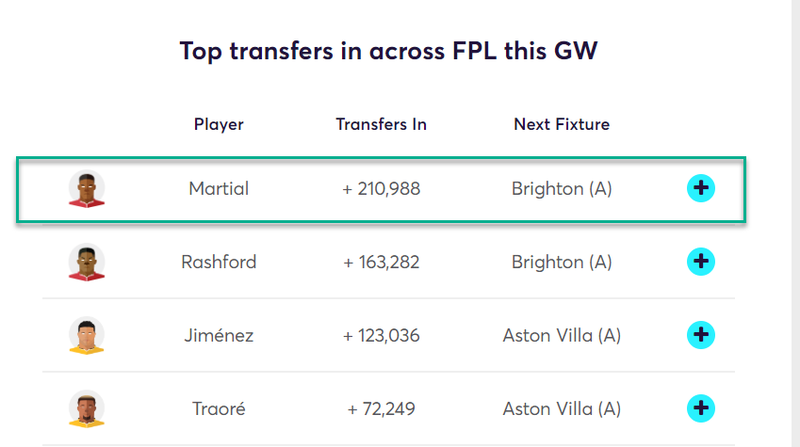 After his two contributions against Palace (one goal, one assist), Salah now has eight goals and three assists in 11 matches this calendar year (since GW21), where he has averaged 7.9 PPG as per our Fix Heatmaps feature. He ranks top amongst FPL midfielders for SoT (17) and SiB (36) during that period, while only Martial (eight) and Dele Alli (nine) can better his seven ‘big chances’. Meanwhile, the Egyptian has created a league-high total of nine big chances. Liverpool have scored 10 goals over the last six gameweeks and only Arsenal (11), Man. Utd, Chelsea, and Man. City (all 12) have been more prolific. Chelsea (64) are the only team to have taken more SiB than the Reds’ 59. Their opponents Man. City have conceded just four goals over the last six gameweeks but have conceded 11 ‘big chances’ over those matches. Only seven teams conceded more. Our Fix Algorithm currently projects a point score of 4.2 for the Egyptian. 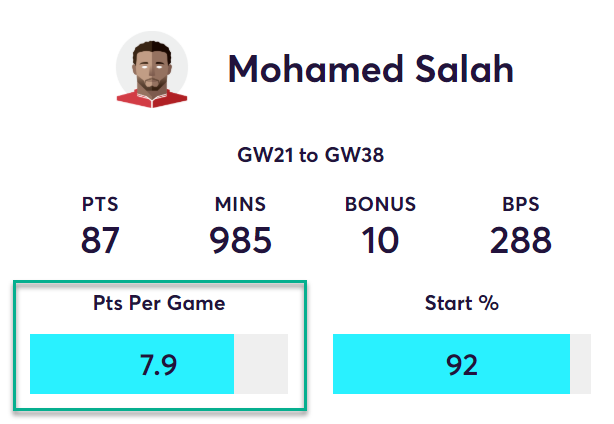 No FPL defender has picked up more points than Doherty over the last six gameweeks, where the right-wing-back has averaged 8.7 PPG. Only van Dijk (four) and Ritchie (six) have fired more than his three SoT, while van Aanholt (11), Alexander-Arnold and Robertson (each 13) are the only defenders able to better his eight attempted assists. He’s beaten only by Alonso for touches in the opposition’s box (20 to 18). Wolves boast the best defensive record in the league over the last six gameweeks, conceding just two goals and keeping five clean sheets. No team conceded fewer ‘big chances’ (four) or SoT (15). Villa have been woeful in terms of goal scoring of late, with just four goals in the last six gameweeks, and only Norwich (one) have scored fewer. Norwich, (17), Bournemouth (15) and Sheff. Utd (14) are the only teams to have landed fewer SoT than their 18. Our Fix Algorithm currently projects a 40% chance of a Wolves clean sheet and a point score of 5.2 for Doherty.